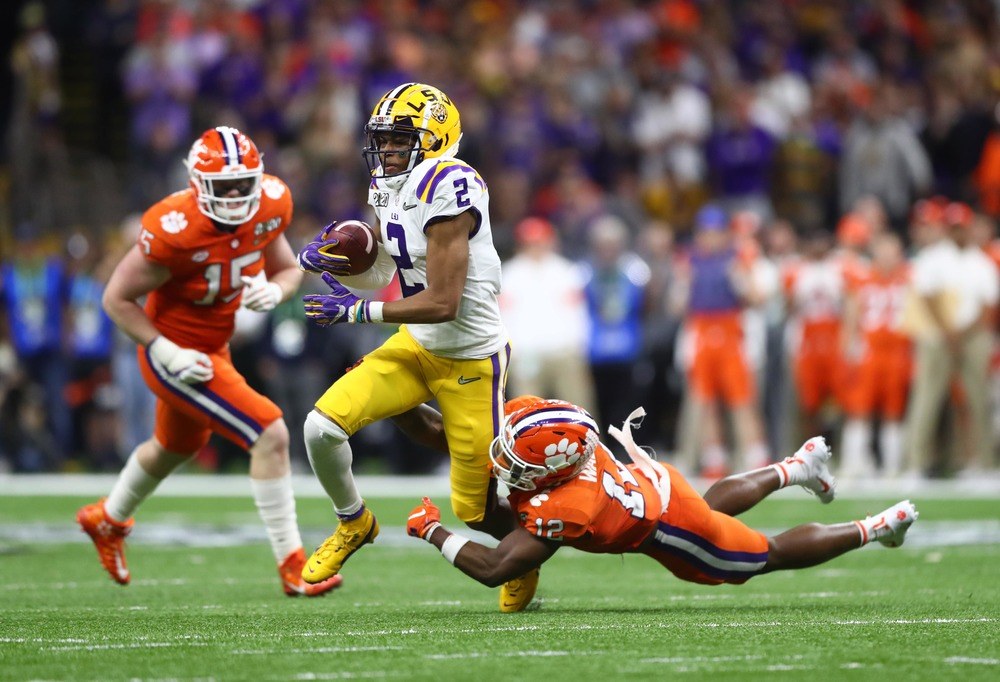 There was no ACC opponent awaiting Clemson on Monday night in New Orleans. Even Ohio State paled in comparison to what head coach Dabo Swinney’s squad faced in the College Football Playoff final. As Clemson found out the hard way, LSU was something it had never seen before in 2019-20. The ACC champions were no match for the beasts of the SEC.

There was never any real chance that Clemson’s defense would be able to stop LSU. The Fiesta Bowl champions’ only hope was to contain the Bayou Bengals. And even that was more of a prayer than a realistic goal. For a brief moment, Clemson did manage to keep Joe Burrow and company under wraps. LSU punted on its first three possessions, including two three-and-outs and a grand total of only one first down.

After that, though, arguably the best team in college football history returned to its normal self. LSU scored touchdowns on four of its next five possessions, surging into halftime with a 28-17 lead. In the second half, head coach Ed Orgeron’s juggernaut punted twice but then found the endzone on two of its next three possessions (the other resulted in a missed field goal). Burrow’s scoring strikes to Thaddeus Moss and Terrace Marshall Jr. put the game away for the nation’s top-ranked team, which triumphed 42-25 to capture its first national title since 2007-08.

The Heisman Trophy winner completed 31 of 49 attempts for 463 yards and five touchdowns. Moss hauled in two of the TDs and so did Ja’Marr Chase, who finished with nine receptions for 221 yards. Justin Jefferson also caught nine passes, turning those into 106 yards. Clyde Edwards-Helaire went for 164 yards from scrimmage (110 rushing, 54 receiving). LSU simply had too many weapons, just as it did for every one of its other 14 opponents.

The 42 points allowed by Clemson marked its worst defensive performance of the season (in the regular season North Carolina’s 20 were the max, after which Ohio State scored 29 in the semifinals). Of course, 42 is not a bad effort against a team that had poured in at least 50 on seven occasions.

What undid the country’s No. 3 team was an inability to convert opportunities on offense. Twice in the first half failed to score when it had the lead and the ball. In the second half, Trevor Lawrence and company pulled to within three points and had the ball, but they could not sustain a drive. The defending national champions last five possessions of the game went punt, punt, punt, punt, fumble.

They did not get any help, either. Linebacker James Skalski was ejected for targeting in the third quarter. On one LSU touchdown drive, Edwards-Helaire turned a small gain into a big one after the refs failed to see that his had touched out of bounds. Early in the fourth quarter, a 48-yard touchdown pass from Lawrence to Tee Higgins was called back due to a questionable offensive pass interference penalty.

Regardless, Lawrence was simply not good enough to beat a team like LSU. He wasn’t even one of the best players on the field. The sophomore overthrew 13 passes, finishing 18-for-37 for 234 yards with no touchdowns or interceptions. He rushed for one of Clemson’s three touchdowns, but three touchdowns were not enough to compete with LSU.

Not on Monday night. And not at any point this entire season.