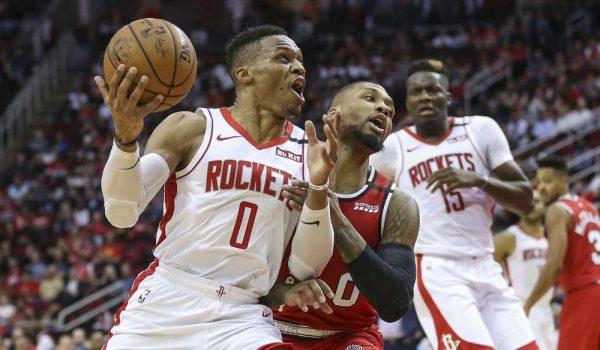 We have a solid seven-game slate tonight in NBA DFS. However, there are quite a few games that project to be blowouts tonight, which makes things more interesting when it comes to lineup construction. We also have three teams that have team totals over 120 points with the Pelicans, Rockets, and Lakers. This article will help with cash game lineup construction on both FanDuel and DraftKings for Friday night’s slate. I will list my top expensive play ($8,500+), mid-level play ($6,000-$8,400), and my top punt option for tonight’s DFS slate. Let’s begin by taking a look at the player I am paying up for in my cash game lineup.

Russell Westbrook Worth the Price in DFS

The Houston Rockets enter today’s game with a team total of 122.5 points, which projects to be the second highest-scoring team on tonight’s DFS slate. Westbrook has been one of the best guards all season, and that should be the case once against tonight with Luka Doncic being out for the Mavericks. I look for Westbrook to be the highest-scoring point guard tonight.

We have seen Williamson’s minutes increase since his first game (18, 20, 27, and 29), which means this could be his first game in which he sees more than 30 minutes. The Pelicans project to be the highest-scoring team in the NBA tonight with a team total of 124.5. The Grizzlies have played poorly against opposing forwards this season, ranking 24Oth in fantasy points allowed to power forwards. I look for Williamson to have his first double-double of the season and to return massive value in DFS tonight.

We might be going with the under in this game as one of our NBA Picks. However, I love the Pelicans in this spot tonight. They enter this game projected to be the highest-scoring team tonight, and I think they will be. JJ Redick is an excellent punt option that could get a 5-6x return on value at his low salary, which is why he is my favorite punt option for tonight’s DFS action.

After their 86-83 triumph, the Milwaukee Bucks are right back in the series against the…
View Article

Let me tell you what I don’t like about this game. We can’t get a…
View Article