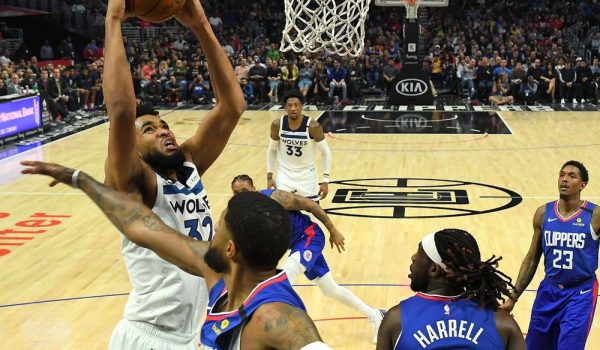 There’s a lot of options to build your GPP tournament lineups around tonight as we have a ten-game NBA slate. Seven teams have team totals of 115 or more, and many players will be under-owned on those teams. I will give you my top expensive play ($8,500 or more), mid-level play ($6,000-$8,400), and my top play that I will be building my GPP tournament lineups around on DraftKings and FanDuel for tonight in the NBA. We’ll begin by taking a look at the top guy I’m using in GPP tournaments tonight.

There are a lot of cheaper options on tonight’s NBA slate at the center position that I think will be more owned than KAT will be. However, Karl Anthony Towns has one of the best match-ups tonight. The Timberwolves project to be the 3rd highest-scoring team tonight when they face the Charlotte Hornets. The Hornets have struggled all season against opposing big men as they are allowing the 3rd highest fantasy points to the position this season. This game is one of our top NBA Picks to go over the total, which is another reason KAT is my top guy for tournaments tonight.

The Minnesota Timberwolves are the team stack that I am going with tonight. I think Minnesota goes over their projected team total, and I think they could be the highest-scoring team in the NBA tonight. The Hornets are allowing the 8th most fantasy points to the shooting guard position, which makes Russell one of my favorite targets tonight. I also look for other shooting guards such as Bradley Beal and Devin Booker to be more owned than Russell tonight, which sets up an excellent way to differentiate our lineups in GPPs.

If KAT and Russell are going to play their full minutes and avoid a blowout win, then the Hornets are going to have to keep up the pace. Devonte’ Graham is an excellent option if you want to pay up for a Hornets player. However, I love Rozier to be under-owned in this spot even though the Timberwolves are allowing the 10th most fantasy points to the point guard position. I’m punting with Rozier, and I think he produces massive GPP value for tonight’s slate.