NFL Draft 2020: Which Offensive Lineman will get drafted first and second? 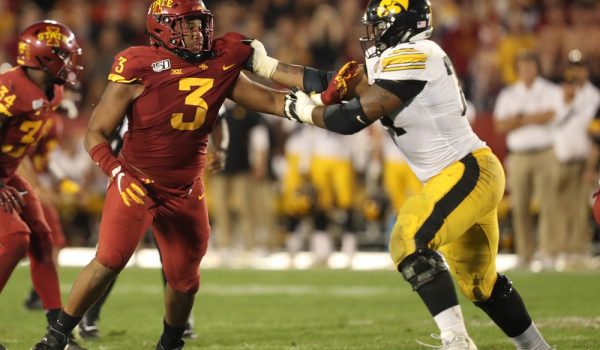 With the NFL slowly turning into a pass-happy league, it is crucial teams address the offensive line.

We saw the Los Angeles Rams take a gamble on a young Offensive Line protecting Jared Goff, which resulted in the team missing the playoffs just a year after their Super Bowl run. Case in point, having a strong Offensive Line is a key to a long playoff run.

There are many good options upfront in this draft class, as many as six or seven Offensive Lineman are expected to go off the board in round one.

Let’s take a look at who will get drafted first and second in this year’s draft and improve their respected new team.

Bet on which Offensive Lineman will get drafted first

You can bet on which Offensive Lineman will get drafted first at DraftKings, the current betting odds are:

Arguably the best Offensive Lineman heading into the 2020 NFL Draft. He quickly adapted with Iowa and started 35 games in total for the Hawkeyes. Throughout his career with Iowa, he earned an honorable mention in the All-Big Ten, 2019 second-team Associated Press All-American and Big Ten Offensive Lineman of the Year honors. His 6-5 320 pound size frame is perfect for protecting the blind side of any offense.

There is a strong reason there are high expectations for Wirfs, especially with him having a 40-yard-dash time was faster than three tight ends and having higher vertical than two of the top wideouts in this class. Expect Wirfs to be drafted within the first ten draft picks. The New York Giants is the perfect landing spot to help protect their franchise quarterback Daniel Jones.

Which Offensive Lineman will get drafted second?

There is always at least one Offensive Lineman representing the Crimson Tide during the first day of the NFL Draft, this year that job belongs to Jedrick Wills.

Wills quickly made a name for himself in Alabama and has been one of the best right tackles in the SEC for the past years. He started in 28 games for the Crimson Tide and had one of the most impressive times at the Combine with a 5.05 – 40-yard dash time and 34.5 vertical jump.

There are a lot of teams who need right side protection, including the New York Jets and Arizona Cardinals. Both teams are still building around their respected franchise quarterbacks, and making sure the right side is protected is a must. I can easily see Wills being the second Offensive Lineman drafted, heading either to the east coast with the Jets or west coast with the Cardinals.