NFL Draft 2020: Which Tight End will get drafted first? 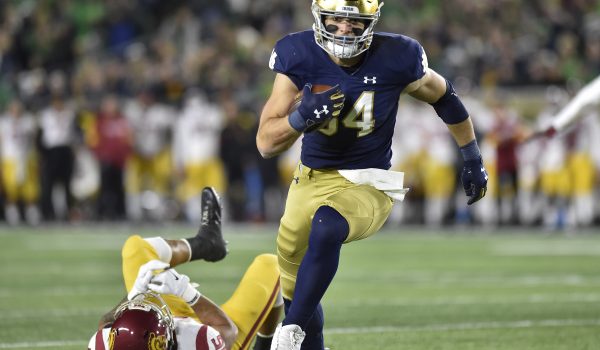 Let’s take a look at some of the best offenses in the league: Kansas City Chiefs, Baltimore Ravens, and San Francisco 49ers. Do you know what all these teams have in common? They have a two-way tight end that can block and be a threat in the open field. Travis Kelce, Mark Andrews, and George Kittle are just a few tight ends in the NFL that proved they can enhance any offense and more.

With the 2020 NFL Draft on the horizon, teams will be looking to find the next hidden gem for the tight end position. This draft class has loads of Tight End talent, and anyone of the top five TE’s has a strong chance of getting drafted first. Check out our Round 2 Mock Draft ahead of Friday’s NFL Draft.

Bet on which Tight End will get drafted first

You can bet on which Tight End will get drafted first at DraftKings, the current betting odds are:

As stated above, the Tight End draft class is so close in terms of value and production that any of the top five core could get their name called first. Back in 2019, there was a Tight End that headed the class in T.J. Hockenson, but in 2020, it is a much closer race. Even though the competition is tough, there is one tight end that should get drafted first over others.

Meet Cole Kmet out of Notre Dame. The dual-sport athlete was supposed to return to school in 2020, but made the bold choice to enter the NFL draft and has a solid shot to be the first Tight End off the board. What I love about Kmet is the dual-threat value he holds at the position. He is a safe choice that will get it done. He is the tallest tight end on the board but proved he can still move at his size. He had the fourth-fastest 40-yard dash (4.70), best vertical jump (37″), and second-best broad jump (10’3″) at the position. With making a splash at the combine, let’s take a look at what he did with the Irish.

As a freshman, he focused more on baseball as he only played in 13 games as a reserve on the football team. He caught two passes for a total of 14 yards. However, his focus switched as a sophomore as he played in 11 games with 15 receptions, 162 receiving yards. With realizing Kmet can be in the passing game, Notre Dame gave him the opportunity and more as he caught 43 passes for 515 passing yards and six touchdowns. He may not have the best-receiving stats compared to the other prospects, but he can block and block anybody. I would be surprised if Kmet gets drafted a bit earlier as teams are looking for the best well-rounded tight end.

Several teams are lacking in their tight end depth. Looking at Kemet’s draft stock, he could go as early as the late first round to the Jacksonville Jaguars. However, if he does not land with the Jaguars, expect the Chicago Bears to make a move for him in the early second round as they recently released TE Trey Burton before the NFL Draft. With quarterback Nick Foles now in Chicago, expect the front office to get him a reliable weapon in Kmet.