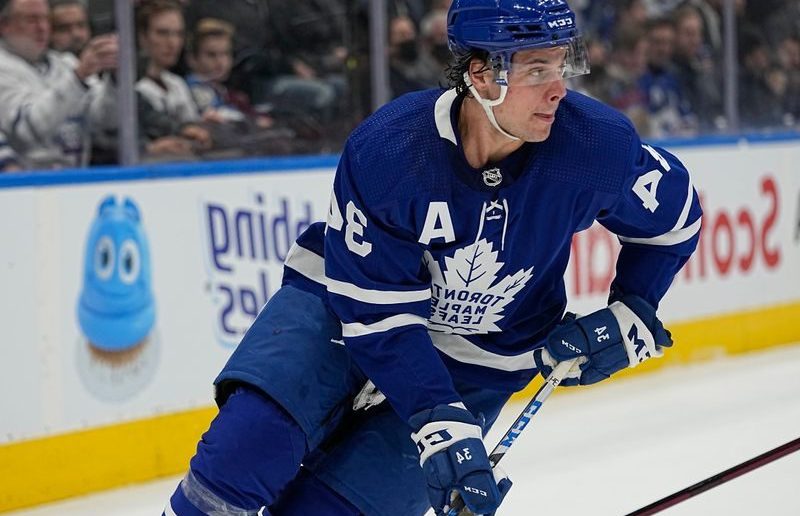 There are 10 games tonight in the NHL, and we are going to take a deeper dive into two of the matchups and choose two player props we think will provide good value and will have a great chance of hitting. Games are starting at 1:00 pm ET and the final game of the night starts at 10:00 pm ET.

Matthews is starting to heat up and has found himself back in the Rocket Richard race after a three goal game on Wednesday. He’s currently on a four game goal streak and has scored six times in that stretch. He’s starting to find his groove and he’s getting great chances every night. Matthews is a versatile goalscorer, he has a great shot but he can also score in tight, which makes him dangerous in every matchup. On the powerplay, he still remains the number one shooting option for Toronto, and in the last few games, he’s been switching between the left and right flank, making it difficult for goalies to track him and establish a solid shooting pattern. He’s averaging just over three minutes on the powerplay per game. Both of these teams are on a five game winning streak heading into tonight, this will be an extremely competitive matchup, and both teams’ top players will need to show up if they expect to win.

In six career games against the Wild, Matthews has totaled four goals. This is the first time these two have played each other in nearly two years, so Matthews will be looking to pick up right where he left off when he ended with one goal and one assist in a 4-1 win. At +110, bettors might be getting a bargain for what he’s been able to do in the last four games this season. Take Matthews to score at least one goal.

Be sure to check out our full game preview for the Toronto Maple Leafs vs. Minnesota Wild

This player prop is a bit riskier, however, +120 provides great value for Josi hitting the under for his shot totals. Oddsmakers may be overvaluing his shots after a monster game on Thursday where he had nine shots on goal, but that shouldn’t steer bettors away from this under. In his last five games, he’s had two or fewer shots on goal in three of those games; including two of his last three games. He overachieved last game in the shot department, and despite being one of the best defencemen in the game, sometimes it’s important to tone the shots down, especially when you find yourself winning. Last game, the Predators were shut out by the Bruins which should explain Josi’s shot total. They were desperate for all and any attempts on the net. Now that they’re playing the Montreal Canadiens tonight, it’s unlikely they find themselves trailing, let alone being scoreless again. A premium will be put on good defensive abilities and if the Preds take a lead, don’t expect Josi to be making many offensive plays. For example, two games ago the Predators won 6-0 against the Blue Jackets and Josi totaled just one shot on goal.

The Habs are 2-9-1 on the road and are already a team that struggles to score goals. If Josi can play a solid 25 minutes tonight in a shutdown role, it should be an almost guaranteed victory for Nashville. Don’t expect Josi to be very offensive tonight; take under 2.5 shots on goal.

Be sure to check out our full game preview for Montreal Canadiens vs. Nashville Predators