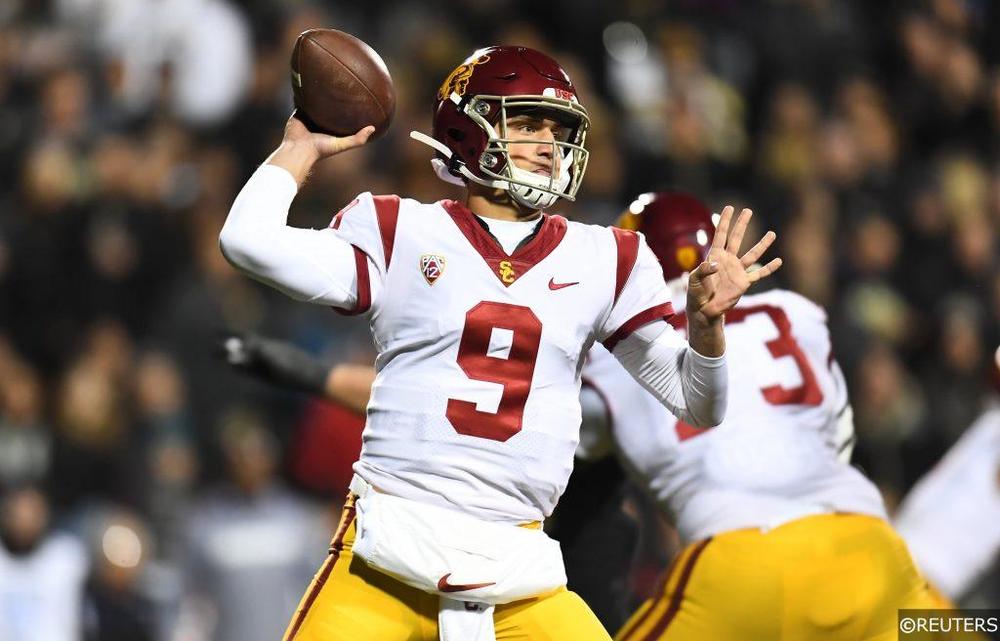 Another glorious fall Saturday is upon us. That means we have a full slate of college football action. There are a number of intriguing matchups on the docket, and the Top 25 rankings could get a bit of a shake-up.  It is sure to be an exciting weekend, so let’s take a look at some of our bets bets for Saturday’s slate.

Along with these plays, be sure to check out all of our full game previews with picks on sides and totals for all games in the Power Five conferences and top 25 teams outside of Power 5.

Arizona is really bad. The Wildcats are in the running for worst team in the FBS, starting the season 0-7. Not only have they not won a game, but they average just 14.3 points per game. They have a turnover differential of minus-11, and average only 339.4 yard per game of total offense. Their defense is not any better. The Wildcats allow 30.4 points per game and 362.3 yards per game. They have particularly struggled in conference play, as their average margin of defeat against PAC-12 teams is 19.75 points.

The Trojans are 3-4 and looking to reach the .500-mark in this one. USC is coming off a 31-16 defeat to rival Notre Dame. Rivalry losses always sting, so look for the Trojans to come out with a little bit of extra fire on their home turf. They are 8-0 SU and 6-2 ATS in their last 8 meetings against Arizona. USC is not great, but they are more than capable of handling an inferior opponent.

Last year’s matchup between these teams featured 38 total points in a 27-11 Indiana win. That was when the IU offense was clicking on all cylinders. This year has been a different story. The Hoosiers have scored a total of 28 points in 4 Big Ten games. That is not ideal. Granted, their 4 conference opponents thus far have been Ohio State, Michigan State, Penn State, and Iowa. Those defenses are a lot better than Maryland’s, but we really have no idea what we are going to get out of the Indiana QB position this week. Michael Penix Jr is still week-to-week with a shoulder injury, and backup Jack Tuttle suffered an ankle injury last week against Ohio State. True freshman Donaven McCulley and walk-on Grant Gremel both saw action at QB after Tuttle exited. Look for the Hoosiers to have a bit of a conservative game plan regardless of who is at QB. Even with Penix Jr in, it’s not like the Hoosiers were setting the world on fire offensively.  Only Northwestern and Illinois are scoring fewer points per game in the Big Ten than Indiana’s 20.1 points per game.

On the other side, the Maryland offense has scored 14, 17, and 16 points in their last 3 games. QB Taulia Tagovailoa got off to a red-hot start, but cooled off dramatically with a stretch of 8 interceptions in 3 games. He didn’t throw one last week against Minnesota, but Indiana’s defense is capable of giving him some issues. They picked him off 3 times last year, and they held Michigan State to 241 total yards and Iowa to 303 total yards so far this season.  The under is the play.

Northwestern had a very strong season last year, but things have been much tougher in 2021-22. Normally stout on the defensive side of the ball, the Wildcats are allowing opponents to rush for more than 220 yards per game and have surrendered an average of 33.5 points in conference play. Minnesota comes into this one on a bit of a roll as they’ve won 3 straight following their upset loss to Bowling Green. The Gophers rushed for an astounding 326 yards last week to boost their per-game average on the year up to 210.9. Defensively they’ve also been impressive, ranking in the top 5 in run defense and giving up more than 26 points just once.

Minnesota is 4-2-1 ATS this season, and have covered 5 straight games on the road. Northwestern has been abysmal this season against any team that has a pulse, as they’ve failed to cover in 5 of their 7 contests. Not only has their defense been horrid, but their offense has been even worse, averaging just 14 points in 4 conference games. Look for the Golden Gophers to establish the run early and often and cruise to a double-digit victory.