Final Four: UCLA Bruins In-Depth Breakdown, How They Can Win The NCAA Tournament 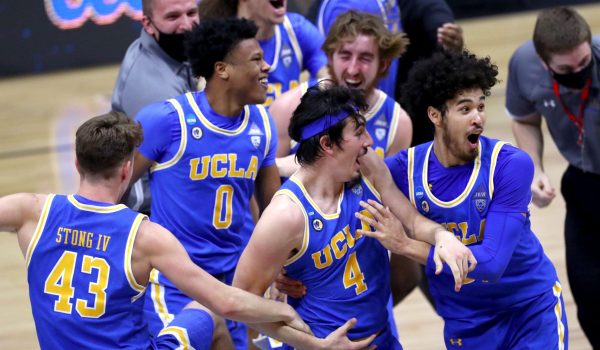 This season has been quite the rollercoaster for UCLA. Many people forget that the Bruins were ranked 22nd in the preseason AP Poll. They then lost their leading scorer from last season, Chris Smith, just eight games into the season. Yet here they are, in the Final Four for the 19th time in school history and the first time since 2008. You can’t say they haven’t earned it — they’ve won five games to the other teams’ four, including two in overtime.

Let’s dive into their season so far, and how they could potentially cut down the nets on Monday night.

The Bruins’ season so far

As mentioned above, UCLA forward Chris Smith tore his ACL just eight games into the season. Smith was projected to be a focal point of the UCLA offense, so Mick Cronin needed to adjust the offense on the fly. It worked, as UCLA’s offense carried them to success this year. The Bruins currently rank 13th in Kenpom’s adjusted offensive efficiency, led by Tyger Campbell and Johnny Juzang. Campbell ranks 71st in the country in assist rate and Juzang has averaged 18.6 points per game since the start of February.

However, it hasn’t been an easy path for UCLA, as the Bruins lost their last four games heading into the NCAA Tournament. This led to them finding themselves on the bubble, but they were fortunate enough to make it into the First Four. They trailed Michigan State by 11 points at halftime of that first game but came back to win in overtime. Since then, they’ve knocked off BYU, Abilene Christian, Alabama, and Michigan, and now find themselves matched up against undefeated Gonzaga.

FROM THE FIRST FOUR TO THE FINAL FOUR IN DRAMATIC FASHION 🤯

Drop a ♥️ if you've cashed in on the Bruins in any point this March!!👇

How UCLA can win the National Championship

Obviously, UCLA needs to beat Gonzaga to even make the National Championship game, which is a tough ask. Gonzaga is currently a 14-point favorite over UCLA, so the chances are very slim. In my opinion, UCLA has essentially one chance to knock off Gonzaga, and that is with transition defense. Per Hoop-Math, Gonzaga takes the highest percentage of their shots in transition of anyone in the country. Per Synergy, they rate as the 10th best team on a points-per-possession basis in transition opportunities. If you can’t keep the Zags out of transition, you’ll be blown out just as their first four opponents were.

Luckily for UCLA, they rank 52nd in the country in not allowing transition opportunities to their opponents, and rank in the 92nd percentile in defending those opportunities. UCLA’s slow-tempo and ball-security could give them a puncher’s chance in this game, but they’ll likely need another super-human effort from Juzang.

If UCLA can pull off the miracle, they’ll face the Houston-Baylor winner. It will be another tough game, but nowhere near as tough as the one against Gonzaga. Beat Gonzaga, and UCLA will have a chance to complete the unprecedented 7-0 record in the NCAA Tournament.