There is plenty of great horse racing action to look forward to across America on Thursday, including at Aqueduct race track. We are up 171.25 units dating back to Aug. 5. Let’s maintain the momentum!

A son of Empire Maker, he’s finished second on all three of his starts thus far. Most recently at Aqueduct, he stumbled at the start and was unlucky to bump into a smart rival, finishing clear in the runner-up spot. There are no such rivals in his way today and he sets a daunting standard for these rivals to aim at. He does have the wide draw, but he can overcome that to deservedly force his head in front.

A perfect two out of two thus far, Claudio Gonzalez’s filly can be expected to maintain her unbeaten record. Winning her debut at Pimlico in April, she bettered that performance by landing a claiming contest at Monmouth when last seen in June. That absence is a small concern, but her recent work at Pimlico has really caught the eye. She’s seemingly improved for the layoff and with Victor Carrasco in the saddle, she’s a strong candidate.

Just the one win from six starts for Christophe Clement’s son of Bernardini but he’s run to a very high standard. That includes a placed effort at stakes level and most recently, he finished second at today’s $82,000 level at Aqueduct. He only found one too strong that day and cutting back in trip may suit on that evidence. He remains lightly-raced and drawn ideally toward the inside, he does look overpriced under Manny Franco.

The two short prices in this race are drawn in the two inside stalls and Authorize can justify favoritism. A son of Curlin, he was well-backed to make a winning debut at Belmont last month. He looked set to do so, but after making the running, he was nailed in the final jumps. Although frustrating on the day, it was a smart performance and he can only be expected to build on that, With natural progress, he can readily make it second-time lucky. 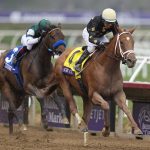