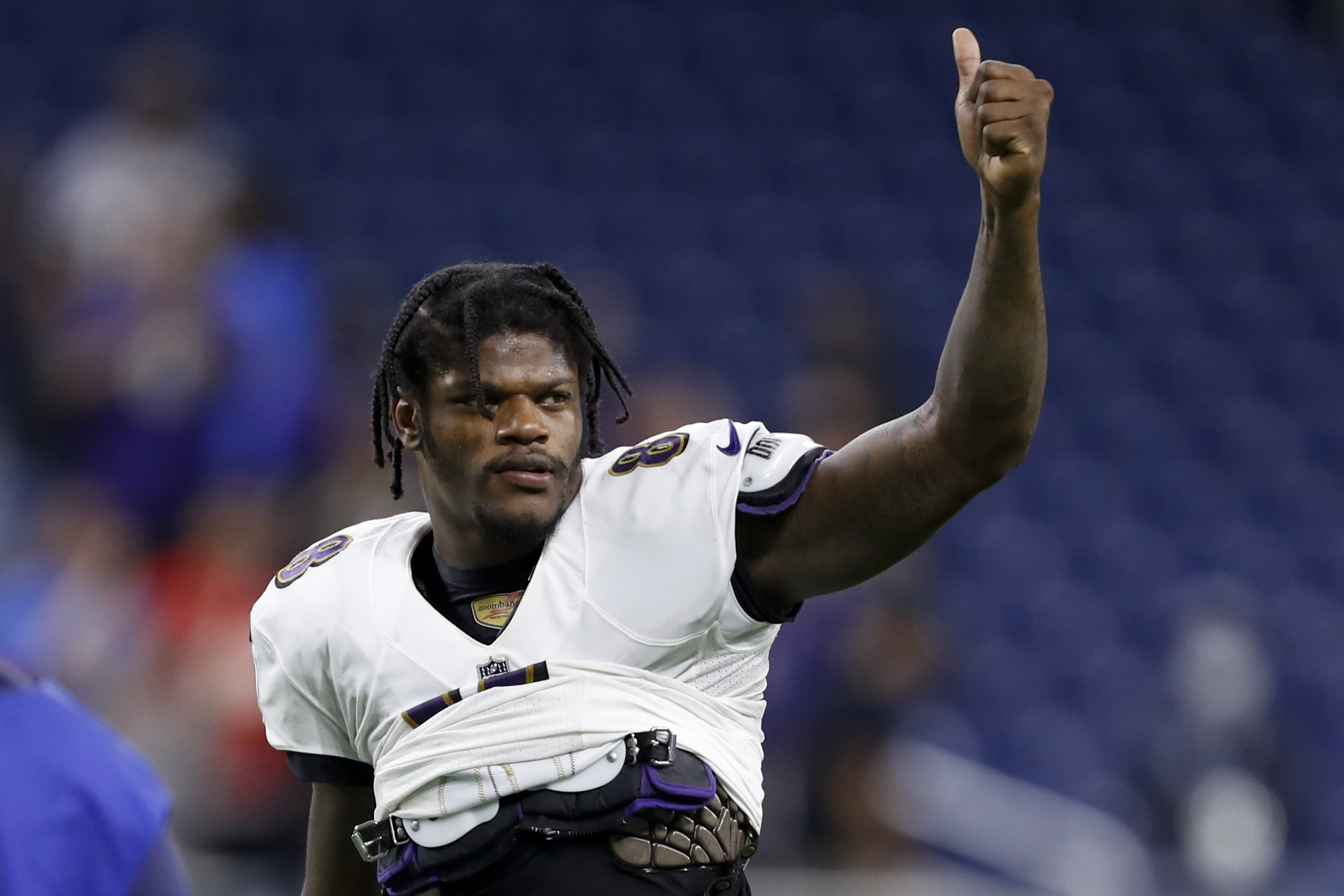 Just like that, Week 10 is here and the second half of the NFL season officially gets underway tonight. Following a hard-fought, comeback victory over the Vikings last week, the Baltimore Ravens travel south to take on the Miami Dolphins in a battle of two teams trending in opposite directions. The Ravens have won six of their last seven and continue to assert their dominance over the AFC, while the Dolphins — who finally ended a seven-game losing streak with a win over the lowly Texans — may be forced to play without starting quarterback Tua Tagovailoa. He continues to nurse a finger injury. Tagovailoa is a game-time decision, so we’ll have to wait until closer to kickoff for the final word. Still, when it comes to a showdown slate, we have plenty of high-quality options and a few decent bargains to help build that winning lineup.

Jackson continues to dominate at the quarterback position thanks to his rushing capability and the Ravens’ lack of a true ground game. He is averaging 75 rushing yards per game and is coming off his second 100-yard effort. Add that to an improved passing attack where he is averaging 276 passing yards per game with 13 touchdowns through the air and you’ve got everything you…and everyone else…wants in a captain.

The Dolphins cover corners have not been strong this year and that goes for both the outside and the slot. Brown lines up all over the field so expect John Harbaugh and Greg Roman to find the mismatched coverage throughout the night. Brown always finds a way to get open downfield for a big score and tonight won’t be any different.

If you want to stay with Baltimore but need to pay down a little at the top spot, then Andrews certainly makes for a fantastic play. Miami ranks 28th in DVOA against the tight end, allowing an average of 77.8 receiving yards and 14.1 fantasy points (ninth-most) per game to the position. Let’s also not forget the eight red-zone targets over the last five games.

If you’re looking to save even more at the top spot and go a little contrarian, then Gesicki is the move. The Ravens have struggled against the tight end all season, ranking 22nd in DVOA against the position while allowing almost 80 receiving yards and the second-most fantasy points per game to the position.

He’s the darling of the fantasy community and has been serviceable in the three games he’s played thus far. He’s seen 20 targets which he’s turned into 12 catches for an average of 53.7 yards per game, though he has yet to find the end zone and has just one red zone target. Still, he’s garnering attention while Sammy Watkins is sidelined and should continue to perform at a strong level.

Waddle spends most of his time working out of the slot which also happens to be a weakness of the Ravens, who rank 15th in DVOA against the slot-receiver and allow an average of 57.6 receiving yards per game to them. Slot corner Tavon Young has had his struggles throughout the year and doesn’t match up well, at least on paper, against the Dolphins rookie.

He was serviceable during his time under center this season and had some decent passing days against Tampa Bay and Indianapolis. This match-up is a little tougher, but should be able to move the ball through the air with short passes to Waddle and Gesicki. Brissett also has the ability to run one in on his own, so with the Ravens allowing the eighth-most fantasy points per game to the quarterback position, he’s definitely worth a look. If Tagovailoa does manage to play, you can give him some consideration — but it’s going to be difficult to trust his accuracy given the nature of the injury.

The Ravens may only be giving up an average of 91.1 rushing yards per game, but they’ve allowed nine rushing touchdowns this season and nose tackle Brandon Williams is still banged-up. The Ravens also rank 31st in DVOA against running back pass-plays, allowing nearly 60 yards per game to them. Gaskin saw six targets from Brissett last week and should continue to see a number of check-downs and designed screens.

We’re moving into some ugly territory here, but you can’t deny the fact that Freeman has been the leader of this backfield with Latavius Murray sidelined. Freeman has responded well with touchdowns in each of his last three games. You won’t see a dominating performance here, but the Fins have allowed an average of 111 rushing yards per game this season with nine rushing touchdowns allowed.

It’s another ugly choice here, but Bell saw an increase in touches this past week and has two touchdowns in his last three games. Again, the Ravens backs don’t rack up the yardage — but they are routinely called upon once the Ravens get inside the green zone.