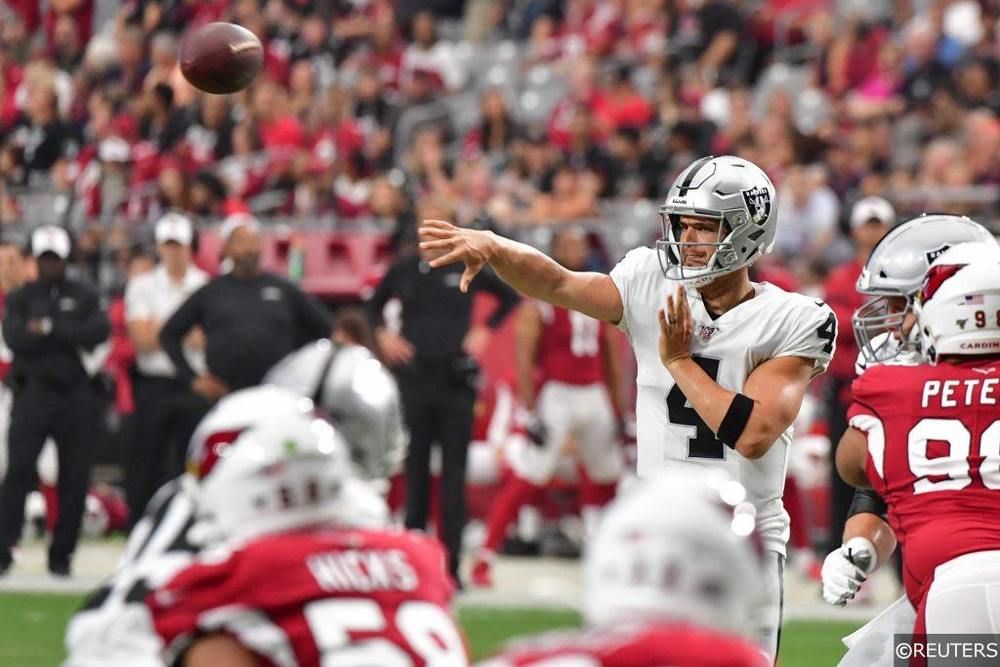 Last week was decent on FanDuel with 121 points. However, it was a hit or miss type of week in the majority of cash games. We cashed in the majority of the contests, though, which is always a good thing. This week we will look to have better performance and get above the cash line of all competitions. We will examine the top value plays this week on FanDuel for Week 9’s main slate in the NFL. Let’s begin by taking a look at the quarterback position.

Derek Carr ($7,300) Raiders: The Oakland Raiders have been solid offensively these past two weeks, mostly due to the running game. However, the passing offense hasn’t been terrible either, and I look for the Raiders to have a solid game offensively through the air against the Lions on Sunday. Detroit ranks 31st in passing yards allowed per game and 29th in passing yards allowed per attempt. I look for Carr to have a good game offensively in this game and to have a good return on value in this spot.

Mark Walton ($5,700) Dolphins: Walton is one of the better value options at the running back position this week. He took over for Kenyan Drake as the starting running back in Miami. The Dolphins have been one of the worst teams in the NFL this season. However, this week, they are playing a team that is equally as bad in the New York Jets. The Jets are allowing 94.86 rushing yards per game, yet they just traded one of their better defensive linemen, so that number is likely to increase the rest of the season. At $5,700, Walton has an excellent opportunity to return decent value at the position this week.

Darren Waller ($6,800) Raiders: Darren Waller has been one of the best tight ends in the NFL this season as he has 46 receptions for 496 yards and three touchdowns. This week the Raiders will be taking on the Detroit Lions in what should be a prolific passing game. The Lions rank 31st in the NFL in passing yards allowed per game and 29th in passing yards allowed per attempt. This game sets up nicely for Waller, and I expect him to have one of the biggest fantasy weeks for a tight end this season.

Frank Gore ($6,200) RB Bills: The Buffalo Bills are the biggest favorites on the slate for week 9 in the NFL. Buffalo takes on the Washington Redskins in a game in which they are favored by 9.5 points and a game that has a point total of 37. Vegas projects the Bills to have a heavy run-based offense on Sunday against the Redskins. Buffalo is 7th in the NFL in rushing yards per game and 8th in rushing yards per attempt. Meanwhile, the Redskins have struggled all season stopping the run as they rank 27th in rushing yards allowed per game and 21st in rushing yards allowed per attempt. I look for Gore to play hug dividends in fantasy this week and is a lock for week nine on FanDuel.

Broncos ($4,300): This Denver team is not a typical Broncos team as they have struggled to get to the quarterback this season. However, that shouldn’t be the case on Sunday as they will be going against a team that is allowing the 10th most sacks in the NFL this season. Baker Mayfield has also struggled to stay consistent this season. As a result, I will be paying down for the Denver Broncos in this spot as I look for them to return decent value in this game on Sunday.

Allen Robinson ($7,200) WR Bears: The Bears have struggled offensive this season with Trubisky at quarterback. However, this week they take on one of the worst secondaries in the NFL in the Philadelphia Eagles. The Eagles rank 27th in passing yards allowed per game and 22nd in passing yards allowed per completion. Robinson has been the most consistent offensive weapon the Bears have this season. As a result, I look for Robinson to have a reliable performance on Sunday against the Eagles.

Danny Amendola ($6,000) WR Lions: Everyone knows about Marvin Jones’s performance in this passing offense two weeks ago and Kenny Golladay’s performance last week. However, not many are talking about the consistency that Danny Amendola has shown on the offense. He leads the Lions in targets over the past two weeks with 19, which he has caught 16 of those passes for 200 yards. He hasn’t found the end-zone, but this could be the week for that as the Lions will be going up against the Oakland Raiders. The Raiders 30th in the NFL in passing yards allowed per game and 31st in passing yards allowed per attempt. I look for Matthew Stafford and the Lions to have a huge game passing the ball on Sunday, and at $6,000, Amendola represents significant value on Sunday.