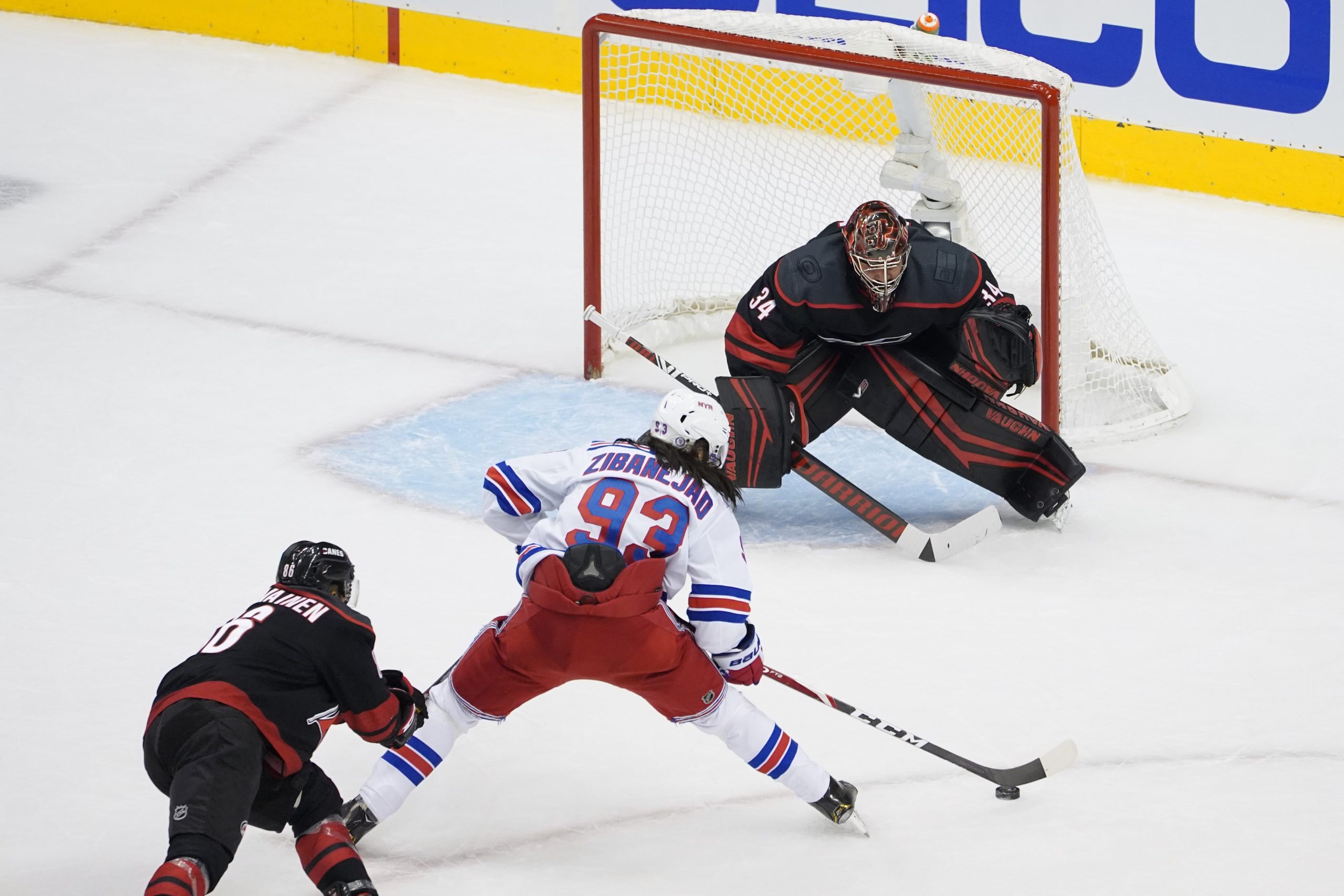 Both the Rangers and Hurricanes were pushed to a Game 7 in the first round, and ultimately prevailed. They are familiar foes and had several hard-fought games towards the end of the season. New York showed great mental toughness coming back from a 3-1 series deficit to defeat the Penguins, while the Hurricanes were dominant on home ice by winning all four of those games in the first round. That’s where this series begins on Wednesday night.

The Rangers are a balanced, complete team that utilizes their skating talent to the fullest in front of their world-class goaltending. They made a big splash at the deadline by acquiring Andrew Copp from the Winnipeg Jets, who made an immediate impact. New York is widely regarded as one of the best defensive teams, but it does not lack in the offensive department either.

New York finished the regular season with five skaters either above or nearing an average of 1 point per game. Chris Kreider was one of those skaters ,and is even more recognized for his goal-scoring. He finished the season with 52 goals, the 3rd-most in the league behind only Auston Matthews and Leon Draisaitl. Kreider was heavily assisted by Artemi Panarin and Adam Fox, who had 74 and 63 assists, respectively. Those values were the fourth and tenth-best in the NHL, demonstrating just how potent that trio has been. Along with longtime Ranger Mika Zibanejad’s 81 points in 81 games and Copp’s 18 points in 16 games with his new team, the Rangers pose a threat to any opposition.

However, it would be a disservice to New York to not mention their world-class goaltender, Igor Shesterkin. He finished the season with a .935 save percentage, the best in the league, and was a nearly -4000 favorite to win the Vezina trophy for best goalie. He was even named a Hart trophy finalist for the league MVP, something that rarely happens for goaltenders. Most Rangers fans would admit that he has carried the team to this point by leading them to the second-best goaltending mark in the league, allowing just 2.49 goals per game.

Breaking down the Carolina Hurricanes

Just as the Rangers aren’t a one-trick pony, neither are the Hurricanes. They stormed through their competition with a combination of speed, stick skills, and all-star defenseman. Carolina’s defense was led by goaltender Frederik Andersen, who has been injured throughout the postseason thus far. However, they have not missed a beat.

One thing that assisted Carolina’s goaltending was its shot-blocking. The Hurricanes allowed just 28.2 shots per game, the fewest in the league, which helped lead them to allowing just 2.44 goals per game, also the best in the league. Backup goaltender Antti Raanta played in 28 games in the regular season, and has carried over his success in Andersen’s absence. He ended the first round with a .927 save percentage, and allowed just 12 goals in a seven game series.

It also helps that Raanta has some serious skating talent in front of him. The young duo of Sebastian Aho and Andrei Svechnikov is going to be one that is feared for years to come. They’re both in their early 20’s and already averaging just about a point per game. Along with Teuvo Teravainen, the trio combined for 89 goals and 215 points. One unique thing about the Hurricanes is that they use Svechnikov to run the point on their power play unit. This is significant as it allows them to keep all of their primary wingers on the ice for the most efficient shot-taking possible.

Carolina also has one of the best defenders in the league in Tony DeAngelo. With his talent and shot-blocking, it’s no surprise the Hurricanes ended the season with a penalty kill of 88%, the best in the league. They’ll need to use that to its full effectiveness to hold off the Kreider and the Rangers in this series.

While the prediction is for the Hurricanes to win this series, it seems like a bit of a steep price for how even these teams are. Therefore, I would suggest looking for a prop of the Hurricanes to win in either 6 or 7 games. This series may very well end up being another classic. With the 2 best defensive teams in the league, these should be hard-fought games. The difference lies in the home ice advantage. After seeing how dominant the Hurricanes were on home ice in the opening round, that should be what gets them over the edge in this round as well. They outscored the Bruins 18-6 in the games that were in Carolina, and only one of them was not a multiple-goal victory.

With the first couple of games being at home for the Hurricanes, I would also suggest locking in this bet early, as they may get off to a quick 2-0 lead before the Rangers win a game. Shesterkin was not in his regular season form in the first round, even getting pulled in back-to-back games. These teams are rather even, but the Hurricanes are more consistent and should squeak out a series win in Game 7.