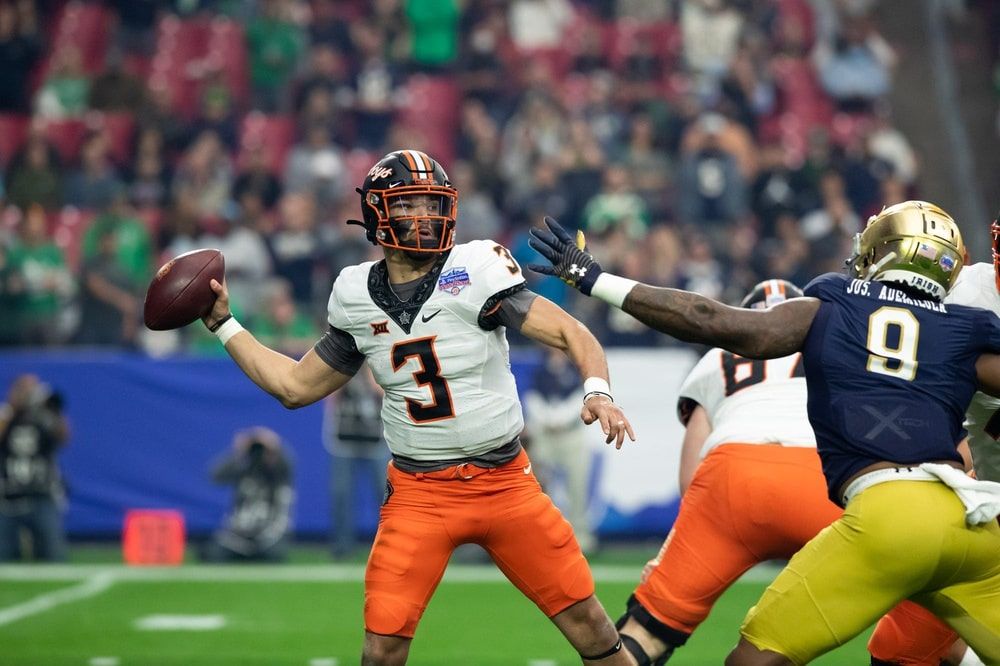 The Oklahoma State Cowboys were one of the most surprising teams in the 2021 season. Because of their success, they earned a matchup with Baylor in the Big 12 Championship – where they came up just short of a game-winning touchdown in the waning seconds of the 4th quarter. With ample turnover on the roster, the Cowboys will have their work cut out for them if they want to replicate last season’s winning ways in 2022.

Can Oklahoma State get back to the Big 12 Championship for the second straight year? With the college football season just a couple weeks away, it is time to analyze the Oklahoma State Cowboys.

The Cowboys are 90/1 to win the National Championship. They have the same odds as Florida, Oregon, LSU, and Miami (FL).

Oklahoma State is the third-favorite to win the Big 12 at +550. Only Oklahoma and Texas have better odds to win the conference.

The Cowboys finished the regular season with an 11-1 record before falling inches short of winning the Big 12 Championship and securing a potential College Football Playoff berth. A large part of the Cowboys’ success was due to their defense. Led by defensive coordinator Jim Knowles, this unit ranked 2nd in first downs allowed per game, 4th in opponent yards per game, and 10th in opponent points per game. Furthermore, the Oklahoma State defense held 8 of 12 regular season opponents to 20 points or less.

Offensively, coach Mike Gundy deployed a run-heavy attack led by dual-threat quarterback Spencer Sanders, who passed for 2,389 yards and 20 touchdowns while accumulating 668 rush yards and 6 rushing touchdowns. However, Sanders did struggle with accuracy, as he threw 12 interceptions and completed just 62% of his passes – which ranked 60th out of 110 eligible quarterbacks. Running back Jaylen Warren was an integral part of the rushing attack as well, accumulating 1,441 total yards and 11 touchdowns, while wide receiver Tay Martin (80 receptions, 1,046 yards, 10 touchdowns) was the best pass catcher in Stillwater. As a whole, the offense averaged just 5.4 yards per play – which ranked 77th out of 130 college football teams. The Cowboys were also turnover prone as they ranked 71st in turnover margin and 96th in turnovers lost.

Looking forward to this season, the defense is going to look a lot different and will likely regress from its 10th overall ranking in opponent points per game. The Cowboys lost more than 300 combined defensive starts, as well as their coordinator – as Knowles left Stillwater to take the same position at Ohio State. Knowles was replaced by highly-regarded defensive mind Derek Mason, but the Cowboys are projected to return just 4 defensive starters. They will also have to replace 6 of the 8 leading tacklers from a year ago, including their two leading tacklers in linebackers Malcolm Rodriguez and Devin Harper. Overall as a unit, the Cowboys bring back just 40% of the production from last year’s defense.

With the defense losing so much talent, Oklahoma State will need more reliable production from Sanders and the offense. Sanders returns for his senior season but the offense returns just 55% of its production as a whole from last year. Furthermore, the Cowboys lost Warren and Martin to the NFL, which will present big shoes to fill for running back Dominic Richardson and the young wide receivers that remain in Stillwater.

Oklahoma State won 6 of 8 games last year by 1 score and have another 8 games that are currently projected to be between a pick and 8-point spread this season. Without its veteran defense or esteemed defensive coordinator to rely on, Oklahoma State could struggle in those projected one-score games – making its conference win total appear a bit lofty. Look to fade the Cowboys in conference play, especially if the offense does not show signs of improved efficiency.