Taking a look at the past 5 Mr. Irrelevant NFL draft picks 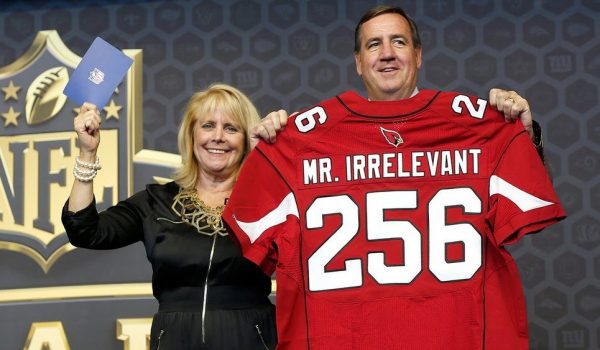 The NFL Draft is one of the most popular sporting events in the world as football fans are ready to tune into the three-day event. Starting on Thursday, April 23, lasting until Saturday, April 25, potential draft prospects are hopeful of landing on an NFL team and continuing their football career. Even though the final two rounds might be a bit slower than the first few rounds, there is someone important everyone should tune in during the final draft day.

What is Mr. Irrelevant in the NFL Draft?

The final draft pick has been crowned Mr. Irrelevant since 1976 as Kelvin Kirk was the first-ever Irrelevant pick. With being Mr. Irrelevant, they are also given a free week in Southen California to spend with their families at Disneyland, golf tournament and a comedy club roast, but with the current situation of COVID-19 that might be put on hold. Bettors are about to go all-in on the NFL Draft as all sports have come to a standstill.

Who was the last five Mr. Irrelevant?

Let’s take a look at the past 5 Mr. Irrelevants and see where they are now.

The Arizona Cardinals were the last team on the clock in 2019 and decided to pick TE Caleb Wilson out of UCLA. For Wilson, he did not make the cut with Arizona and was released before the start of the season. At the moment, he is signed with the Washington Redskins but has yet to see any pro playing time.

The Washington Redskins were the last team on the clock in 2018 and decided to pick WR Trey Quinn out of SMU. Quinn saw the field over the past two seasons with the Redskins with appearing in 15 games. In those 15 games, Quinn has caught 35 passes for 273 receiving yards and two touchdowns.

The Denver Broncos were the last team on the clock in 2017 and decided to pick QB Chad Kelly out of Easy Mississippi Community College. For Kelly, he stayed on the Broncos for two seasons with zero playing time. He is looking to get his chance this season as he is a member of the Indianapolis Colts.

The Tennessee Titans were the last team on the clock in 2016 and decided to pick CB Kalen Reed out of Southern Miss. Reeds only playing time came with the Titans during the 2016 and 2017 season as he played in seven games. Unfortunately he could not stay on the active roster and joined the Seattle Seahawks in 2018 and signed a one-year deal in 2019. At the moment, Reed is currently a free agent.

The Arizona Cardinals were the last team on the clock in 2015 and decided to pick TE Gerald Christian out of Louisville. Christian did not see any playing time in 2015 due to an injury and missed the roster in 2016. He signed a new contract with the Buffalo Bills and appeared in three games before he was cut in 2017. Arizona gave him one more chance in 2017 but did not make the roster again. Christian is currently a free agent.

NFL 16 days ago
Who will trade for Carson Wentz? Odds, best bets and predictions

NFL 20 days ago
$55 Million Challenge – Play For A Free Instant Prize Of Up To $25k During The Big Game!