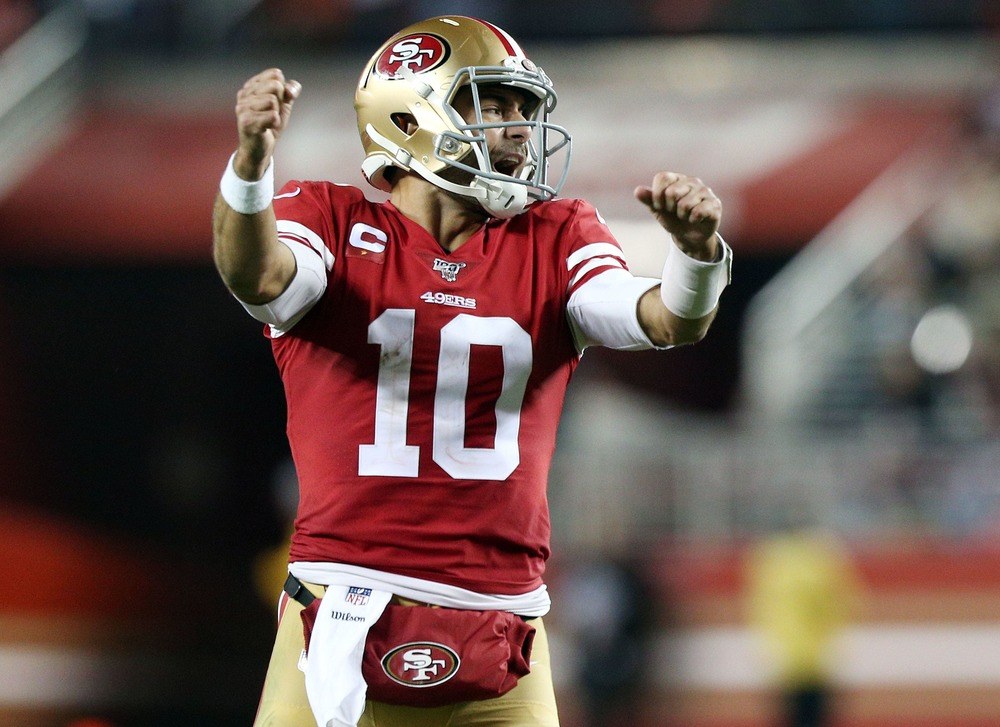 The first NFL win totals are out for the 2020 season, giving us something to help tide us over until sports are back. The NFC West profiles as possibly the most exciting division in all of football, and that’s what we’ll be breaking down today. For previous installments of this series where we go division by division, check out our ‘NFL News‘ tab.

The 49ers won the NFC West last year and made it all the way to the Super Bowl, so we’ll start with them. For a few reasons, I’m expecting some regression. Jimmy Garoppolo is a game-manager who needs everything set up for him by Kyle Shanahan, and San Francisco’s flirtation with Tom Brady this offseason shows they aren’t fully sold. The defense should take a step backward, as they traded away All-Pro defensive tackle DeForest Buckner for a draft pick due to cap constraints. All their spending last season left them unable to make very many moves this time around, and letting Emmanuel Sanders walk will greatly downgrade their receiving corp. I don’t see them winning 11 games.

The Seahawks are another team I’m expecting some regression from. They caught an incredible series of breaks last season, which isn’t something they’re going to be able to replicate. Somehow only one of their 11 wins last year were by more than one possession, which isn’t sustainable. They’ve got Russell Wilson, but not a whole lot else. The defense needs major work, and it looks like they might lose Jadeveon Clowney on top of their other issues. The coaching staff and particularly offensive coordinator Brian Schottenheimer are archaic, and are holding Wilson back. If their running game is even a little worse than it was in 2019, they’re in big trouble.

I understand the reasons for skepticism about the Rams and that they’ve lost a lot of their defense from last season. That being said, I think oddsmakers might be overreacting a bit. Given the way the defense played last season the departures might not be a bad thing, and they’ve still got Aaron Donald after all. They managed to win nine games last year despite a lot of things breaking against them, and Sean McVay is still one of the best coaches in the game. Moving on from Todd Gurley won’t hurt the offense at all, and it should actually make it easier to establish the running game they lacked all of last season. Robert Woods, Cooper Kupp, and Brandin Cooks form an elite receiving trio, and tight end Tyler Higbee came on really strong late last season.

The Cardinals had the best offseason of any team in the NFC West. They pulled off one of the best trades in recent NFL history, acquiring Deandre Hopkins from the Texans for only a second-round pick while dumping David Johnson’s contract in the process. With Hopkins and Larry Fitzgerald, the Cardinals have arguably the best receiving duo in the league now. Kyler Murray showed plenty of flashes as a rookie, and he should take a big step forward in his second year in Kliff Kingsbury’s system. They also made major upgrades on defense, signing guys like Jordan Phillips, Devon Kennard, and De’Vondre Campbell.

The pick: Over. This is my favorite play in the division.