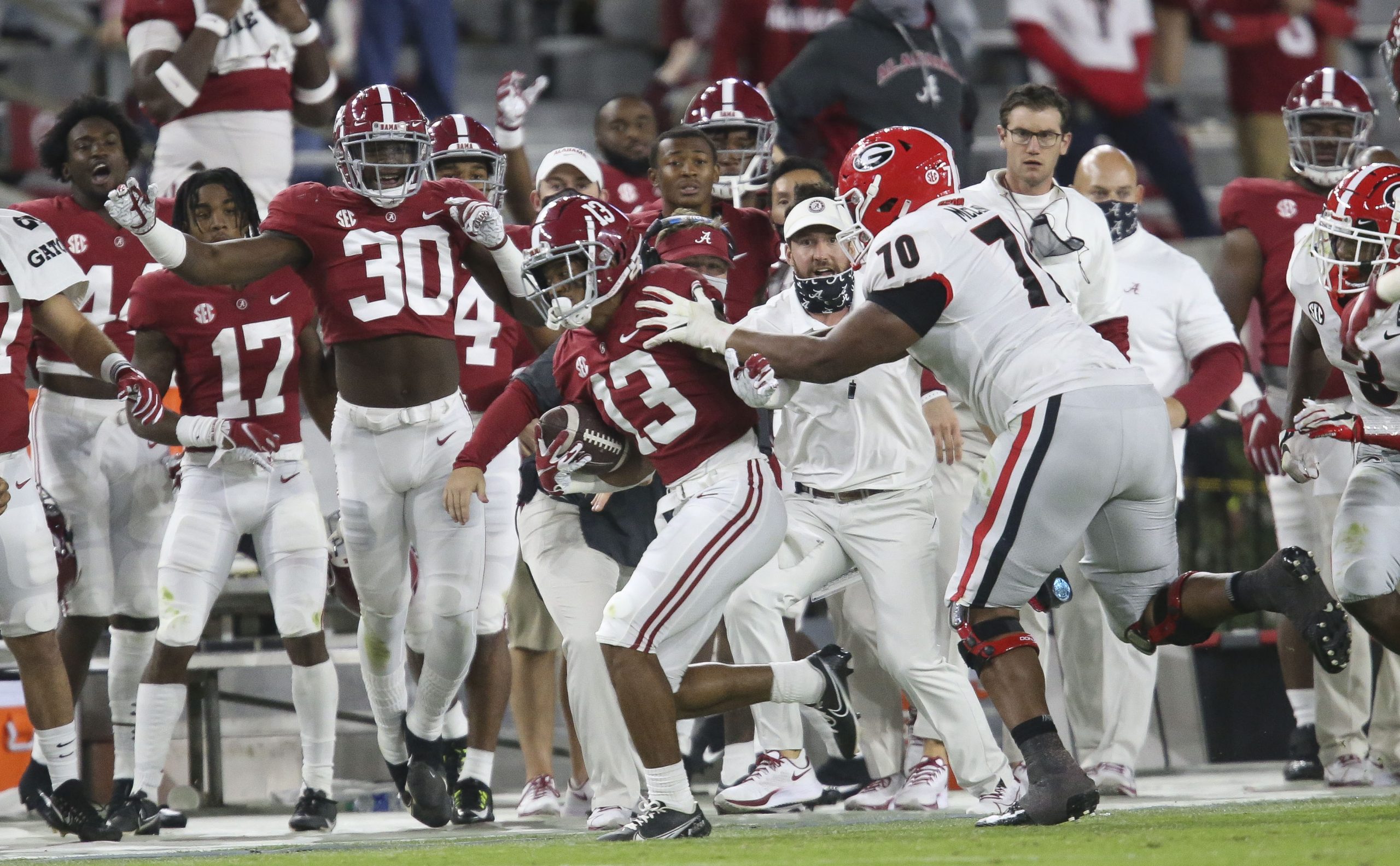 It’s the biggest game of the college football season so far, and it isn’t even close. The seemingly unstoppable Georgia Bulldogs take on the reigning champion Alabama Crimson Tide in the SEC Championship game. After getting the scare of its life last week against Auburn, Alabama knows it is teetering on the edge and that defeat on Saturday could rule the Crimson Tide out of the College Football Playoff. As for Georgia, a statement win could go a long way in terms of momentum heading into the CFP.

To enhance the excitement for this huge clash, 5 of Pickswise’s best college football experts have weighed in with their best bets for the game. That’s 5 great picks, all right here!

You can also check out our full game previews for every championship game this weekend, but for now let’s dive into our experts’ best bets for Georgia vs Alabama.

Make sure you read our extended preview for the CFB game of the week: Georgia vs Alabama

This line moved 3.5 points from Circa’s lookahead of Georgia -3 a couple of weeks ago. The move is in response to Alabama’s uneven performance in the Iron Bowl, where the Crimson Tide needed a late comeback and then four overtimes to beat Auburn. It’s just the second time in the last 12 years that the Crimson Tide weren’t favored in the SEC title game, when they were a 1-point underdog also against Georgia in 2015. The Bulldogs deserve to be favored, and the public agrees, but I think the line has gotten a little stretched and if it does get to 7, it likely won’t be there for long. There’s no denying how dominating Georgia has looked this season, but I’m confident the ‘Bama coaching staff — which has infinitely more experience in these games — will have the Tide ready for a potential upset.

My best bet for the SEC Championship game is Georgia -6.5. Georgia held opponents to 6.9 points per game this season and I expect the defense to step up in a big way in this game. Alabama’s offensive line struggled against Auburn, allowing seven sacks, and Georgia’s front seven is even more talented. It’s going to be a long day for Bryce Young and the Alabama offense. This Alabama team is not the same caliber squad that we have seen in the past. I expect Kirby Smart to finally beat Nick Saban and for Georgia to cover on Saturday.

Usually Under bets are the best way to go in Georgia games. In this case I think Georgia is the even better play. To be clear, both Georgia and the Under are strong bets — just as they have been all season long when the Bulldogs are playing. But I will give a slight lean to the Dawgs covering 6.5 as even more of a lock than Under 50.5.

This Alabama team is not Alabama of old. The Crimson Tide’s resume just isn’t very good. They are No. 3 in the nation because they are “Alabama” and it would be a crime against humanity if they get into the College Football Playoff with 2 losses simply because of their name. They lost to Texas A&M, beat Florida by 2, LSU by 6, Arkansas by 7, and Auburn by 2. Georgia utterly destroyed the common opponents. The Bulldogs boast arguably the best defense in college football history (6.9 ppg allowed) and their one-two running back punch of Zamir White and James Cook will put up more than enough points to beat Alabama by at least a touchdown. UGA -6.5 is the best bet of the game — and quite honestly it’s the best bet of the entire championship week.

Georgia is currently a -6.5 favorite in most markets, which marks the first time in Alabama’s last 93 outings in which it is the underdog entering a game. With that being said, I believe this is a good spot to take advantage of exactly that. Georgia’s defense has been one of the best in recent history stats-wise, but they haven’t faced much competition from opposing offenses this season. And the Bulldogs definitely haven’t faced a quarterback like Bryce Young. I actually like Georgia to win this one outright, but giving this many points to the Crimson Tide? That sounds like free money to me.

I think Georgia still has value at any number under a touchdown, but my favorite bet for this game is the Under. Georgia’s defense is second to none in college football this season, and the Bulldogs have held seven of their opponents to a season-low point total. The Alabama running game may be compromised if Brian Robinson Jr. is unable to play at full strength, and Bryce Young and the vulnerable Crimson Tide offensive line have not yet seen a defense of this caliber. The same can be said for Stetson Bennett against the Alabama front seven, and it’s fair to expect a Georgia game-plan that consists of running the football early and often. I like the under at any number down to 49 and I would look at a first-half under, as well.
Don’t forget to check out our roundtable with five CFB experts giving their predictions for which teams will reach the College Football Playoff!