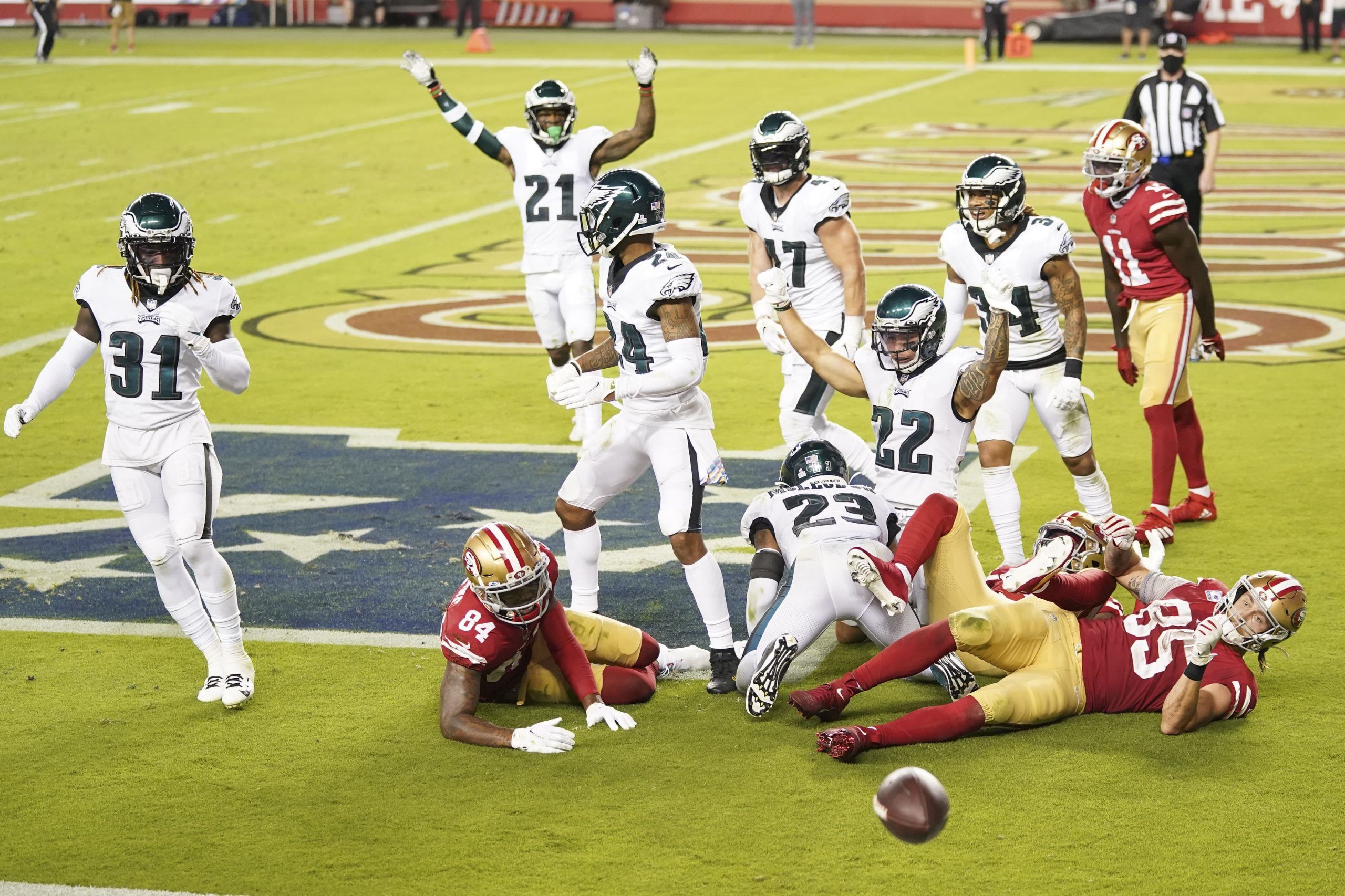 The San Francisco 49ers lost as large favorites on Sunday Night Football, falling 25-20 to the Philadelphia Eagles. While at first glance a 2-2 record through four games might not seem like much to panic about, the situation is worse than it seems.

The defending NFC champions are in major trouble, and if things don’t get turned around in a hurry it’s going to be a lost season. Their two wins this season have come against the Jets and Giants, who are a combined 0-8 on the year. Granted Jimmy Garoppolo didn’t play on Sunday night, but even when they had him for a full game in Week 1 they looked out of sync as they lost to the Cardinals.

HUGE turnover for #flyeaglesfly and Eagles spread bettors like ourselves 😤

Injuries just keep piling up – and the defensive line is decimated

The 49ers have suffered a devastating rash of injuries through the first month of the season. Luckily George Kittle returned from his knee injury Sunday, but that’s where the good news ends. The defensive front was the engine behind their Super Bowl run last year, and that unit in particular has been hit hard.

Nick Bosa is of course done for the year, as is Solomon Thomas. Against the Eagles, it looks like the defensive line picked up another season-ending injury. Ian Rapoport of NFL Network reported that pass-rusher Ziggy Ansah is believed to have a torn bicep, which will sideline him for the rest of the year. Ansah was the splash signing they made to address all the health issues, and now he’s done too.

The ability to get after the quarterback is essential in today’s pass-happy NFL, and the 49ers are now very thin on pass-rushers. Fellow defensive end Dee Ford is on injured reserve with a back issue, and San Francisco might have to make a move for a veteran if they want to have any hope of contending in 2020.

The NFC West was already tough last year when the 49ers won it, and now it’s a whole lot tougher. The Seahawks look like one of the best teams in the league at 4-0, the Rams are much improved at 3-1, and the Cardinals appear to have made major strides as well.

If the season ended today, the 49ers would finish in last place on a tiebreaker due to their loss to Arizona in Week 1. Of their 12 remaining games, five are against those three teams. On top of that, they’ve still got games against the Patriots, Packers, Saints, and Bills. It’s an absolute gauntlet the last 12 weeks of the season. This first month was by far the easiest stretch of their schedule and they still only managed to go 2-2.

I don’t see another trip to the Super Bowl in their future. The defense has been destroyed by injuries, and Robert Saleh’s unit clearly isn’t going to be anywhere near as good as they were last year. They’ve got arguably the toughest remaining schedule in the entire league, and they just don’t have the same juice that they did in 2019.

The Eagles have also been decimated by injuries and just plain aren’t very good, and the 49ers still couldn’t beat them at home as favorites of more than a touchdown. Garoppolo will probably return for Week 5, but I don’t think it’s going to be enough to right the ship. The problems are much bigger than that.

San Francisco might be in trouble, but will either the Jets or Giants even win a game this year? Our expert assesses the dire situation in New York.