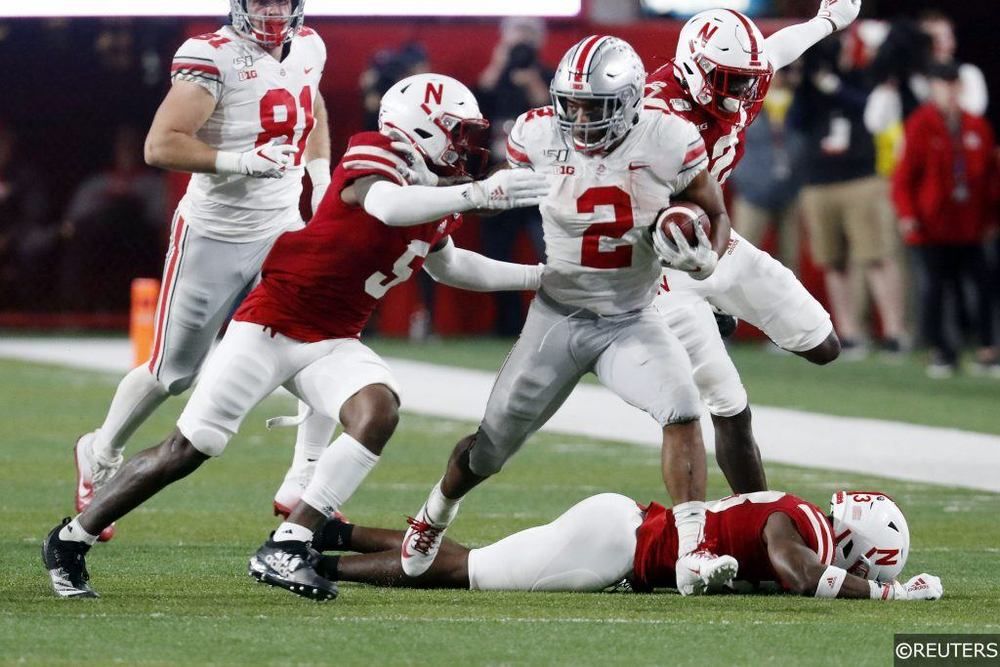 With just two weeks remaining until Championship Weekend in College Football, things are heating up as division deciding games are on the horizon for many of the top contenders for the College Football Playoffs. A huge Big Ten East Clash could very well be the most interesting game of Week 13 in College Football. Where does Alabama turn without Tua? Will Joe Burrow run away with the Heisman? A lot of questions surround the top teams in college football. Let’s dive into the top NCAA Football Storylines for this week.

Penn State can create chaos atop the Big Ten

Penn State finds itself with a great opportunity as they visit Columbus for a Big Ten East showdown with the unbeaten Buckeyes. Ohio State has rolled its way to 10-0 and will look for two quality wins in the final two weeks. The Nittany Lions will be looking to prove themseleves and earn their second win over the Buckeyes in the last four meetings. Ohio State has missed a beat offensively, while Penn State’s defense has kind of fallen apart the past two weeks. If the Nittany Lions can pull off the upset in the Horshoe, then the College Football Playoff field will be turned upside down, as the Buckeyes still have a trip to Ann Arbor next week. No matter the outcome this game should be one of the best of week 13.

Tua underwent successful hip surgery, earlier this week, but Alabama fans won’t most likely see him in uniform again. He isn’t likely to even be able to start throwing the ball until the spring if his rehab stays on schedule. The Crimson Tide are still very much in the playoff hunt, but they will have to look to for the man up at the quarterback position. Their match-up against West Carolina looks to be at the right time, as they prepare for the Iron Bowl next week. Mac Jones will be the guy behind center, but the way Najee Harris has been able to run the ball, Alabama might not be in as much trouble.

Can the Wolverines finish the job?

The Wolverines were already behind the eight ball, with two losses in the first half of their schedule. Yet they have made a late push with a huge blowout of rival Michigan State, as their offense has looked capable of taking the team to a level it hasn’t seen in years. The questions around whether or not Harbaugh is the long term guy can be silenced if Michigan can not only survive a road contest against a strong Indiana team, and then somehow end their struggles against Ohio State. Indiana has been sneaky, and they gave Penn State all they could handle, in week 12. Can the Wolverines avoid a let down in week 13?

The PAC-12 might be on the outside looking in, for the playoffs, but they do have Oregon and Utah both sitting with one loss. Both teams are coming off strong wins in week 12, and look bound for a PAC-12 Championship Game match-up. Both the Ducks and Utes visit the state of Arizona this week, as Oregon visits Tempe to face Herm Edwards’ Sun Devils, and Utah visits Tucson to face the Arizona Wildcats. If both can avoid any letdowns then, the winner of the PAC-12 should be in a position to make noise for a playoff birth.

How about the AAC West?

How about the AAC, this season, this conference has been pretty exciting to watch. The AAC West to be more specific as there are three teams tied atop that division. Navy, #18 Memphis and #25 SMU all sit at 5-1 in the American. The division could start to be decided this week as Navy and SMU clash in Annapolis. Memphis gets South Florida in week 13 and finishes with a tough home game against #19 Cincinnati. It’s time to buckle up in the American, as whichever team survives the final two weeks will most likely get the Bearcats in the AAC Championship Game.