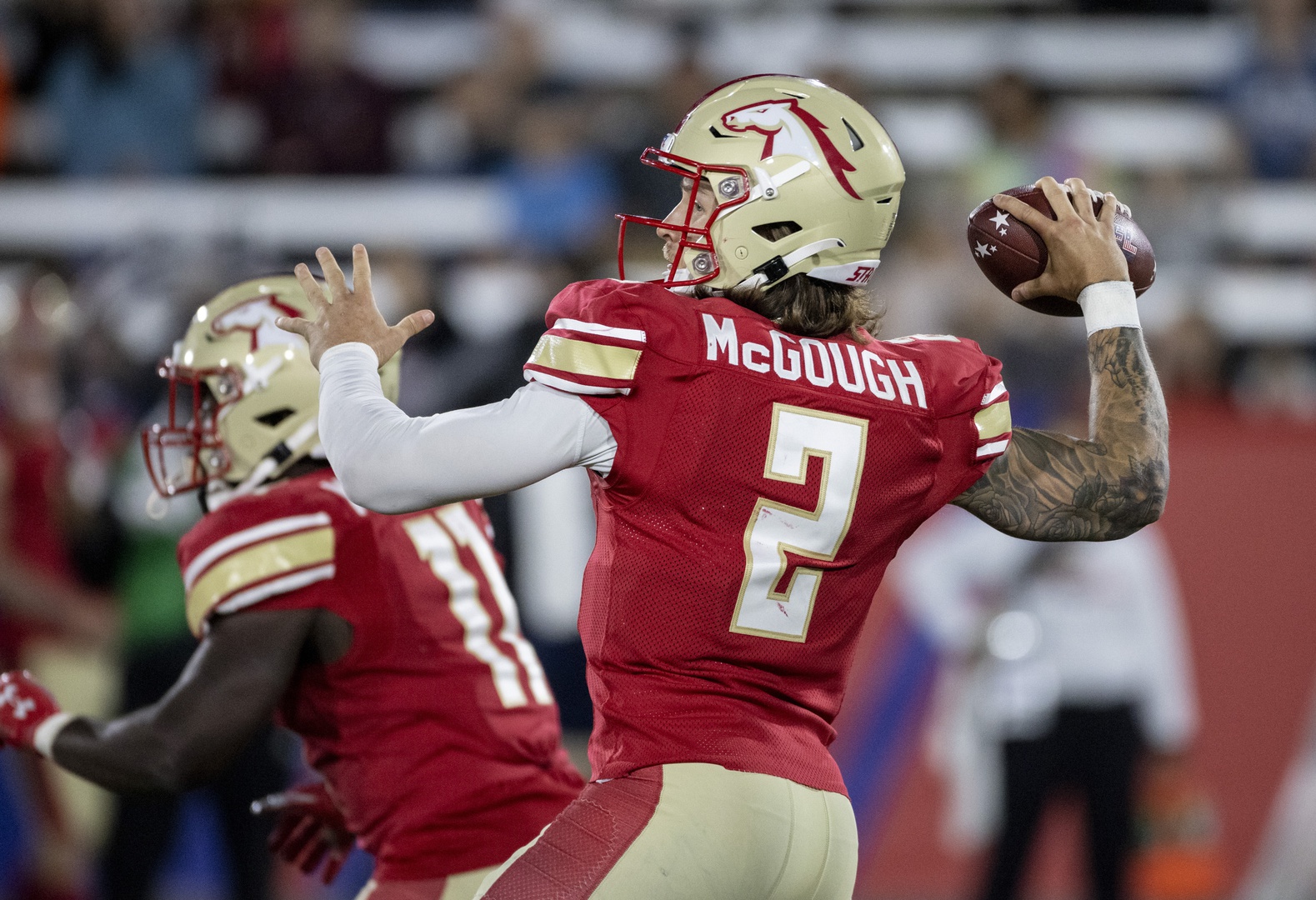 We are fully in the second half of the season in the United States Football League and we have definitely seen improvements in offenses down at Protective Stadium in Birmingham, Alabama. More points have been scored, there are established trends with teams, and games have been more enjoyable overall. We hit 3 of our 4 bets last week on the USFL, and we have 4 more best bets for this weekend’s action. Let’s make your holiday weekend even more enjoyable as we enjoy some barbecue,  football and betting wins!

Here are our best bets for Week 7 of the USFL season.

How to watch the USFL in Week 7

The USFL regular season will continue on Saturday, May 28 and run through mid-June before the playoffs begin. The opening matchup this weekend will see the Tampa Bay Bandits take on the New Jersey Generals, with kickoff set for 12:00 pm ET on Saturday.

They almost blew a game to one of the worst teams in the league in the Gamblers last week, but the New Jersey Generals are certainly among the elite in the USFL with their 5-1 record. They are among the best scoring offenses in the league, and their run defense is off the charts good, allowing just 74 yards per game on the ground. I keep expecting the interchanging quarterbacks to come back and bite them, but head coach Mike Riley has been pushing all the right buttons this season. In Week 5 it was De’Andre Johnson who led the team and last week Luis Perez played most of the way and scored the game-winning touchdown on a quarterback sneak as time was expiring.

Tampa Bay has been the most unpredictable team in the league, and just when you think they have it figured out they lay a dud. Jordan Ta’amu had a solid game last week, but I just think that New Jersey does enough to keep themselves in the hunt for a division title.

The play in the USFL has improved greatly, and the scoring has increased with it. However, it isn’t really because of these two teams. The Panthers have scored just 37 points in the last couple of weeks, while the Breakers have only been slightly better with 43. Both of these teams have solid defenses, as Michigan allows just under 19 points per game and New Orleans just under 17. Both quarterbacks have been shaky at times as well. Shea Patterson of Michigan has played better lately, but he still has a long way to go. Kyle Sloter is one of the better quarterbacks in the league, but he has been dealing with a lingering groin injury that he has been playing through.

This isn’t a really high point total, especially given what we have seen across the league the past couple of weeks, but I just don’t trust these teams to put up enough offense to quite get to this number.

This is by far the biggest point spread we have seen in the league this season, and honestly it is for good reason. Even though Vad Lee has awoken the stagnant Maulers offense to a degree, Pittsburgh is still easily the worst team in the league for me. On the flip side, Birmingham remains the only undefeated team with a tremendous offense and a defense that has been playing better from week-to-week. Birmingham is averaging 27 points per game, while Pittsburgh is coming in at just under 13. The Maulers don’t really do anything well on offense as they put up only 258 total yards a game. And while Pittsburgh scores less than 13 per game, they are allowing 23 points per contest through six weeks.

J’Mar Smith is a dual threat with his arm and legs at quarterback, and newly signed Bo Scarborough looks like he is going to be an absolute locomotive running the ball. This one could be over by halftime and the Stallions could win it by 20 points.

They have a combined 4-8 record, but I think these two teams are fun to watch. They put up a good number of points per game with Philadelphia at 23.5 and Houston scoring 22 per contest, but their defenses are also equally inept with Houston surrendering just under 24 per game and the Stars allowing 25.5 each time out. The Stars have been able to tread water without their starting quarterback, but second-stringer Case Cookus has actually looked pretty decent in relief. Philadelphia even put 35 points on the board last week. The Gamblers are really bad against the pass too, allowing 237 yards per game through the air. Houston’s Clayton Thorson threw 3 touchdowns last week in a losing effort, showing the potential for this offense.

This game is going to be played a lot in the air, as neither team runs the ball overly well. Mark Thompson is the best back in this game, but Houston still only racks up 101.7 yards on the ground. This is one of my favorite bets on the board this week and this one could hit 50 given the less than stellar defenses on the field.