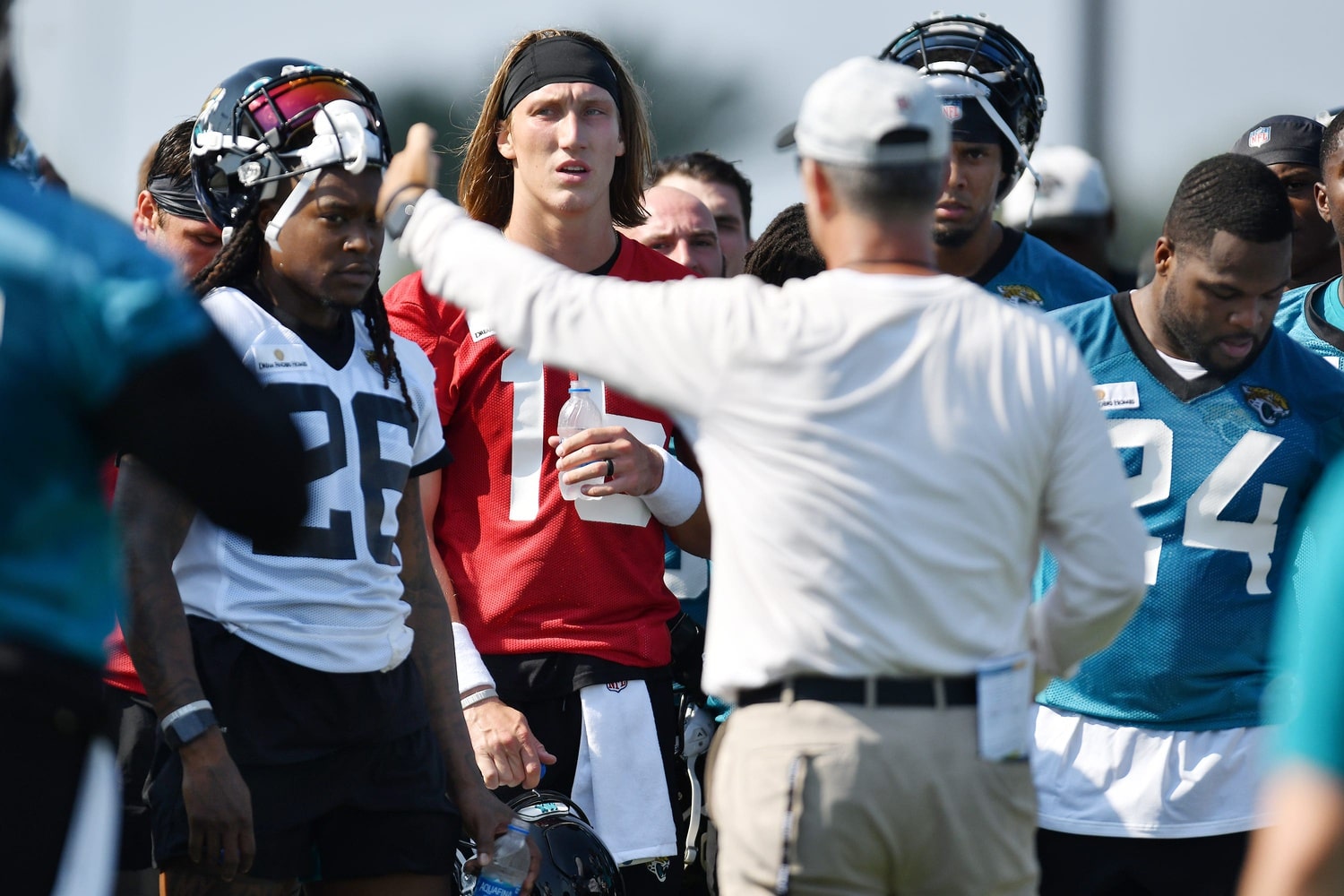 Lawrence’s early struggles are down to Meyer

There is a massive difference between being a great college quarterback and a franchise QB in the NFL. Urban Meyer knows the style of QB he needs to run a successful offense at the college level. He also knows how to bring in five-star recruits at every other position to surround his system-style signal-caller. But in my opinion, Meyer is not a developer of professional franchise quarterbacks.

Meyer gets credit for coaching former #1 overall pick Alex Smith while at Utah, but if you study Smith’s career in the NFL it took him almost five seasons to really start to become a good starting QB, and that was under Jim Harbaugh. His other high-profile QBs were Tim Tebow and Dwayne Haskins. Denver did the best they could with Tebow but realized quickly he was not an NFL starter, and Haskins is not even close in terms of accuracy or decision-making, and his professional career has been a disaster so far. What quarterback has Meyer ever seriously prepared for life in the NFL?

Jacksonville owner Shad Khan needed to put more thought into who is qualified to develop Trevor Lawrence, not who can make him money selling season tickets by giving fans false hopes that the Jaguars could resemble the Florida Gators. I saw the demeaning signing of Tim Tebow as a tight end as more of a Meyer-led PR stunt than putting together the best roster.

It is not all off-track for the Jags. GM Trent Baalke put together a talented team in San Francisco from 2011-16. The offensive line has struggled but has experience, and the defense has plenty of talent. But the critical question is, who is developing Trevor Lawrence to unlock his superstar potential? It certainly doesn’t seem to be Urban Meyer. This early period is critical for rookie QBs to learn and make gradual progress as they adjust to the pro game. But with each subsequent week of sub-par play, the #1 overall pick’s confidence takes a hit and his potential growth is stunted.

Head coach in the sauna: Zimmer’s in the frame

When I worked for the Bills, owner Terry Pegula hired Rex Ryan in 2015. During his introductory press conference, Ryan mentioned that the Jim Schwartz-led defense that ranked 4th in points per game and led the league in sacks in 2014 was not good enough and he will make the defense rank first. The Ryan-led defense in 2015 ranked 15th in points per game and 31st in sacks per game. Ryan was fired before the end of the 2016 season.

Owners always want to know who the problem is. Is it the players, coaches, or talent evaluators? Spielman has been the GM since 2012 and is unlikely to be on the hot seat. Like most GMs, he has had his share of hits and misses, but owner Zygi Wilf is going to want answers on why the defense is not improving. The Vikings are so close to being 2-0 (which is a point Zimmer would likely make if asked those sorts of pressing questions), but that is the fine line. Zimmer may become the odd man out unless they find a way to show value in their off-season spending on defense.

Make sure you read The Dog House — our three best NFL underdog bets for Week 3!

Week 2 quarterback film review: Carr’s on the road to greatness

After watching film of every Week 1 game, I can see which quarterbacks put in great performances and which ones put up what I like to call “fake stats”, where their numbers in the box score are misleading. Let’s dive in.

Make sure you check out our best Week 3 teaser picks and parlay!

Atlanta is ranked 30th on third-down offense while the Giants rank 14th on third-down defense. Matt Ryan is very limited at this point, ranking 28th in yards per attempt, whereas Daniel Jones is coming off a tremendous game against Washington last week. A little extra rest for the Giants should have them ready to get their first win of the season.

Both defenses are playing well in terms of yards per play, but the Patriots rank 5th on defense in sack percentage which is a big advantage when going against the turnover-prone Jameis Winston, who was skittish last week against Carolina’s heavy pressure.

Make sure you read our picks on the side and total EVERY Week 3 NFL game!