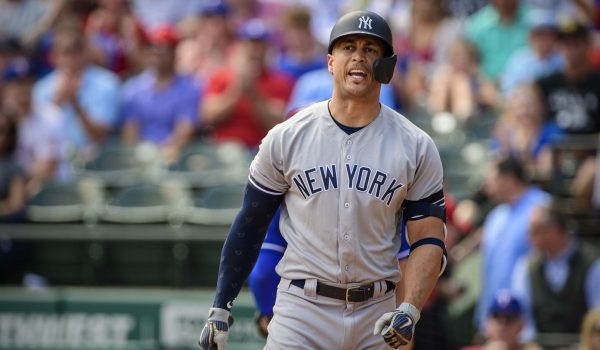 We understand if most of your attention is on March Madness right now, but the start of the 2021 MLB season is just a day away. The offseason went by in a flash, and we’re about to start a 162-game march. Last year’s season was only 60 games due to the pandemic, and it’ll be very interesting to see how that impacts this season.

MLB will also reportedly tinker with the balls in 2021, injecting yet another wild card variable. We’ve got a ton of great MLB content coming, so make sure to check out our ‘MLB news‘ tab for everything you might’ve missed. When the games start, head on over to our ‘MLB picks‘ tab for free picks on the side and the total of every game. But right now we’re talking futures props, specifically season leader props.

Let’s not waste any more time, we’re diving into some best bets:

Stanton is coming off two injury plagued years, so everybody seems to have forgotten about him. Let everyone else sleep, and scoop up the value while you can. The injuries the past two seasons were flukes, and he’s still one of the best power hitters in the league. Over his last two healthy seasons, he’s mashed a whopping 97 home runs. He led the league with 59 in 2017, so I think getting 20/1 here is a steal. Stanton dominated in the playoffs last season, homering in five straight games at one point, so it’s not like he’s lost a step. He’s also looked great at Spring Training this month.

Bieber led the league in strikeouts last season, and it wasn’t particularly close. He finished with 122, 18 more than second place. When you consider the fact that nobody started more than 12 or 13 games last year, 18 is a heck of a lot more than it sounds. As such, I think he has a lot of value as the pitcher with only the third-lowest odds. The reigning Cy Young winner faced a really tough Dodgers lineup in his last Spring Training tune-up, and he struck out nine batters in 5 and 2/3 innings.

Bieber is also still only 25, so you don’t have to worry about Cleveland limiting his innings or not letting him go deep in games. It also doesn’t hurt that he’ll get to face a lot of strikeout-heavy teams. Each of the other four squads in the AL Central, the Royals, Tigers, Twins, and White Sox, finished in the top half of the league in strikeouts last year.

#OurTribe Shane Bieber might win every game this season..😲

I’m getting chalky with this one, but barring a serious injury I don’t see how Mondesi doesn’t lead the league in stolen bases. He had 24 last season, a full 50 percent more than Jonathan Villar who came in second with 16. Not many teams believe in stealing bases with regularity these days, but the Royals and their small ball approach are one of them. Mondesi is the fastest player in the league, and he’s going to be taking off at a higher rate than anybody else. There’s a reason he’s such a heavy favorite here, don’t overthink it.

Sad baseball hasn’t started yet? You’re in luck, because Pickswise is the home of March Madness Predictions. Check out all of our March Madness Picks, including daily March Madness Parlays throughout the NCAA Men’s Basketball Tournament.