Back to the Futures: Bills leading the Super Bowl charge as oddsmakers react to NFL Week 5 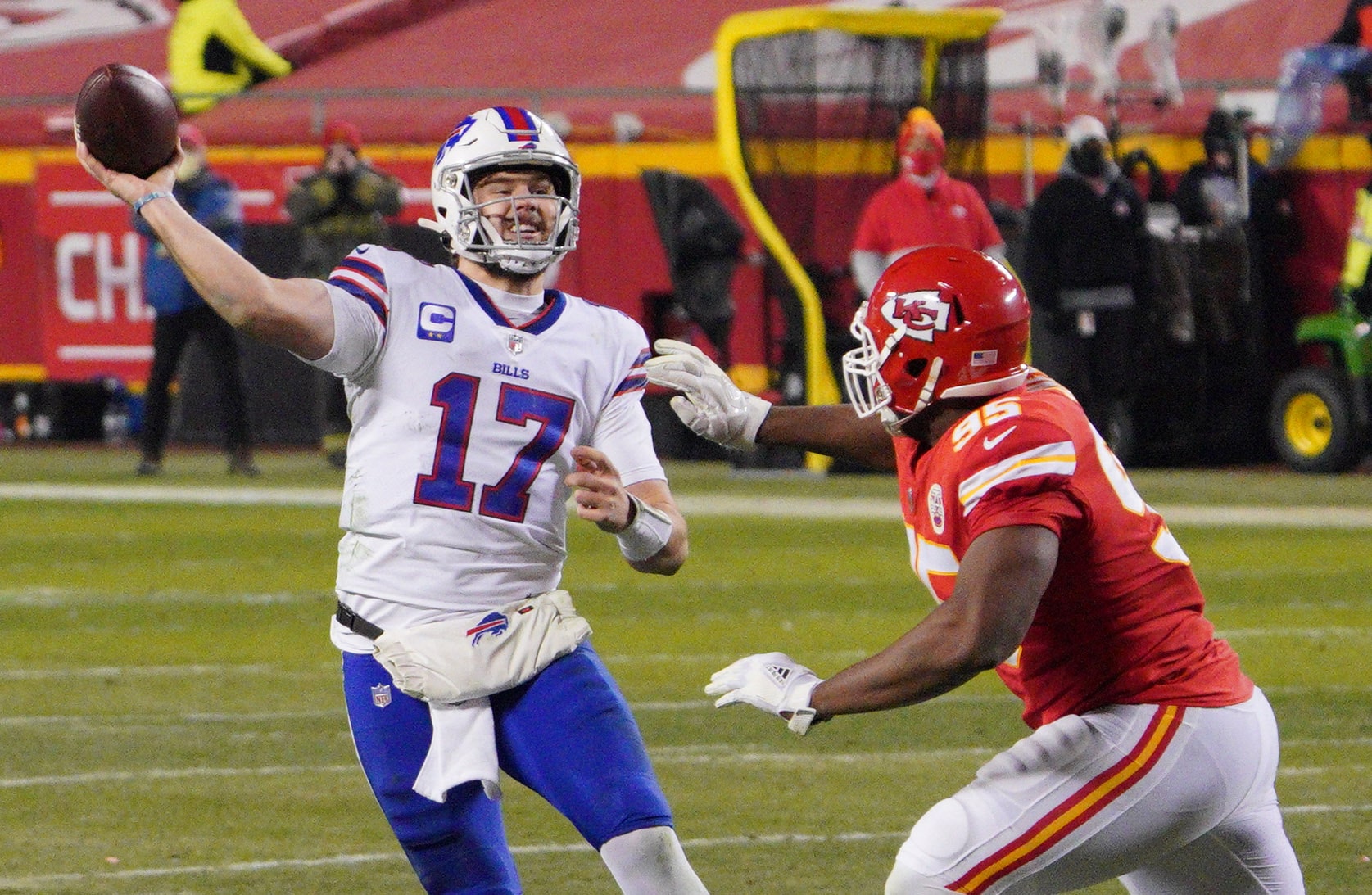 A changing of the guard took place in the NFL markets Sunday night at Arrowhead as the Bills flew into the catbird seat and will now assume the role of Super Bowl favorites heading into Week 6.

“We moved the Bills from +800 to +500 to win the Super Bowl, and from +350 to +250 to win the AFC,” said WynnBET Trader Sawyer Johnson. “Buffalo is currently -1800 to win the AFC East after being at -500. Josh Allen is third on our MVP list at +500 behind Herbert and Murray.” Considering their soft schedule over the next few weeks (at Titans, vs. Dolphins, at Jaguars, at Jets), I would not be surprised to see this number shorten as the season moves on.

Also, for the first time this season, I’ve noticed a clear separation in the market between teams the sportsbooks believe can win the Super Bowl, and teams they are willing to gamble on. At the Westgate SuperBook, there is a sizable gap between the top 10 teams and the rest of the market, and a clear hierarchy of contenders is being established.

Beneath the third tier, the next highest team is the Titans at +3000 followed by the Saints at +4000. The remaining 20 teams are +6000 or longer to win the Super Bowl. Let’s dive deeper into some of the contenders and find some angles to attack the market.

The Cardinals have pushed their way into the contender conversation after an electric 5-0 start but if you haven’t jumped on the bandwagon by now it’s probably best to wait, as they are road underdogs this weekend in Cleveland. “I believe that line is short against the Browns,” said Johnson. “When you think about an undefeated team, you think of a very dominant team. But, their wins against the Vikings, Jaguars and 49ers weren’t impressive at all. They deserve to be an underdog on the road against one of the most complete teams in the NFL.”

Sunday’s wild win coupled with the Chiefs’ loss later that night sent a chain reaction through the market, installing the Chargers as the favorite to win the division. The schedule stiffens a bit over the next couple of weeks with road games against the Ravens and Eagles sandwiched around a home date against the Patriots. “The Chargers need to just keep winning,” said Johnson. “Currently, (Justin) Herbert is a co-favorite with Kyler Murray at +400 (to win MVP).” Considering Herbert came from way down on the odds board it’s hard to see his MVP number getting much shorter barring a significant injury to either Josh Allen or Kyler Murray. I would be willing to open a small position on the Chargers to win the division as I have a genuine concern for the Chiefs long-term considering their defensive woes.

Read our reaction to Jon Gruden’s departure from the Raiders

It’s time we started taking the Cowboys very seriously. Dallas is the only team in the NFL with an unblemished ATS record and they should be favored in each of their next four games. They are also in the running for the top seed in the NFC if they can continue to feast on the weak NFC East. The Dak Prescott awards market is also heating up. “At this point, the Comeback Player of the Year is Prescott’s to lose. He is a very real MVP candidate. He went from +1200 to +600 after his most recent performance against the Giants,” said Johnson. I would be willing to shop around and open a small position on the Cowboys to win the Super Bowl or NFC.

Ohio State has inserted itself back into the national conversation, thanks in large part to their own solid play, but also because of setbacks by some of the other teams in front of them, most notably Penn State and Alabama. “CJ Stroud also looks to have gained his footing with 10 passing touchdowns in his last two games,” said WynnBET Senior Trader Motoi Pearson. “I dropped him from +1500 to +550 to win the Heisman, which is a very significant move.” The Buckeyes are idle this week and have a cupcake matchup at Indiana on October 23rd before a pivotal home date against the Nittany Lions the following week. If you can find Stroud at +1000 or longer it’s probably worth opening a small position.

Alabama Crimson Tide: +120 to +275 to win the College Football Playoff at WynnBET

Despite Alabama’s loss to Texas A&M, the Crimson Tide are still firmly entrenched in the national title race, but Georgia has leapfrogged into the top spot. “We see this as mostly a two-team race,” said Pearson. “I’d like to see Ohio State or Michigan make a run to the playoff, and they are two teams we are keeping at a low number for now.” Alabama has a relatively easy road the rest of the way and I can only see their number shortening before a potential SEC Title matchup against Georgia.

Check out Jared’s best early bets for NFL Week 6 and all the opening lines in his Early Birds column!