The first jewel of horse racing’s Triple Crown will take place on Saturday, but they are not running for the roses at Churchill Downs. No, the coronavirus pandemic has rearranged the schedule such that the Belmont Stakes—normally held last—is going first. Thus there is no Triple Crown at stake and there also won’t be any fans in attendance. Still, this is one of the three biggest horse races of the year in the United States. There will be plenty of eyes glued to television screens…and to betting markets.

Let’s take a look at the best bets for Saturday’s festivities in New York. And be sure to check out our free horse racing expert picks for other Belmont races.

Tiz the Law was purchased for just $110,00—a relatively modest sum in the world of horse racing—and to say that looks like a good investment at this point would be a gross understatement. Speaking of good investments, Tiz the Law is the favorite for a reason at the Belmont Stakes and -130 is not bad value. He has won both of his starts in 2020 and five of his past six overall. The only blemish came in Kentucky last fall, when a traffic-infested route basically the entire way led to a third-place showing. There are only 10 entries for this Belmont Stakes, so traffic should not be a problem. Jockey Manny Franco will also make sure that’s the case. Trainer Barclay Tagg held his horse out of the 2019 Breeders’ Cup, instead placing early focus on the three 2020 Triple Crown races. A dominant performance by Tiz the Law in leg one of the trio would not come as a surprise.

In six career appearances, Sole Volante has never finished off the podium. That’s right; he is a top-three machine. And there is no reason to think anything will change this weekend at Belmont Park. Four of his six impressive results are victories, including his most recent effort on June 10. This is by no means the best Belmont field ever, mainly because trainer Bob Baffert has seen three of his projected entries bow out due to injuries. All three of Baffert’s horses were thought to be serious contenders. The door may not be entirely open because of Tiz the Law, but it’s certainly open for another finish in the money.

You have to like this head-to-head matchup, and Tap It To Win is the way to go. He has won his two most recent appearances and is ridden by jockey John Velazquez, a two-time winner of both the Belmont Stakes and the Kentucky Derby. Among Tap It To Win’s recent ancestors are A.P. Indy, Unbridled, Medaglia d’Oro, and Tapit. Dr. Post has won his two previous 2020 starts, but those came at the expense of unspectacular competition. He has little racing experience and may not be ready for the big stage against more proven horses. 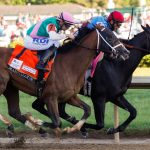