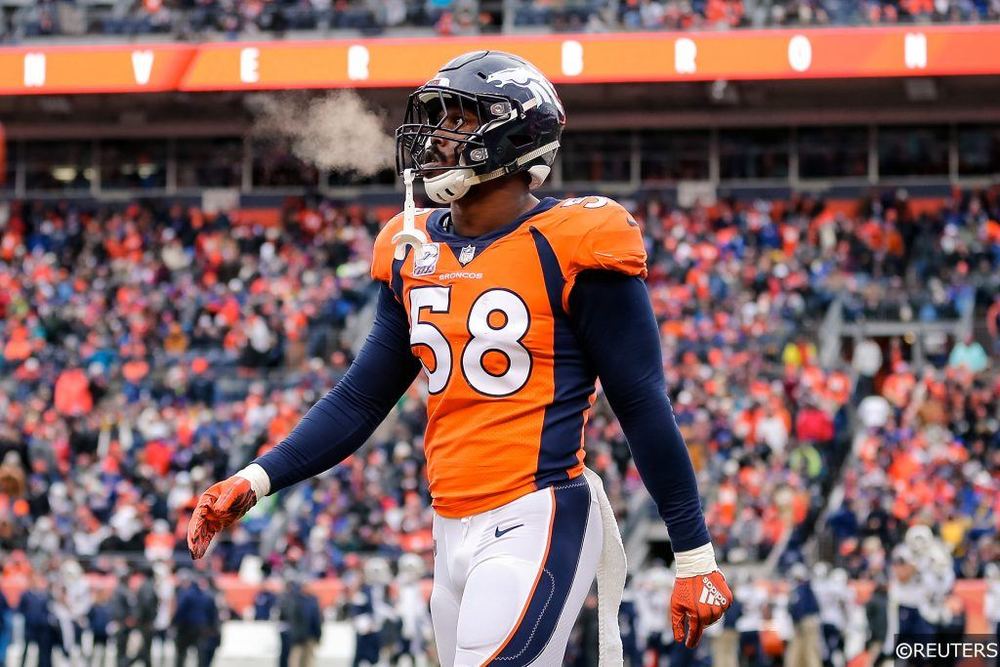 With pretty much every sports league shut down due to the ongoing coronavirus pandemic, futures bets are the best way to get down money on some action. NFL win totals are out for the 2020 season, and yesterday we took you through a couple of the best bets in the NFC. Now it’s time to break down the AFC, and there are a couple of great opportunities for value.

Want to make a wager on some NFL futures? Take a look at the great promotions from all the legal sportsbooks on our promo codes page!

I’m not too optimistic about the Broncos’ chances in 2020. A lot of people understandably got excited about Drew Lock down the stretch, but he didn’t actually show all that much. The coaching staff made everything as easy as possible for him, and outside of one great game against the Texans, he was pretty mediocre. In fact in three of his five starts, he averaged 5.8 yards per attempt or fewer. There’s just no reason to be sure that he’s a franchise quarterback at this point, and I haven’t been impressed with the offseason Denver has had. Outside of signing guard Graham Glasgow the only big move they’ve made was adding running back Melvin Gordon, who doesn’t add much value.

They are also in a very tough division where the defending Super Bowl champion Kansas City Chiefs should dominate again. The Los Angeles Chargers have arguably the most talented defense in the league on paper, and the Raiders have made a ton of moves since last year to get better. I simply don’t see Denver playing .500 ball or better. They lost cornerback Chris Harris Jr. and safety Will Parks in free agency, leaving big holes in their secondary. Outside of Courtland Sutton, they really don’t have much at receiver either.

The other win total in the AFC that I really like is also in this division, and it’s the over on the Chargers. Los Angeles had an extremely talented roster last year, but they underwhelmed as they dealt with a ton of injuries and bad luck. People seem to forget that just the year before the Chargers were one of the best teams in the league and won 12 games. Last year they somehow managed to lose nine contests by only one possession, a trend that tends to reverse itself the following year. General manager Tom Telesco has been very aggressive this offseason, picking up solid veterans left and right.

They added guard Trai Turner, who has made five straight Pro Bowls, and tackle Bryan Bulaga to give Los Angeles the best offensive line they’ve had in many years. After adding defensive tackle Linval Joseph to go in between Joey Bosa and Melvin Ingram, they now have one of the best defensive lines in the NFL. They already had one of the most talented secondaries in the league, and now they’ve added another All-Pro in Harris. This team has so much talent that it doesn’t really matter who they trot out at quarterback, but right now it looks like it’s going to be Tyrod Taylor. The last time Taylor was a starter for a full season he ended up leading a much worse Bills team to the playoffs. Don’t sleep on Los Angeles.