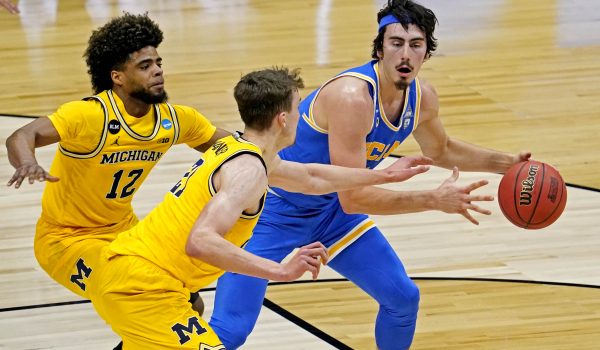 The NCAA Tournament is winding down, and the Final Four is upon us. We’ve still got a lot of great content coming, so be sure to check out our March Madness hub to stay on top of everything that goes on. Also, be sure to check out our picks on the side and total for every single game in the tournament. But right now, we’re talking player props. The college prop markets can often be inefficient, and there’s value to be had as a result. Let’s dive into my three favorite prop plays for this weekend, where we’re counting on Jaime Jaquez Jr.:

This line feels pretty high considering Jarreau only is averaging 10.8 points for the season. Houston’s offense has played things particularly slow in the tournament, not scoring more than 67 points in any of their last three games. Jarreau has failed to score more than 11 points in four of his last five games, and that’s not even counting the Cleveland State game where he got hurt early.

Speaking of that injury, Jarreau’s hip is still clearly bothering him and he’s appeared hobbled numerous times. Baylor’s defense is a lot better than people give it credit for, and they just recently held Wisconsin to 63 points and Villanova to 51. It wouldn’t surprise me at all if Jarreau scores single digits here as Quentin Grimes will be taking most of the shots.

Be sure to check out our full game preview for Houston Cougars vs. Baylor Bears.

One more for this Baylor game, I like the under on Teague as well. Sure he had a big game against Arkansas, but that game was played at a much faster pace than this one will be. Baylor scored 81 against Arkansas, and their team total here is only set at 70. In Baylor’s two previous games against Villanova and Wisconsin, Teague scored five and nine points respectively.

Houston has a much tougher and more physical defense than either of those two teams. Teague has a bit of a funky jump shot that needs more space to get off, which won’t serve him well against this lengthy Cougars defense that loves to fly around. I think Jared Butler and Davion Mitchell will be doing more of the scoring for the Bears here.

Looking at the UCLA vs. Gonzaga game now, and switching things up with an over. On the flip side of what I just talked about with Teague, this game is going to be played at a much faster pace than UCLA’s previous games. Gonzaga plays at the sixth-fastest pace in all of college hoops, so there are going to be a lot more possessions in this one than there were in UCLA’s slow as molasses game against Michigan.

Jaquez had a bad shooting night against the Wolverines, but non-Johnny Juzang players only scored 23 total points in that game. Needless to say, that’s not going to happen again. In their game before that against Alabama Jaquez had 17 points, and I think we’ll see something similar to that here. Gonzaga is going to focus all their attention on Juzang after his monster performance against Michigan, leaving things more open for Jaquez.