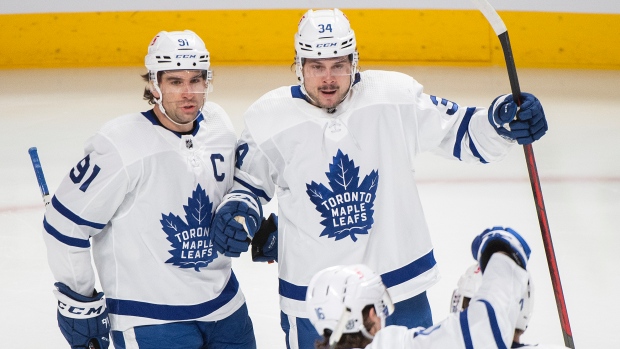 There are 10 games tonight in the NHL, we’re going to take a deeper dive into two of the matchups and choose two player props we think will provide good value and will have a great chance of hitting. Games are starting at 7:00 pm ET and the final game of the night starts at 10:30 pm ET.

Last years’ Rocket Richard winner has seemingly found his groove. Matthews has now scored in six straight games and has eight goals during that stretch. Despite Mitch Marner missing the last two games with injury, and being ruled out for this evening, Matthews has still looked dominant. In his last two games, he has a combined 11 shots on goal and has back to back powerplay goals. He still remains the number one shooting option on the powerplay and he’s been cashing in lately. After a slow October and a much better November, Matthews is looking to have the best month of his season by continuing his goal streak.

The Leafs have now lost two straight games for the first time since late October; Matthews will be playing his A game tonight to get the team back on track. Michael Bunting and Wayne Simmonds are expected to be Matthews linemates tonight. They’re not exactly known for their play making ability, but the physicality they bring will help open up the ice for Matthews to do his own thing. Expect a lot of touches and a lot of shots from Matthews tonight. With a 14.4 shooting percentage, take Matthews to get a goal tonight.

Palat has been getting first line minutes all season, and despite missing his two linemates Brayden Point and Nikita Kucherov, the top line has still been producing and Palat has two goals in his last three games. Tonight, the Lightning will be playing the Montreal Canadiens, one of the worst teams in the league this season. The Habs are currently allowing the third most goals per game while Tampa is scoring the eighth most goals per game. This is a complete mismatch in terms of numbers and the rematch between last years Stanley Cup matchup will likely favor the Lightning, again.

In five games last year against Montreal, Palat had four points in the Cup Finals. Expect him to regain some of that for tonight’s matchup. Steven Stamkos has been playing center for Palat this season and Stamkos has been having an unbelievable year with 27 points in 23 games. If some of his offense rubs off on Palat, Palat recording a point should be a shoo-in. With two goals in his last three games, and considering he’s playing against such a poor team, take Palat to record a point tonight.