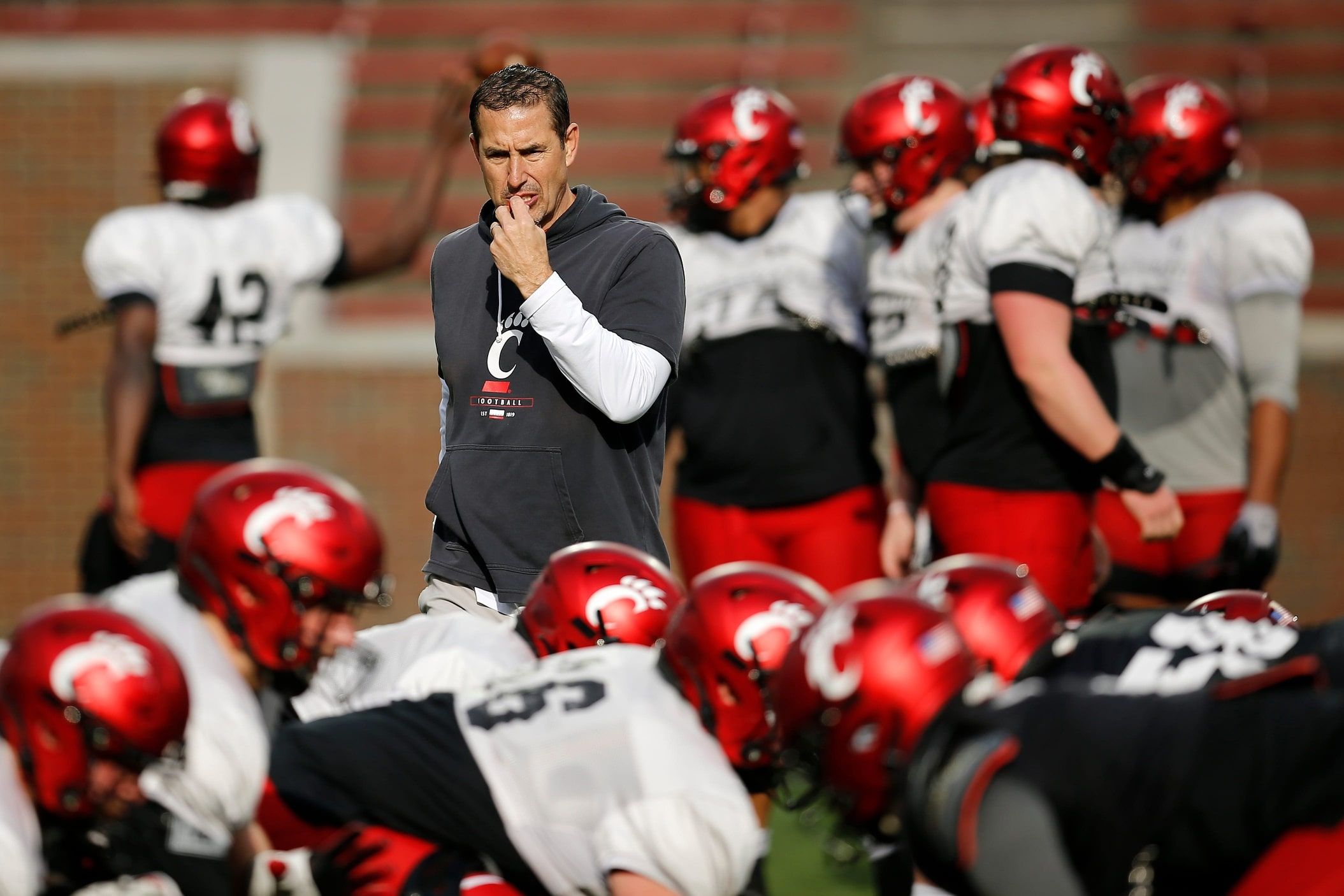 The Cincinnati Bearcats made history last season, as they were the first Group of 5 team to make the College Football Playoff. Replacing star players like quarterback Desmond Ridder and defensive back Sauce Gardner will be difficult, but the Bearcats are still considered by some to be the team to beat in the American Athletic Conference.

Will head coach Luke Fickell be able to lead the Bearcats to back-to-back College Football Playoff appearances? The 2022 season is right around the corner, so it is time to analyze the Cincinnati Bearcats.

Cincinnati is a longshot to win the national championship with odds listed at 200/1.

The Bearcats are the favorites to win the AAC at +190.

The oddsmakers do not envision Cincinnati making back-to-back playoff appearances, as the Bearcats are 20/1 to return to the College Football Playoff (no is -10000).

The Bearcats produced an unbelievable 2021 campaign. They went undefeated in the regular season, including a 24-13 win at Notre Dame in early October. Cincinnati followed up its undefeated regular season with an AAC conference title and a bid to the College Football Playoff, it eventually lost to Alabama 27-6. The score appears a bit lopsided, but the Bearcats were 1 of just 4 teams to hold the Crimson Tide under 30 points.

The Bearcats were very good offensively, scoring 36.5 points per game against FBS opponents (11th). Ridder (3,697 total yards and 37 touchdowns) ran the offense, but running back Jerome Ford was an integral piece as well (1539 total yards and 20 touchdowns). For as good as the Bearcats were offensively, they were even better defensively. They ranked 8th in points per game, allowing FBS opponents to score an average of just 17.6. Furthermore, the Bearcats allowed more than 21 points just three times (Indiana, South Florida and Alabama).

Fickell has a lot of talent to replace in Cincinnati and the Bearcats will likely regress because of it. Not only did Ridder, Ford and Gardner enter the NFL Draft, but leading wide receiver Alec Pierce and 5 other defensive starters did, as well. Luckily for Fickell and the Bearcats, all 5 offensive line starters will return to Cincinnati to protect a new quarterback. Currently, there is a battle to replace the two-time AAC Offensive Player of the Year, as Eastern Michigan transfer Ben Bryant and junior Evan Prater compete for the starting QB job. The running back position will be deep, as the Bearcats replace Ford with seniors Ryan Montgomery and Charles McClelland in addition to LSU transfer Corey Kiner. The Bearcat pass-catchers will also be an experienced bunch, as wide receivers Tyler Scott and Tre Tucker return along with tight ends Josh Whyle and Leonard Taylor. Maintaining the 11th-best scoring offense will be difficult, but as long as Cincinnati gets good production from the quarterback position the offense should be pretty good again this season.

However, defense is a worry; the Bearcats will replace 6 starters from one of the best defensive units last season. In addition to Gardner, Cincinnati lost Coby Brant and Bryan Cook from its secondary – which was the strength of the defense. The defensive line should be something to build around this year with Malik Vann, Jabari Taylor and Jowon Briggs returning, while the Pace brothers lead the linebacker group. With a lot of new faces in starting roles, expect some regression from the Cincinnati defense in 2022.

Asking Cincinnati to win 10 games with so much turnover is a lot, especially considering its schedule. The Bearcats have a very difficult matchup in Week 1, as they will travel to Arkansas for a true road game in the SEC with a new quarterback and a new defense. Assuming Cincinnati loses that game, it would win its next 10 in order for you to cash your bet on the over. A rematch with in-state rival Miami (OH) in Week 3 will be difficult for Cincinnati, but the most difficult part of the schedule is the back-to-back road games against SMU and UCF – both of whom are projected to finish near the top of the AAC. The Bearcats will then have to play Navy, which is going through a lot of turnover but is always tricky to play against, before hosting ECU – which returns their starting quarterback among multiple other pieces from last season’s 7-win team. Considering the schedule, it would not be a surprise to see the Bearcats lose 4 games to cash this under.