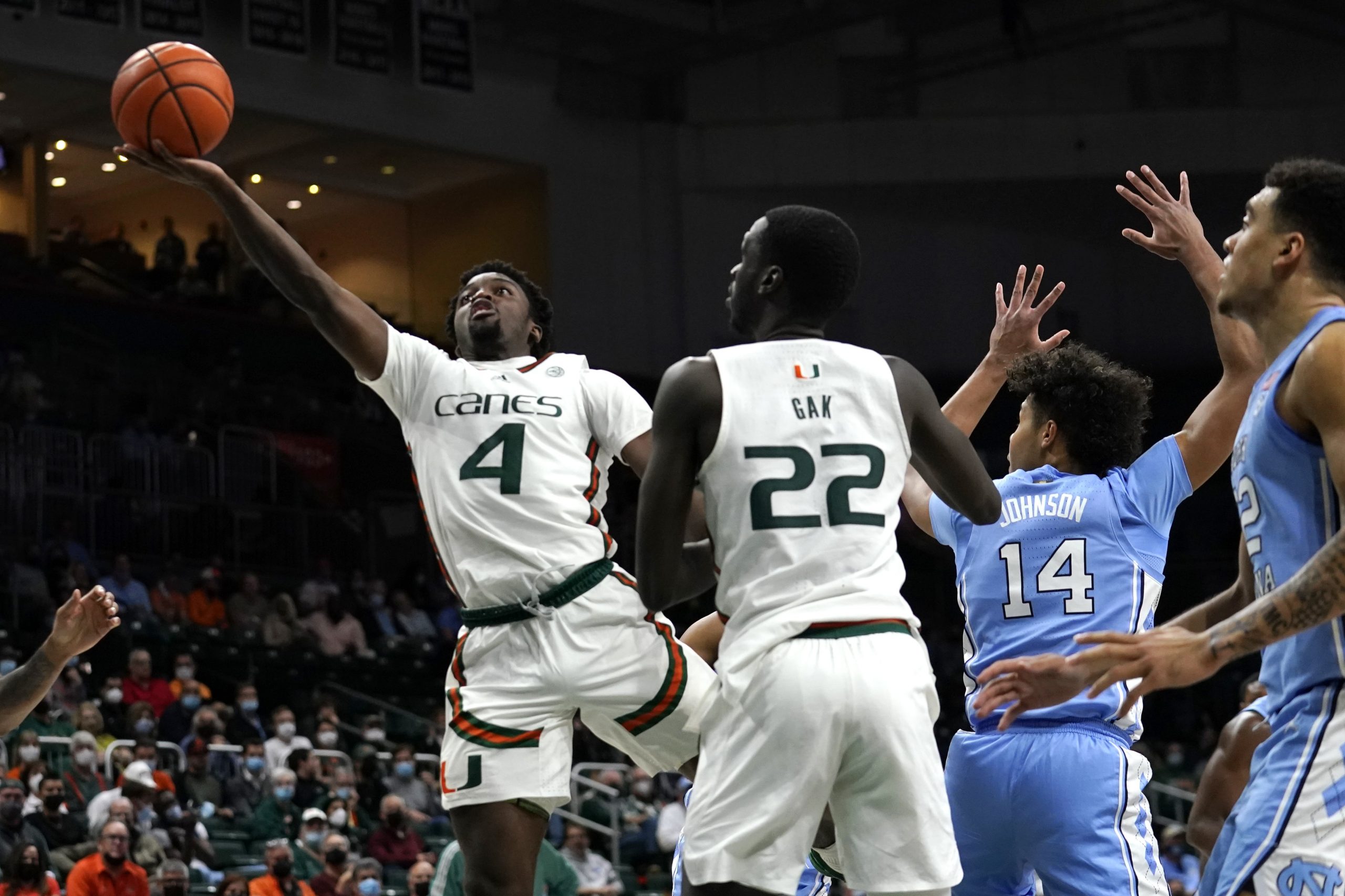 Saturdays in January are not just for the NFL. They are also for college basketball. We have another huge slate today, with 15 ranked teams taking the court. Among them are Auburn, Baylor, Duke, UCLA, and Kansas. Auburn has an especially intriguing contest on its hands against Kentucky.

Miami sits alone atop ACC rankings with a 6-1 conference record and is defeating conference opponents by an average margin of 7.3 ppg so far this season. The Hurricanes are led by versatile 6’5’’ guard Kameron McGusty, who is scoring 18.1 ppg — which ranks 5th in the ACC. The visiting Seminoles are coming off of an 86-73 home win over North Florida of the Atlantic Sun conference on Thursday night. Now 5-2 in the ACC, the Seminoles enter tonight’s game on a 5-game winning streak — which includes a 65-64 home win over the Hurricanes 2 weeks ago. Miami would be undefeated in conference play if not for that heartbreaker. The ‘Canes led basically the entire way before Florida State finally took the lead with 27 seconds left on a three-pointer by Malik Osborne. FSU ended up winning thanks to a pair of free-throws by RayQuan Evans with 0.8 seconds left on the clock. Miami should be able to turn the tide at home. Head coach Jim Larranaga’s club is 8-0 in its last eight home games and it has scored at least 80 points in seven of those eight victories.

Check out our Florida State vs Miami preview

The Horned Frogs were able to narrowly beat Oklahoma in overtime last Saturday but could not keep the winning streak going when they fell to Oklahoma State by 1 point on Wednesday night. Star guard Mike Miles did not play well in that loss, shooting a poor 2-for-15 from the field and finishing with just 8 points. He will need to play much better if TCU wants to pick up a huge conference win on the road. Iowa State has been the most improved team this season on the heels of a terrible 2-win 2020-21 campaign. The Cyclones are currently 14-4 on the season but have started conference play just 2-4. They were unable to season sweep Texas Tech on Tuesday night, losing 72-60 in Lubbock. Offense was difficult to come by in that game as Iowa State shot just 19.2 percent from beyond the arc and had just 2 guys score in double-figures. The Cyclones are the better all-around team by a wide margin, so a double-digit win is by no means out of the question.

Check out our TCU vs Iowa State preview

UCLA was victorious in the first H2H meeting (73-61) thanks to the strong guard play of Tyger Campbell and Johnny Juzang, who combined to score 36 points on 45% shooting from the field. More recently, the Bruins were victorious in a tough one against Utah on Thursday thanks in part to Juzang’s 28 points — which set a new season high for the junior guard. Colorado is looking to bounce back from a 61-58 loss to USC on Thursday, and the final score is very indicative of how ugly the game was. The Buffaloes shot 31% from the floor, as they were unable to find any breathing room inside the arc against the Trojans’ defense. In the previous meeting against the Bruins, the Buffaloes struggled to shoot the ball from deep — going 5-for-21 from three-point range. However, they did get serious production from Jabari Walker. The sophomore forward from Inglewood went for 22 points and 11 rebounds. Expect better shooting at home to give Walker more support, so Colorado can win this one.