College Football Week 13 Review: What we learned from the Oregon upset 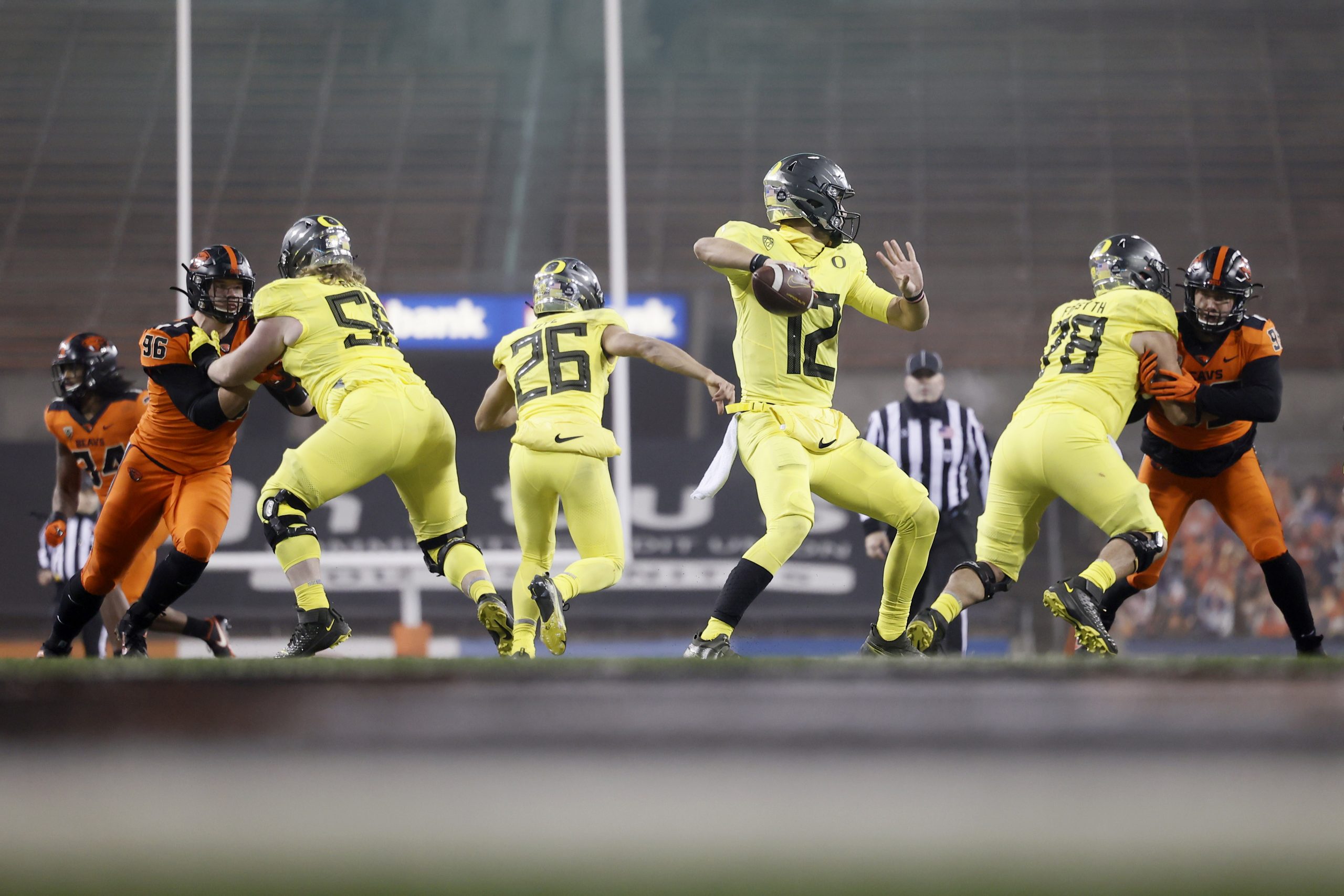 We all knew the 2020 college football season was going to be different due to the COVID-19 pandemic. Week 13 was no exception as we saw plenty of games postponed and a few cancelled altogether. The playoff picture is starting to take shape, but there is still plenty that could go right or wrong for any team making a push.

Today we’ll be breaking down one of the biggest takeaways from this past weekend’s action:

1. The Oregon loss all but eliminates the Pac-12 from the Playoffs

I was already skeptical of the Pac-12 as a whole this season considering the fact that they were the last conference to begin their season. Playing maybe six games was never going to be enough to get the attention of the Playoff committee, especially when as a whole the Pac-12 is weak anyway. Oregon was the only team that looked to be a real threat to make an appearance in the College Football Playoff. The Ducks were however only a top 15 team entering Week 13, so the Playoff Committee was not impressed with what they had done. The Ducks sealed their fate when they lost to rival Oregon State in the last 30 seconds of the game. This was really unacceptable and proved that Oregon was overrated.

Elsewhere in the Pac-12, USC is 3-0, but they have already had games cancelled. At best they can finish 6-0. The Trojans are only ranked 18th, so they virtually have no chance to move into the top four. Even if they win the Pac-12, they are not a team worthy of the playoffs. The games they have been winning have not been impressive either to further prove the Pac-12 should not be a playoff contender.

2. Trevor Lawrence deserves to be back in the Heisman conversation

It seems so long ago when Lawrence tested positive for COVID and was ruled out for the game against Boston College. He obviously was ruled out against Notre Dame (Clemson’s one loss), and then several more games were postponed. Some people might have thought that Lawrence would be a little rusty against Pittsburgh this past week. Maybe they thought the Panthers’ defense, which has been solid for stretches of the season, would have been able to contain Lawrence. Anyone who said that would have been dead wrong.

Lawrence looked like he had never missed a game, throwing for 403 yards and two touchdowns. He clearly is still a top quarterback in the country. He has thrown for 19 touchdowns and just two interceptions this season. I believe even with the games he missed, there is really no one else that should come close. The determining factor for me will be whether Lawrence can continue to perform at such an outrageous level down the stretch.

3. Northwestern is clearly not ready to compete for a Big Ten title

The Wildcats are having a monster season, there is no denying that. For a team who won three games last year, they have clearly turned things around, and did so with their defense. Though at the same time, college football has become much more offensive-minded, and clearly Northwestern does not have much to show for it. They are averaging just 24.8 points per game, which was their biggest problem in the loss to the Spartans. Not being able to score consistently is going to keep them from winning the biggest games this season.

Northwestern is looking like they will play Ohio State in the Big Ten championship, and it is shaping up to be a blowout. Even with the Wildcats’ defense looking solid, the fact they struggled against Michigan State proves they probably will not hold up against the Buckeyes. They have had a great season, but have pretty much hit their ceiling.