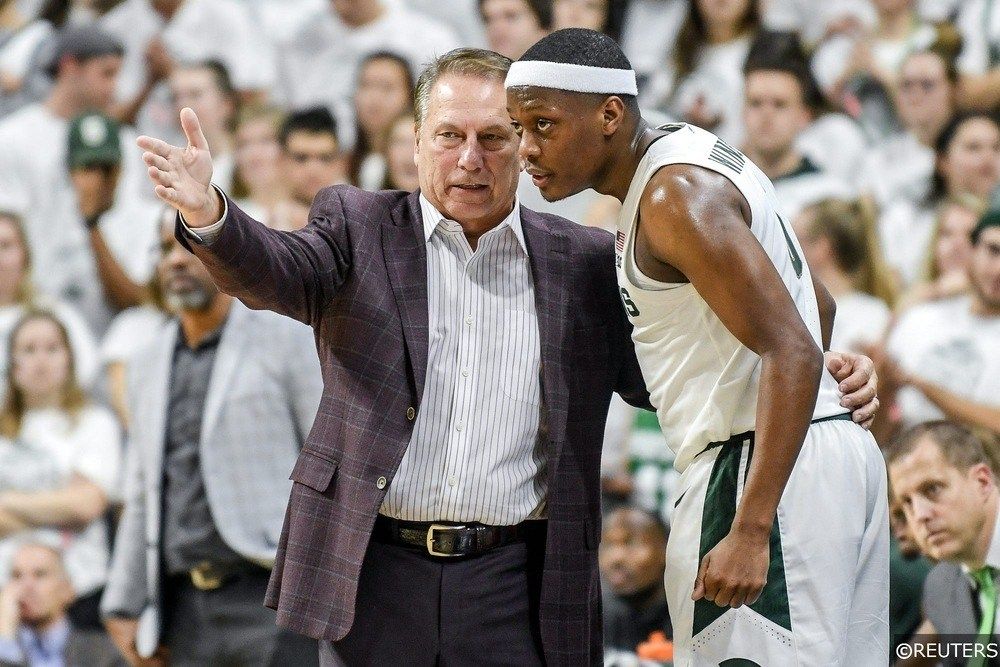 The College Basketball season looks to move right along, and they’re already has been quite a bit of movement from some of the top teams in the country. Following a tough second week, the Kentucky Wildcats have fallen out of their hold of the top spot, after getting upset on their own floor. The Michigan State Spartans look to regain the top spot in the  power rankings heading into the third week of the season. This week has already started with a bang, so let’s dive into our College Hoops Power Rankings.

The Spartans took care of business in a tough top-25 road duel with Seton Hall last week, which has pushed them back to the top in the power rankings. They followed that up with a nice 94-46 home victory over Charleston Southern to kick-off week 3. Next Game: Maui Invitational: vs. Virginia Tech (Mon. 11/25)

The Blue Devils started the season off with a bang, at Madison Square Garden in New York with a win over the Kansas Jayhawks in the Champions Classic. Next Games:  vs California (Thursday in New York), Georgetown / Texas (Friday in New York).

The Ducks have a strong group of players this season and have already picked up a very important win over a strong Memphis team. They get Houston next which might be the best game of the week.  Next Game: Houston (Fri. 11/22)

The Tar Heels have had to lean heavily on freshman guard Cole Anthony and he has been ready for everything. They will need more support from the rest of the roster and to be healthy. Next Game: Elon (Wed. 11/20).

The Jayhawks looked sloppy in their season opener, but have looked much better, even with changes to the line-up. Kansas might get tested again as East Tennesee State pays a visit on Tuesday night. Next Game: East Tennessee State (Tues. 11/19).

The Bulldogs were able to breeze through their first four games. That includes an impressive 30-point win at Texas A&M last week. Next Games: UT-Arlington ( Tues. 11/19), Bakersfield (Sat. 11/23).

The Buckeyes have looked impressive en route to a 4-0 start. Victories over Cincinnati and Villanova has Ohio State trending up. Add in an 86-51 victory over Stetson to kick-off this week. Next Game: Fort Wayne (Fri. 11/22).

The Wildcats were upset on their own floor by Evansville last week. They were tested once again by Utah Valley on Monday night. Lots of room for improvement. Next Games: Mount St. Mary’s (Fri. 11/22), Lamar (Sun. 11/24).

The Terps have had a pretty quiet start to the season and will hope to get through this week unbeaten, as they prepare for an underrated Orlando Invitational. Next Games: Fairfield ( Tues. 11/19), George Mason (Fri. 11/22).

The Red Raiders have made pretty easy work of Eastern Illinois, Bethune Cookman, and Houston Baptist. They have plenty of talent to make noise in March. Next Games: Tennessee State (Thurs. 11/21), Long Island (11/24).

The defending National Champions have made easy work of their recent opponents and gave up 42 points against Columbia in their last game which was the most points they have allowed to this point. Busy week ahead. Next Games: Vermont (Tues 11/19), UMass (Sat. 11/23 in Connecticut), Arizona State / St. John’s (Sun. 11/24 in Connecticut).

The freshman class for the Wildcats is making a lot of noise as Arizona has stormed their way to a 4-0 start. Next Games: South Dakota State (Thurs. 11/21), Long Beach State (Sun. 11/24).

Many questions surrounded this team as to how they would replace, Grant Williams, Admiral Scofield, and Jordan Bone. Those questions to this point have been answered. A win over a ranked Washinton team didn’t hurt either. Next Games: Alabama State ( Wed. 11/20).

The defense wasn’t going to be a problem for the Rams this season. The major concern was if this team could score the basketball, that doesn’t look to be a problem anymore as they were able to score 83 points in a win over LSU. Next Games: Florida Gulf Coast (Sat. 11/23).

The Pirates are coming off a down to the wire gritty match-up against the Michigan State Spartans. Seton Hall ultimately came up short, but Myles Powell has put his name in the conversation for best in College Basketball. The Pirates get an easier match-up before they head for the Bahamas for a first-round match-up with the Oregon Ducks to kick-off the Battle-4-Atlantis tournament. Next Games: Florida A&M (Sat. 11/23).

The Tigers had to replace the bulk of their perimeter players, but they haven’t missed a beat. Next Games: New Mexico (Mon. 11/25).

The Aggies haven’t had to face anyone of importance yet but will get a chance to prove themseleves with a match-up against LSU in Jamaica. Next Games: vs LSU (Fri. 11/22 in Jamaica).

The Musketeers looked set to have a quick start to the season with how favorable their non-conference schedule was supposed to be. Yet they have had to survive scares from Missouri and Missouri State. Next Games: Towson (Thurs. 11/21).