Last week there was a lot of diversity among players in fantasy football DraftKings and FanDuel. In week 12 there is likely to be less diversity as there are only a few games with high game totals. As a result, it’s a lot easier to focus on the three key positions for DFS in week 12 of the NFL season. We will look at the top values at the quarterback, running back and wide receiver positions for cash purposes and list are three must start players. Make sure to check out our DraftKings and FanDuel articles for lineups specific to those sites.

Do or Die for Jameis Winston

The leash on Jameis Winston has gotten considerably shorter. Almost everyone knows that if he has another bad game then he will likely be benched and his time in Tampa Bay will likely be over. However, I don’t expect Jameis Winston to have another poor outing. This is a game that we like to go over the 51 point total in our NFL Picks. Atlanta has looked great defensively over their previous two games limiting the Saints to 9 points and then limited the Panthers to 3 last week. Even with those two great outings, the Falcons defense has not performed well against the pass this season. Atlanta ranks 26th in passing yards allowed per game and 24th in passing yards allowed per attempt. This is a make or break game for Winston, and I look for him to perform under the pressure of the circumstances.

Nick Chubb Goes Off Against Dolphins

Nick Chubb continues to have an under the radar season. Chubb has done exceptionally well this season in fantasy football as he has the 3rd most rushing yards in the NFL with 1,011 for six touchdowns. This week the Cleveland Browns are favored by 10.5 points against the hapless Miami Dolphins. The Dolphins have been one of the worst teams against the run this season. Miami ranks 31st in rushing yards allowed per game and 25th in rushing yards per attempt. I look for Chubb to have one of his biggest games in fantasy football this weekend.

JuJu Smith-Schuster and James Conner are out for this game. As a result, James Washington will see an increase in targets. Washington has started to look solid over the past few weeks and now gets one of the worst secondaries on Sunday in the Cincinnati Bengals. The Bengals rank 24th in passing yards allowed per game and 32nd in yards allowed per pass. I look for Washington to finally have a big game fantasy football wise this Sunday against the Bengals. 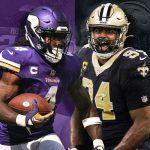