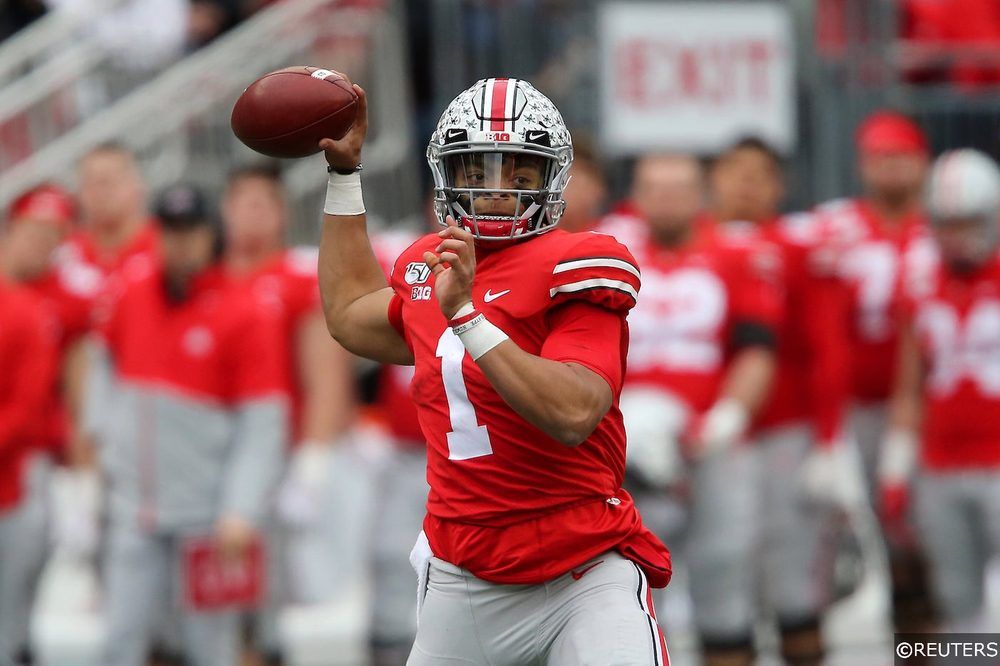 Since graduating from Davidson (The College That Stephen Curry Built), I have been writing about sports--just about any and all you can think of!--and coaching tennis in Atlanta, Ga. Beyond the four major sports, I am an avid tennis fan and cover the ATP Tour on a daily basis. If I'm not busy writing, you can generally find me on a tennis court or traveling the world wherever a sporting event takes me.
@Dimonator133
Updated: 9:21 AM ET December 18, 2019

The 2019 Heisman Trophy was awarded this past Saturday, won—as expected—by LSU quarterback Joe Burrow. Three days later, it’s time (heck, past time!) to start talking about the 2020 Heisman. Yes, the early odds are already out; so let’s take a look at the favorites.

In just about any other year, Fields probably would have won the Heisman. Burrow was just too good. The transfer from Georgia finished the regular season with a ridiculous 40 passing touchdowns and just one interception in addition to his 2,953 yards. He also rushed for 471 yards and 10 scores, helping the Buckeyes compile a 13-0 record and current No. 2 ranking. With his second year as a starter forthcoming, Fields should only be getting better. Scary.

Lawrence went into the season as the second favorite behind Tua Tagovailo and finished seventh in the voting, but that is not to say he was bad by any means. The sophomore completed 68.8 percent of his passes for 3,172 yards, 34 touchdowns, and eight interceptions. His TD-to-INT ratio over the past six games is 20-to-0 and he has thrown at least three touchdowns in eight straight outings. Lawrence has led the Tigers to an undefeated record and a showdown with Ohio State in the College Football Playoff (Fiesta Bowl). Our free college football predictions have you covered for every bowl game.

Will the stiff-armed statue remain in the SEC—even the SEC West for that matter? Jones, a sophomore, gained valuable and unexpected experience in 2019 due to Tagovailoa being sidelined. He has passed for 11 touchdowns (has also run for one) to go along with three INTs. Who knows what Jones can do leading the Crimson Tide for an entire season?

Could the Iron Bowl go a long way in determining the Heisman Trophy? It was Nix vs. Jones this year, too, as Tagovailoa was already sidelined by his hip injury. Nix passed for one touchdown and ran for another, and he did not turn the ball over en route to a 48-45 Auburn victory. For the season, the freshman accounted for 22 total scores (15 passing, seven rushing) and threw six interceptions. The Tigers will face Minnesota in an intriguing Outback Bowl.

Lawrence did not even get invited this season, but he easily could have along with Wisconsin running back Jonathan Taylor. That’s not say he will get sympathy votes in 2020, but he also may not need ‘em. Lawrence is clearly talented enough to be the best player in college football, especially with the pieces he always has around him.

Georgia is Running Back U, and it should maintain that distinction in 2020. With D’Andre Swift gone and Jake Fromm not exactly improving year by year, the Bulldogs could be White’s team next season.