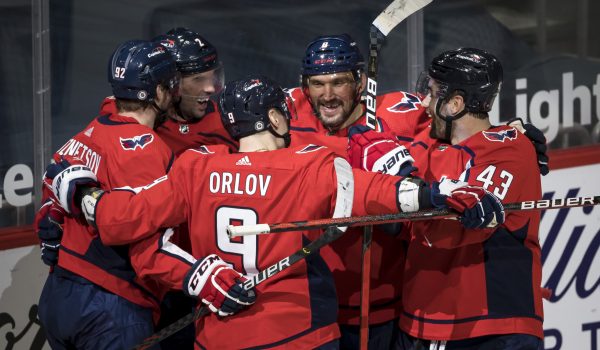 We’ve only got four games on deck for Friday in the NHL, but we’ve got a huge four-leg parlay at over a 15/1 payout to go with it. We had a great night in the NHL on Thursday, hitting our mega parlay last night and now we look to make it two in a row.

The Washington Capitals are coming off of their fifth win against the New Jersey Devils this season to give them their eighth win in their last nine games. Evgeny Kuznetsov came up huge for Washington, scoring two goals in their game against New Jersey, including what would be the game winner midway through the third period. It should come as no surprise that the Capitals were the much more physical team, outhitting the Devils by a margin of 26-9. The Capitals have more depth and certainly have more to play for than the Devils so look for the Capitals to have a lot more energy in this one as they play in back-to-back days. The Devils lacked consistency throughout Thursday’s game as they got 11 shots on goal in the first period and then just 13 for the remainder of the game. Washington is 5-0 against the Devils so far this season and I don’t see that changing on Friday night.

Be sure to also check out our full-game preview for New Jersey Devils vs. Washington Capitals.

Jordan Binnington will get the night off for the Blues and back up Ville Husso will get the start. Husso has a good record at 6-3-1, but his goals-against average is at 3.40 and his save percentage is at .885. Any time two backup goalies are playing and both of their save percentages are under .900, there is a good chance for a high-scoring game. The Ducks are averaging 4.33 goals against over their last nine games, which will make Blues leading scorer David Perron very excited to add to his four points in his last three games. In the four games these two have played head-to-head this season, two of them have gone over the total and the Blues have gone over the total in two of their last three games. This will likely be a sloppy game with the Blues playing back-to-back, and with these goalies in net you have to pick the over.

Be sure to also check out our full-game preview for Anaheim Ducks vs. St. Louis Blues.

Heading into Thursday night’s schedule, the Coyotes were four points back of the St. Louis Blues for the fourth and final playoff spot. They are coming off a shootout victory against one of the best teams in the league in the Colorado Avalanche. They will be looking to keep the good play going and extend their streak to two games. The Coyotes don’t have any offensive superstars on their team, but they have a solid group of players that can attack in waves and cause problems for their opponents defensively. They are also solid defensively and should be able to shut down the limited offensive threat that the San Jose Sharks pose. Sharks are currently allowing the fourth-most goals against per game in the NHL at 3.35. It doesn’t help that they have a goaltender in Martin Jones, who has a 3.23 GAA and a .902 SVP. That isn’t good enough for a team that gives up plenty of scoring chances.

Be sure to also check out our full-game preview for San Jose Sharks vs. Arizona Coyotes.

The Calgary Flames have lost all the momentum they might have had when hiring their new head coach Darryl Sutter. They have lost four of their last five games, including two in a row to the Ottawa Senators–one of the worst teams in hockey. Calgary is on a three game losing streak and they are starting to look like sellers for the upcoming trade deadline. Sean Monahan and Johnny Gaudreau were both point per game players just two seasons ago; now neither of them are even close to that mark. The Jets are tied for first place in the North Division and are on a two-game winning streak. They have only allowed one goal and scored nine in their last two games. They have arguably one of the strongest top six cores in the NHL, which has allowed them to score 3.3 goals per game–eighth best in the league. In their last 10 games, the Flames are only averaging 2.3 goals per game and have only scored two goals in their last three.

Be sure to also check out our full-game preview for Winnipeg Jets vs. Calgary Flames.