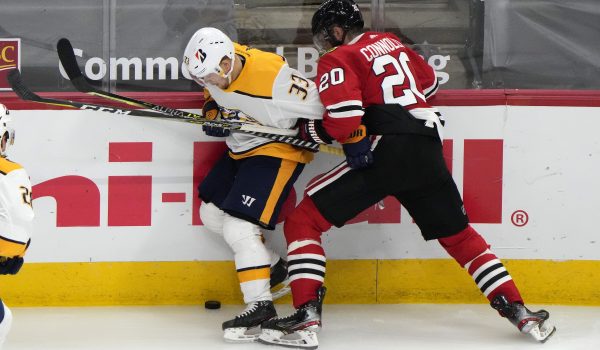 We’ve got five games on deck for Friday in the NHL, and we’ve got a four-leg parlay at over a 19/1 payout to go with it.

Since acquiring Taylor Hall, the Bruins have been playing great. They have averaged 3.6 goals in their last five games and have only allowed six goals in total during that stretch. They’re climbing the playoff standings right now, and they’re six points ahead of fifth place with two games in hand.

The Sabres are scoring the second-fewest goals per game with only 2.35 while allowing the fifth-most goals per game at 3.33. Boston has the best faceoff percentage in the NHL right now, winning 55.7 percent of draws. Most of that stems from Patrice Bergeron, who is winning 62.2 percent of faceoffs–also good for best in the league.

It was an easy win for the Bruins last night. They’re now 5-0 against the Sabres this season, and it should be another cakewalk for Boston. They’re on a six-game winning streak, as well, making them one of the hottest teams in the league. Boston is averaging a .920 SVP over their last 10 games, no matter who they elect to start in the net they should have the upper hand on the Sabres.

Be sure to also check out our full-game preview for Boston Bruins vs. Buffalo Sabres.

The New York Rangers are one of the hottest teams in the NHL right now. They have won five of their last seven games. Their top scorers seem to have caught fire, especially Mika Zibanejad–who was ice cold for the majority of the first half of the season. In his last seven games, he has nine points. Artemi Panarin has also been hot as of late, with 10 points in his last five games.

The Rangers are allowing just 2.65 goals per game. Their penalty killing has been solid; it currently ranks fourth-best in the NHL. Heading into Thursday night’s game, the Rangers are 3-3 against the Philadelphia Flyers this season in six meetings, so it is a fairly even matchup. But with the current state of the Rangers’ game, I like them a little more.

The Flyers are an absolute mess right now. They have been awful defensively, allowing 3.51 goals per game (second-most in the league). There is controversy all throughout their lineup, as some of their star players and goaltenders have been getting healthy scratch treatment. They are just 5-12 in their last 17 games.

Be sure to also check out our full-game preview for Philadelphia Flyers vs. New York Rangers.

On Wednesday night, the Nashville Predators were cruising to their second win over the Blackhawks in a row up 4-1 in the third period when they took their foot off the gas and Chicago scored three goals to tie it up and then eventually win it in overtime.

Nashville is 6-3-1 in their last 10 and has been playing great over the last three weeks. During that 10-game stretch, they have averaged 3.2 goals for and 2.4 against with a 90% penalty-killing unit. The Predators have been riding the hot hand of Juuse Saros this season with his .925 save percentage and 2.32 goals-against average.

The Predators outshot the Blackhawks 40-30 on Wednesday and Malcolm Subban won the game for Chicago. But the Blackhawks continue to allow too many chances to the opposition as their shots against average is at 31.4 over their last seven games. Nashville has won six of the seven meetings this year between the two and will not allow the mistake of letting Chicago back in the game again.

Be sure to also check out our full-game preview for Nashville Predators vs. Chicago Blackhawks.

The Minnesota Wild completed their sweep over the Arizona Coyotes to extend their winning streak to five games. Minnesota is sitting comfortably in third place in the West Division as they lead Arizona who is in fourth place by 16 points. Now they travel to play their last game of the season against the Los Angeles Kings, leading the series 5-2.

On Wednesday it was netminder Cam Talbot who stepped up on a night that their offense was struggling to help grab two points in a game they were outshot 40-23. Talbot finished with 39 saves for a save percentage of .975 to improve to 16-6-3 on the year. A month ago Los Angeles found themselves in a tight playoff race, but their lackluster play of late has put them in seventh place in the West Division and five points out of a playoff spot. The Kings only have four wins in their last 13 games and are only 8-9-4 on their home ice this season. The Wild have been tremendous against teams with losing records this season and the Kings are 0-8 in their last eight games following a win.

Be sure to also check out our full-game preview for Minnesota Wild vs. Los Angeles Kings.