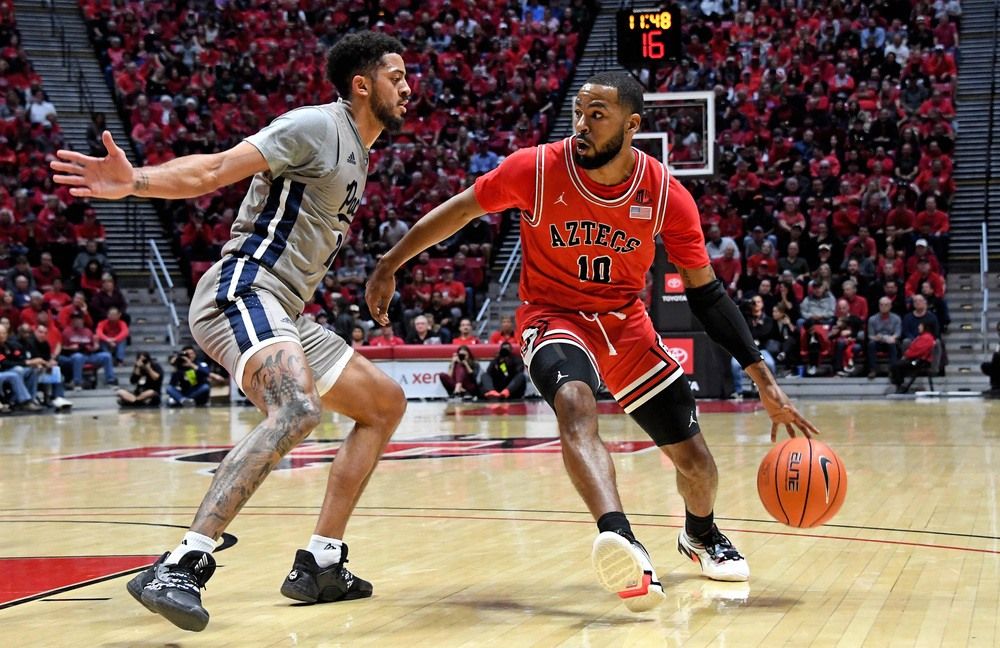 The College Basketball season has been one of the most exciting seasons we have seen in years. There doesn’t look to be a clear favorite like years past, yet there are plenty of teams that have flexed what they got. The San Diego State Aztecs find themselves as the lone unbeaten team left. North Carolina has fallen into a pit, while the Big Ten Conference has become must-see basketball. What about Rutgers being ranked for the first time since 1979. Plenty of drama, and it isn’t even March yet. It’s time to look at whether or not San Diego State is College Basketball’s Best, or is it someone else?

The San Diego State Aztecs find themselves as the lone remaining unbeaten team in College Basketball. Chances are they stay that way all the way until the NCAA Tournament in March, as their hardest games came early in the season. The Mountain West looks fairly decided already, as they face-off with Wyoming in their next game with a shot at 20-0. Wins at BYU, and against both Creighton and Iowa in the Las Vegas Invitational moved the Aztecs into the top 25 early, and they haven’t looked back. A game against Utah State looks to be their hardest challenge remaining. Malachi Flynn and Yanni Wetzell have been the key to this Aztec run. If they are to continue and prove themselves the best those two players must continue their run.

The Baylor Bears have been one of the biggest surprises in College Basketball, and their terrific run has resulted in the top spot in the AP Poll. The Bears have some of the best wins in the entire country, and that list includes a win over Villanova in the Myrtle Beach Invitational along with home wins over Arizona and  Butler. They kept it going with a pair of Big 12 road wins over Texas Tech and Kansas. The Bears get a real test with a road visit to Florida as part of the Big 12-SEC Challenge this Saturday. Baylor has the top spot, but can they really roll through the rest of the schedule unblemished. Freddie Gillespie has turned into one of the best big men in the Big 12.

Gonzaga is on a tear, and it has become a usual event for the Bulldogs year in and year out. The Bulldogs one blemish came against Michigan in the Battle 4 Atlantis Tournament in November. Impactful wins for Gonzaga include a true road win at Texas A&M, an overtime win over Oregon in the Bahamas, road victories at both Washington and Arizona, and a home win against North Carolina. Though that win over the Tar Heels doesn’t mean anything this season, Gonzaga has proven they belong among the elite every season. They have plenty of tough road games in the WCC ahead, but Gonzaga looks to be the king of the West once again.

Florida State has been unbeatable at home this season, and in most cases hard to stop on the road as well. The Seminoles are currently 16-2 and 6-1 in the ACC. They are tied with Louisville atop the conference, but they hold a major road victory over the Cardinals. FSU’s losses came against Pittsburgh early in the schedule and their most recent defeat came at the hands of Indiana in the Big 10-ACC Challenge. Those losses were both on the road. The Seminoles have added wins against Florida, Tennessee, Purdue, and Virginia. The Noles look to be in a position to emerge out of the ACC, but tough road games at Virginia and Virginia Tech ahead, Florida State could easily fall out of this conversation. Regardless the Seminoles are playing outrageous defense and it could take them to a new level.

Myles Powell should be held among the favorites for National Player of the Year. Not only is he among the best players in the country, but his Seton Hall Pirates are arguably among the best teams. They had a tough late November and early December, but the Pirates have turned it around quickly. They gave Michigan State all they could handle on November 14th, but it wasn’t enough. Other losses include against Oregon and in what seemed like an ugly road loss at Rutgers, has turned into a benefit for Seton Hall. They have since gone on to a major home win against Maryland and is 6-0 in the Big East. That includes a road win at what was #5 Butler. Things are only looking up for Seton Hall to emerge as the Big East’s best team.

The preseason’s favorite Michigan State has had their up and downs this season, but they have always found a way to rebound. The Spartans are 14-4 (6-1) as they head on a two-game road trip. They make a visit to Indiana on Thursday, and following two losses in their two meetings last season, MSU will be hoping for a better performance. They must also avoid the struggles that presented themselves in their last road game at Purdue. Cassius Winston and Xavier Tillman have led the Spartans to a championship level, but Aaron Henry and Gabe Brown must stay consistent as the third and fourth options. The Spartans’ losses are to Kentucky, Virginia Tech, Duke and Purdue thus far. They do have key victories at Seton Hall, and two solid wins over Georgia and UCLA in Maui. Add in conference victories over Rutgers, Michigan, Wisconsin, and Illinois. Their next two games will be telling, as four of their six Big Ten games so far all were at the Breslin Center. If they can get some road wins, then the Spartans belong in the elite conversation. Behind the Big Ten’s all-time assist leader, things are looking up.