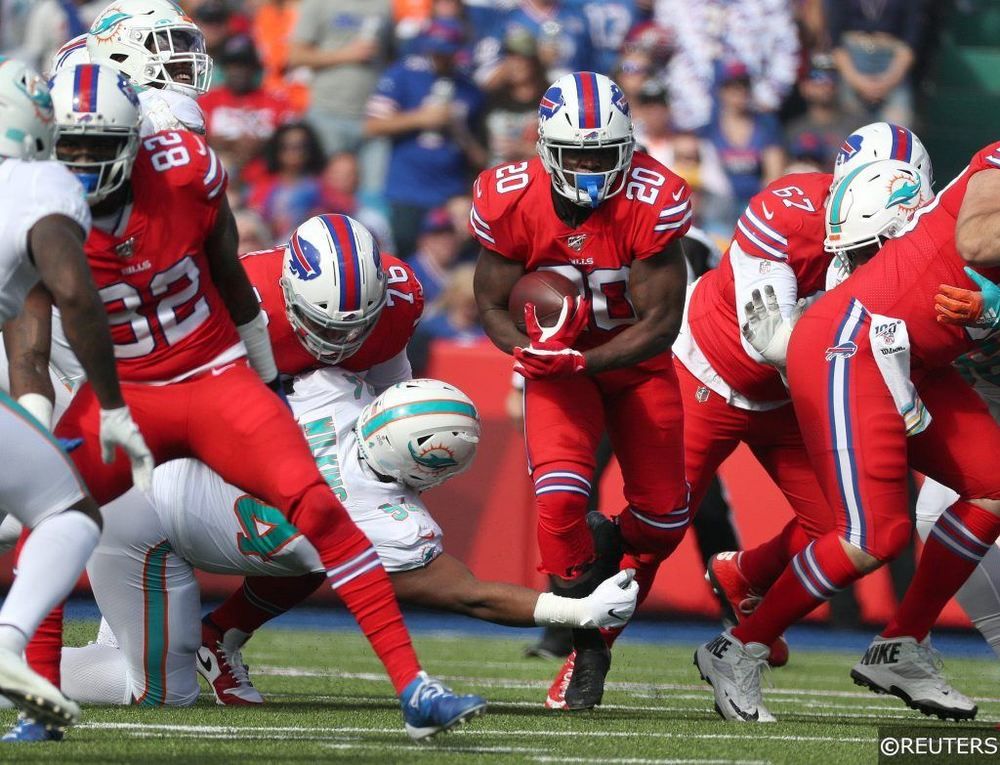 Frank Gore is returning for a 16th NFL season. This time, he’ll be taking his Hall of Fame pedigree to New York, as the veteran signed a one-year deal with the Jets today.

Gore’s accomplishments are undeniable; he’s third all-time in rushing yards and rushing attempts. The former 49ers star has still managed to be productive since leaving San Francisco in 2015. Since that time, he’s played for the Colts, Dolphins, and Bills, and he’s only missed a pair of regular season games during that span.

However, the Jets certainly aren’t getting the early-2010s version of Frank Gore. Instead, they’re getting the soon-to-be 37-year-old version who had a career-low 3.6 yards per carry in 2019. While Gore can contribute several ways within an offense, it’s clear that he doesn’t have a whole lot left in the tank.

In other words, today’s signing doesn’t do anything to influence the Jets future odds, including their 6.5 wins over/under, their +700 division odds, their +3000 conference odds, and especially their +6600 Super Bowl odds.

However, Gore could end up influencing Le’Veon Bell’s future odds.

There were reports that Jets head coach Adam Gase wasn’t a proponent of adding the All-Pro running back, and the coach’s opinion seemed to be validates during Bell’s first season in New York. While his underwhelming numbers could partly be attributed to a dysfunctional offense and lackluster offensive line, Bell still disappointed with 789 rushing yards and three touchdowns on 245 carries (3.2 yards per carry). He also added 66 receptions for 461 yards and one score.

So how does Gore factor in? Well, while Gase doesn’t sound like he’s a giant Bell fan, the head coach is a huge supporter of Gore. Gase was Gore’s head coach when the two were in Miami, and the duo also spent some time together with the 49ers. Even though Gase wasn’t coaching the running back last season, he still found time to praise the future Hall of Famer.

“It’s unbelievable,” Gase said. “If you watched him work day-in and day-out, it wouldn’t surprise you. We would always say, ‘Hey, we think you should take today off,’ and he’s like, ‘Wednesdays, I’m practicing.’ And he wants every rep. You’re in full pads and he’s going at it like it’s Sunday. That’s just how he looks. That’s how he’s always been. He loves football. There’s no other place he’d rather be than the practice field, gameday. Everything about football, he loves.”

Case previously said that he wants to lessen Bell’s load next season, and Gore will certainly make that a reality. However, the veteran could do a whole lot more than just spell the starter. Instead, Gore could legitimately steal carries from Bell, which vicariously impacts the younger teammate’s future odds.

Bell was already a long shot to win MVP next season at +15000 odds, but today’s news certainly doesn’t help his chances. We’d also be more inclined to take the under on Bell’s rushing yards (850.5, -110).

Gore’s signing doesn’t really help the Jets, but his addition certainly won’t hurt. Ultimately, the only relevant person who’s drastically impacted by this transaction is Bell.