March Madness 2021: Why Michigan is the biggest threat to Gonzaga 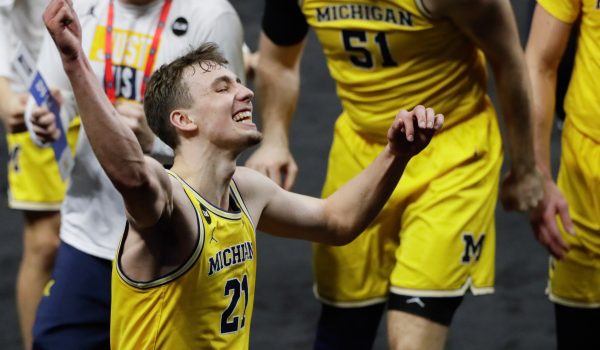 It was a truly wild first weekend, and now we’ve got a bit of a break from NCAA Tournament action. March Madness certainly hasn’t disappointed so far, and things will really kick into a new gear this weekend with the Sweet 16. This special tournament only happens once a year, so it’s a great time to go big and bold. With that in mind today we’re bringing you our boldest take, which is that Michigan is the biggest remaining threat to Gonzaga’s national title hopes.

But first, let’s talk about Michigan:

They’re flying under the radar

The fact that March Madness has been such a disaster for the rest of the Big Ten may ultimately end up working in Michigan’s favor. They’re the only team left standing from the conference, and just about everybody in the national media has spent the past week declaring the Big Ten fraudulent.

It’s easier to play with low expectations, and Michigan started to get seriously disrespected to the point seemingly everyone was picking LSU to get the upset over them in the Round of 32. They aren’t feeling the weight a typical one seed might be right now, as everyone has discounted them following the injury to Isaiah Livers. Which brings us to our next point.

The Isaiah Livers loss isn’t as big as it seems

People started writing off Michigan before March Madness even began after the news about Livers’ injury broke. Sure he’s a key piece to be missing, but I think the situation has been overblown, and his absence isn’t being felt nearly as strongly as some might think. Livers is a great shooter, but Franz Wagner, Eli Brooks, Mike Smith, Chaundee Brown, and Brandon Johns all shoot at least 37 percent from downtown.

That’s every player in the rotation outside of the two bigs Hunter Dickinson and Austin Davis. In other words, they’ve got plenty of perimeter shooting still, and Dickinson can take care of things in the paint. They’ve scored at least 82 points in each of their two tournament games and just shot 54 percent from the floor against LSU, so I don’t think offense is going to be a problem without Livers. This is still an elite unit.

Extra Entry 🔥
– Tag a friend in the comments below!

They can slow down Gonzaga’s offense

Gonzaga is a true juggernaut offensively, and the clear favorite to win the tournament at this point. Of the other remaining top teams like Alabama, Houston, Baylor etc., I think Michigan easily has the best chance to slow them down. I was extremely impressed with what I saw from the Wolverines defensively in the Round of 32.

They managed to beat the Tigers solidly despite the fact that LSU only turned the ball over three times all game. That’s because they played extremely stout defense in the half court, limiting LSU to just 39.1 percent shooting. LSU was top five in offensive efficiency this season according to Kenpom, so that’s no small feat.

Gonzaga is in a league of their own, but I think Michigan has the horses to knock them off their game. Dickinson’s rim protection gradually got better as the season went on, and the freshman seven-footer will be able to contain Gonzaga big Drew Timme in the post. The Wolverines have some lengthy wings who can make life difficult for Corey Kispert.

It won’t be easy, but for all the reasons above I think they’ve got the best chance to knock off Gonzaga in a potential Final Four meeting.