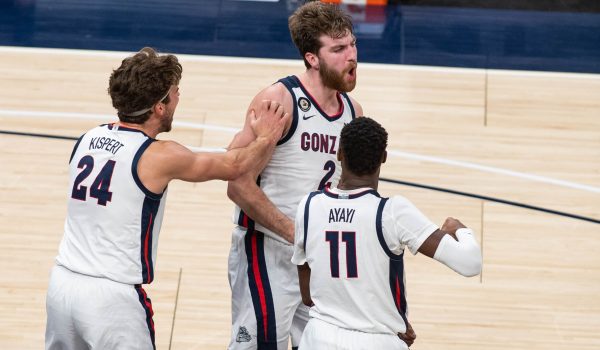 The Sweet 16 certainly didn’t disappoint, and we’re now full steam ahead into the Elite Eight. That’s right, we’re back for the back half of the second weekend of the NCAA Tournament with another mega parlay, where we’re counting on the favorites to keep things chalky. March Madness only comes once a year, why not celebrate the special occasion by going for a big payday?

Oregon State has been a great story so far, but I think their run unfortunately comes to an end here. The main reason for their success in the tournament feels a bit fluky, as they’re shooting 38.9 percent from downtown while their opponents are shooting just 23.1 percent from beyond the arc through three games. Against a really tough Houston defense, I don’t see them shooting 39 percent from three. Per Shot Quality, Oregon State would be expected to lose all three of their NCAA Tournament games based on the quality of shots taken by each team. That suggests they’ve been getting a bit lucky with opponents just missing open shots rather than any magical defense they’re playing.

In the nightcap of Monday’s Elite Eight action, I think Baylor is going to roll. They just beat Wisconsin and Villanova by double digits, and they should do it again here. Baylor’s offense got all the attention during the regular season, but their defense has actually been carrying them so far. They held Wisconsin to only 63 points, and then Villanova to just 51. They managed to beat Villanova by double digits despite shooting just three of 19 from downtown. Their high-flying offense should have a lot more success in this fast-paced game. Arkansas just barely squeaked past Oral Roberts, and their game before that against Texas Tech came down to the final possession as well. That’s not sustainable.

To open up the Tuesday mini-slate, I think Gonzaga is going to continue their march to a national title with another dominant win here. They just blew past Oklahoma and Creighton without breaking a sweat, and managed to beat Oklahoma by 16 despite shooting their lowest percentage from the floor of the entire season. USC’s defense has been stout, but they haven’t faced anything like this Gonzaga offense. The Bulldogs are nearly impossible to slow down on that end, and they’ve really stepped up their defense in the tournament. The Trojans’ recent success has caused this line to get reduced a bit, as I think we would’ve seen it crack double digits had this game been played a week or so ago. Take the value with Gonzaga.

To wrap up the Elite Eight, I’m going with Michigan on Tuesday. Apologies if it’s boring to go straight favorites, but I think that’s the way you have to look. Underdogs dominated the first round of the tournaments, but favorites have been clawing back ever since as the cream rises to the top. The Wolverines just completely smothered Florida State, controlling that game from start to finish. UCLA beat Alabama, but it took them until overtime to do it and they only won because of a bunch of Crimson Tide miscues, including 14 missed free throws. Needless to say, Michigan isn’t going to go 11/25 from the charity stripe.