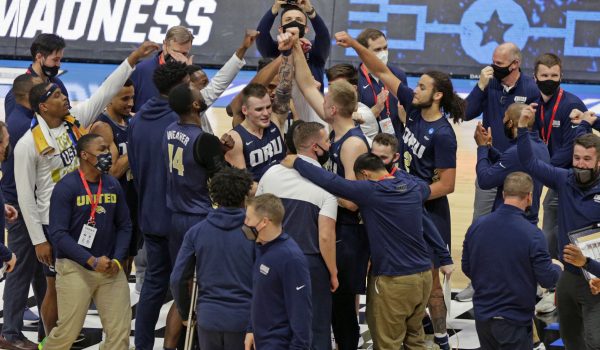 The Round of 64 certainly disappoint, and thankfully we’ve got another two full days of March Madness before we take a break. That’s right, we’re back for the Round of 32 with another mega parlay, where we’re counting on Oral Roberts to pull off another upset. The NCAA Tournament only comes once a year, why not celebrate the special occasion by going for a big payday?

Wisconsin was getting disrespected in the media, and they quickly silenced all the doubters with their Round of 64 domination of North Carolina. They’re one of the most experienced teams in this tournament, as each of their top five scorers are seniors. That means they’re the perfect team for this moment, and for this upset. Brad Davison just scored 29 points against UNC, and if he’s hot then this Badgers team is very hard to beat. Baylor didn’t look at all impressive to me in their opening win over lowly Hartford, playing sloppily and failing to cover the spread. If they can only shoot 41 percent from the field against Hartford, things could get ugly against this stout Wisconsin defense. +215

Texas Tech is another team not getting the respect they deserve. The defense is starting to play like the elite Chris Beard units we’ve seen in the past, and the offense is getting much more efficient. They absolutely smothered Utah State in the first round, and I think Mac McClung will keep it going here in the second. Arkansas struggled with Colgate, and though they pulled away in the end, I think it revealed plenty of red flags with the team. The Razorbacks want to get out and run, and Texas Tech’s slow as molasses pace will throw them out of sync. If you want to beat Texas Tech’s intense defense you need to shoot well from deep because you aren’t beating them off the dribble, and Arkansas isn’t a very good shooting team. This is a bad matchup for their offense.

To bring this parlay home, we’re counting on Oral Roberts to strike lightning twice. Their win over Ohio State wasn’t a fluke, this offense is legitimately dynamic. Max Abmas and Kevin Obanor are capable of being stars at high majors, and their offense can easily keep up with Florida’s here. Florida didn’t look all that great in their opening win over Virginia Tech, and I certainly think Oral Roberts has a better than 1/4 chance of winning this game like these odds suggest. The Golden Eagles have two elite scorers, played the Buckeyes really well defensively, and are one of the best free throw shooting teams in the country, an invaluable asset in March. At the very least, they’re going to play Florida close. +290