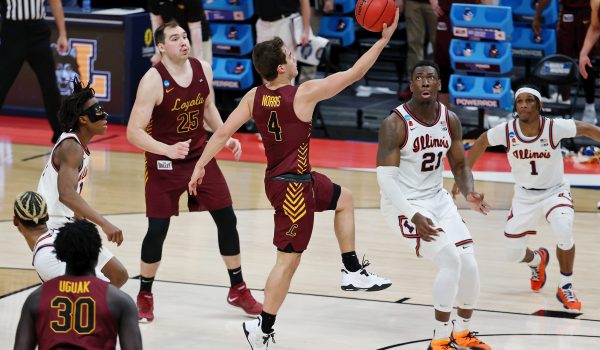 What a day. The first half of the 2021 NCAA Tournament Round of 32 is officially in the books, and the action was truly jam-packed. We had even more upsets, down to the wire finishes, everything you could ask for. We’ve got another full day of Round of 32 action coming up, so be sure to check out our March Madness hub to stay on top of everything that goes on. Also, be sure to check out our picks on the side and total for every single game in the tournament.

But before you start thinking about your Monday wagering, let’s take a look back at what just happened and digest a few of the main takeaways. Here’s where my head is at after Sunday’s games:

The Big Ten was officially overrated

I was willing to give them the benefit of the doubt after the upsets of Ohio State and Purdue, but not any longer. I think we can officially now say the Big Ten was overrated this season. Wisconsin got pummeled by Baylor, Illinois was shockingly drummed by Loyola Chicago, and then Rutgers melted down in epic fashion to blow a game against Houston on Sunday.

The Big Ten had four of the top seven teams on Kenpom at the end of the year, and now it wouldn’t be all that shocking if they don’t get a single team to the Sweet 16. March Madness has been an unmitigated disaster for the conference, as they were hailed all season long as being historically good. This isn’t going to help their teams’ cases when Selection Sunday rolls around next year. Iowa and Michigan still have a chance to salvage things a bit, but no matter what it’s been ugly.

Be honest, who had these guys going this far? pic.twitter.com/0lldRf7XXK

Oral Roberts is officially your Cinderella

In case it wasn’t clear already, it is now. Every year there’s one underdog team that separates themselves from the pack and establishes themselves as the one we’re all rooting for, and this year it’s Oral Roberts. The Cinderella 15-seed pulled off another shocker on Sunday, coming back to beat Florida.

They trailed the Gators by 11 points with less than 10 minutes left, and I’ll admit I thought it was just about over at that point. The Golden Eagles sure did make me feel foolish. Max Abmas and Kevin Obanor are the breakout stars of this March Madness, and they’ve captured all of our hearts along the way. They’ll now meet Arkansas in the Sweet 16, and after what we’ve seen so far we certainly can’t rule out a trip to the Elite 8.

Loyola Chicago sent Illinois packing on Sunday, and while the loss is still embarrassing, to be honest it wasn’t quite fair to the Fighting Illini. As a one-seed, there’s no way they should’ve ever been playing a team this good in the second round. In hindsight the Ramblers are clearly a top 20 team, at the very least, and the fact that they’re an eight-seed is ridiculous. Kenpom said they had the nation’s most efficient defense at the end of the year, but most people scoffed at that metric since they play in the Missouri Valley Conference.

Kenpom was right. They didn’t just beat Illinois, they dominated them from start to finish, holding one of the best offenses in the country to just 58 points. Senior big man Cameron Krutwig is a legit star, as he chipped in 19 points, 12 rebounds, five assists, and four steals while dealing with a nightmare matchup against Kofi Cockburn in the post. The Ramblers held Ayo Dosunmu, one of the best players in the Big Ten, to just nine points, and this team has a very realistic path to their second Final Four in the past few seasons.

College Basketball 7 days ago
March Madness by the numbers: The under dominates the tournament