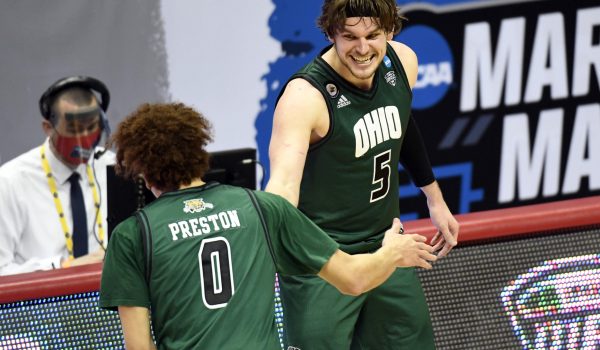 The Round of 64 and beginning of the Round of 32 certainly disappoint, and thankfully we’ve got another full day of March Madness before we take a break. That’s right, we’re back for the second day of the Round of 32 with another mega parlay, where we’re counting on Ohio to pull off another upset. The NCAA Tournament only comes once a year, why not celebrate the special occasion by going for a big payday?

Oregon shouldn’t be this big of an underdog here. People still don’t seem to realize that this team is completely different than the one we saw in the first half of the season. Ever since starting point guard Will Richardson returned they’ve been on fire, and the dominant wins of teams like UCLA, Oregon State, and USC have proved that the PAC 12 is just much better than everyone realized. On the other hand the Big Ten has been exposed as a bit overrated, and I don’t think Iowa looked particularly impressive in their win over Grand Canyon. The Ducks can beat you in a variety of different ways, and each of their top five scorers are shooting at least 36 percent from downtown, making them incredibly hard to guard. +200

Ohio pulled off one upset already with their win over Virginia, and I think they’ll make it two in a row here. Creighton didn’t look good at all in their razor-thin win over UCSB in the Round of 64, and they only won at all because UCSB choked away the final minute. They looked nearly evenly matched against that Big West opponent, so I don’t see why they’d be such a big favorite over Ohio. Jason Preston is a legit star, and what’s crazy about Ohio is that they knocked off the Cavaliers despite playing far from their best game offensively. Ben Vander Plas hit big shot after big shot, and I think he’ll have a field day here against this undersized Creighton defense.

Enough with the money line ‘dogs, we’re closing things out with Florida State in this game that has a nearly even spread. I know I just touted the strength of the PAC 12, but I think Colorado’s big win over Georgetown had more to do with Georgetown just not belonging in the tournament than anything else. M.J. Walker should now be close to 100 percent healed from his ankle injury, and I’m expecting a big game from him here. The Buffs aren’t really anything special, and now is the perfect time to fade them and sell-high as their blowout of Georgetown is fresh in everybody’s mind. This Seminoles team is deep, and they shoot 39 percent from beyond the arc as a squad.