March Madness Round of 32 Day 2 Reaction: Give the PAC 12 all the respect 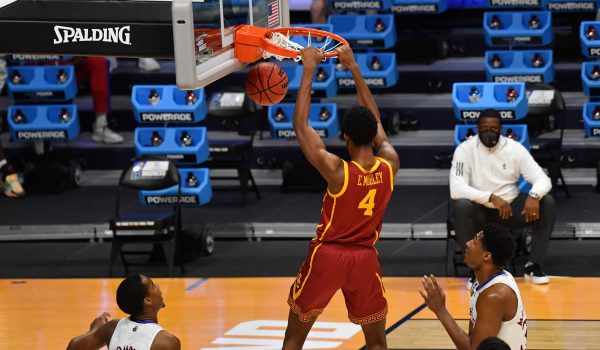 What a day. The first weekend of the 2021 NCAA Tournament is officially in the books, and the action was truly jam-packed. We had a ton of upsets, down to the wire finishes, everything you could ask for. We’ve got the Sweet 16 coming up, so be sure to check out our March Madness hub to stay on top of everything that goes on. Also, be sure to check out our picks on the side and total for every single game in the tournament.

But before you start thinking about next weekend’s wagering, let’s take a look back at what just happened and digest a few of the main takeaways. Here’s where my head is at after Monday’s games:

Give the PAC 12 all the respect

It’s officially the main story of the tournament so far. The PAC 12 has been downright dominant, and they’ve got four teams in the Sweet 16, which nobody saw coming. Oregon State has pulled off back to back big upsets, UCLA has won three in a row including their First Four victory, USC just beat the brakes off of Kansas, and Oregon made light work of Iowa.

They’ve truly been putting on a clinic, and it’s hard to understate just how much they’ve done for the conference’s reputation heading into next season. When next year’s Selection Sunday rolls around, the committee is going to remember this incredible run. USC and Oregon will be playing each other next weekend, so they’ll have at least one team in the Elite 8. Oregon State has a winnable game against Loyola Chicago, and UCLA can hang with Alabama.

A slow start for both teams, but the pace is picking up!

This may sound hyperbolic, but I don’t see how Gonzaga loses a game. Oklahoma played pretty much lights out in the first half, more or less the best half I could’ve envisioned them playing, and they still trailed by 12 at the break. Gonzaga on the other hand shot their lowest percentage from the floor of the entire season, and still dominated the Sooners and won by 16. That season low percentage? 49 percent, AKA a very good shooting night for most teams.

They’ve stepped up their defensive intensity in the tournament, and their offense is virtually impossible. Drew Timme dropped 30 points against Oklahoma, and he did it effortlessly on only 12 shots from the field. Unless they have a cataclysmic meltdown, which is certainly possible given the stakes and pressure involved, I think we’re looking at our next national champions.

Michigan can redeem the Big Ten

For just as much talk there’s been about the PAC 12, there’s been more about the Big Ten and their shortcomings. After getting widely hailed as the best conference in the country all season and having four of the top seven teams on Kenpom, they’ve thoroughly embarrassed themselves in March Madness. Michigan can change all that. The Wolverines are the only Big Ten team to make it to the Sweet 16, but I think they’re good enough to be one of the closest contenders behind Gonzaga.

I was impressed with their second half against LSU, and they managed to beat the Tigers solidly despite LSU only turning the ball over three times all game. They moved the ball really well, racking up 22 assists to LSU’s eight. They have the kind of chemistry necessary for a deep run in March, and the Big Ten obituary may have been written just a touch early.