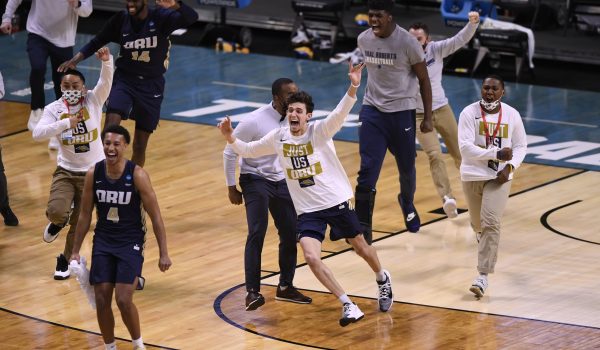 We’re down to 16 teams remaining in the quest for the National Championship, with four games on Saturday and another four on Sunday to see who will move on to the Elite Eight. We’ve selected one team that is favored in their Sweet 16 matchup that is vulnerable to being upset, and one underdog to target as a team to bet on, perhaps even on the money line.

Make sure you check out our picks on the side and total for every Sweet 16 game, as well as every game for the entire NCAA Tournament.

Houston was fortunate to escape in their second-round game against Rutgers. The Cougars trailed by eight with under five minutes to play, but finished the game on a 13-2 run to advance to the Sweet 16. They now face Syracuse and their 2-3 zone, and while they will have the whole week to prepare, it warrants Houston receiving the vulnerable tag. Per Synergy, Houston ranks in the 70th percentile against zone defenses this season. Pretty good, but it is still worse than their ranking of 81st percentile against man defense. The vulnerability comes from Houston’s two-point percentage on offense, where the Cougars rank just 162nd in the country. Thanks to their zone, Syracuse gives up the 52nd fewest shot attempts near the rim, so it’s possible we see Houston struggle from inside the arc once again. Against Rutgers, Houston shot just 37.8 percent on two’s.

On the other end, Syracuse has been shooting the lights out from beyond the arc. Since the start of the ACC Tournament, the Orange are shooting 46.8 percent from three. If that continues, even Houston’s 11th ranked defense could be in trouble. Syracuse also likes to play in transition on the offensive end, ranking just outside the top-100 in transition play rate. This could be their path to potentially beating Houston. Per Synergy, Houston rates as the third-best half-court defense in the country on a points-per-possession basis. They’re also very good at transition defense but rank just 61st in those possessions. If Syracuse can get out and transition and continue their hot shooting, Houston might be on upset alert.

Be sure to check out our full game preview for Syracuse Orange vs. Houston Cougars.

What a finish! Dejon Jarreau and the Houston Cougars pull a win from the clutches of defeat, somehow besting Rutgers, 63-60. One of the greatest come from behind efforts you will ever see (closed game on 14-2 run).

They refused to quit. #Believepic.twitter.com/6Brg5nJ27J

Oral Roberts joins the 2013 Florida Gulf Coast team as the only 15 seeds to make the Sweet 16 in NCAA Tournament history. Florida Gulf Coast lost but covered against the Gators — is it possible Oral Roberts can do the same? It very much is. In fact, these two teams met back in December, an 11-point win for Arkansas, the same spread we see here. Looking at that game though, Oral Roberts actually led by 10 at halftime. Max Abmas played only 32 minutes in that contest as he dealt with uncharacteristic foul trouble. Abmas has played every minute of Oral Roberts’ last five games, so eight more minutes of action could be a huge difference in the outcome of this rematch.

From a matchup standpoint, Arkansas has by far the best pick and roll defense that Oral Roberts has seen in the tournament, as the Razorbacks rank in the 68th percentile. By comparison, Ohio State and Florida ranked in the 17th and 38th percentile, respectively. That gives me pause to pick Oral Roberts to win the game outright, but the Golden Eagles are definitely worthy of consideration of a bet against the spread.

Be sure to check out our full game preview for Oral Roberts Golden Eagles vs. Arkansas Razorbacks.