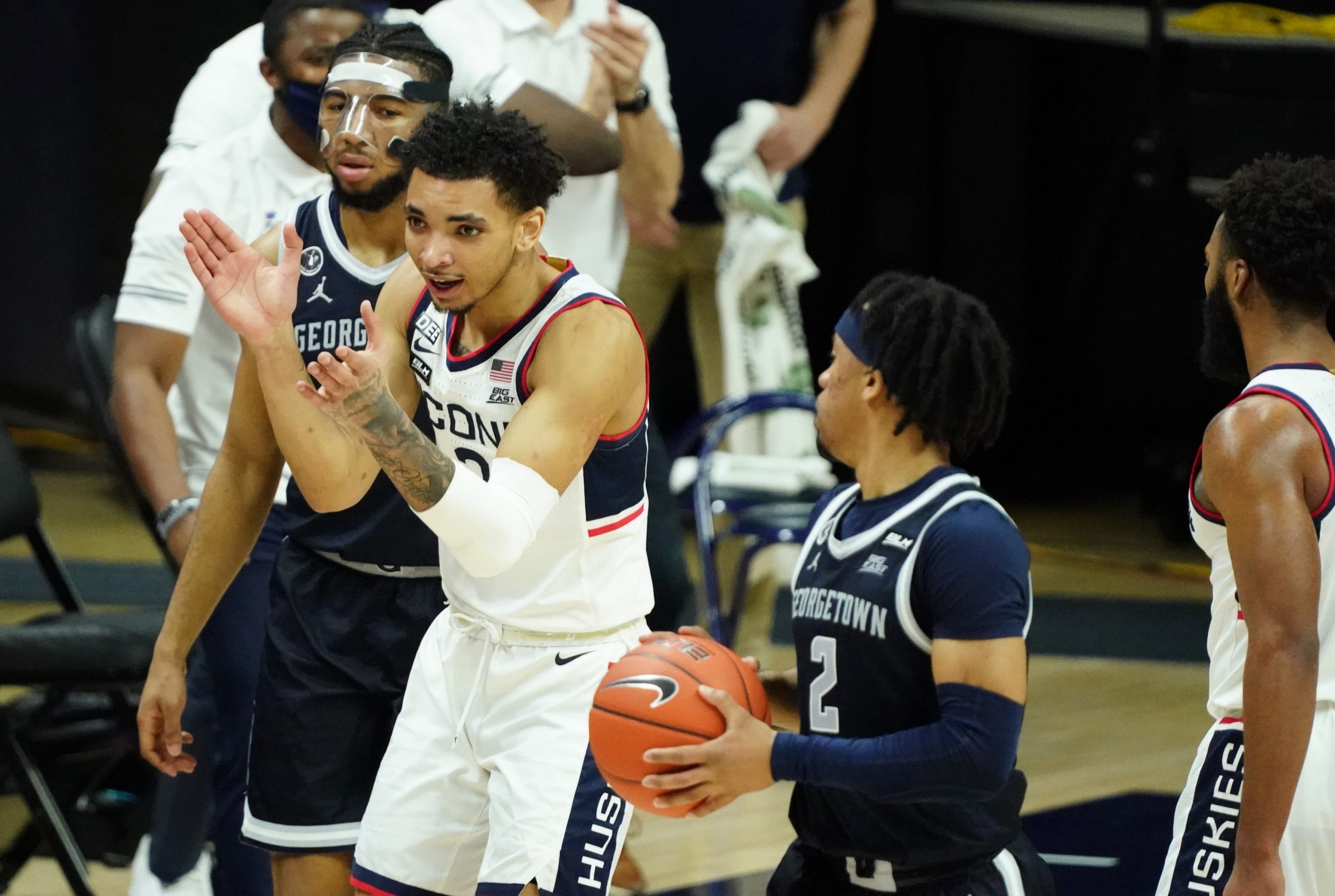 “Who is a sleeper that can make a run?” is perhaps the most-asked question in any setting once the bracket is revealed. There’s a lot of great options this year but selecting the right few is key in cashing a valuable futures ticket, or simply crushing your office bracket pool. These three “sleepers” have a great chance to advance further than anticipated based on where they’ve fallen in the bracket.

Make sure you check out our expert picks on who we think goes on to win it all, as well as our picks on the side and total for EVERY NCAA Tournament game.

UConn is a team that is under-seeded because of the injury to James Bouknight that forced him to miss eight of UConn’s 22 games. The Huskies went 11-3 in the games in the games in which Bouknight played, compared to just 4-4 in the games when he was hurt. UConn received a seven seed because of this, despite being ranked 16th in Kenpom’s efficiency ranking. They’re also a very balanced team, ranking 24th in offensive efficiency and 25th in defensive efficiency, making them a tough out since they can win in several different ways.

On to their draw, where it sets up favorably. In the first round, UConn will face Maryland, a team that had a solid season in a brutal Big Ten conference, but they are by no means a consistent team, evidenced by their 16-13 record. UConn is a 2.5-point favorite in this game. They would likely face Alabama in the second round which would be a tough game, but Alabama is a high-variance team, as they are very reliant on three-point shooting. Alabama shoots threes at the 17th-highest rate in the country, so they are prone to getting beat if the shots aren’t falling.

UConn at +1300 to make the Final Four with FanDuel Sportsbook seems like a solid bet.

The Flames draw Cade Cunningham and the Oklahoma State Cowboys in the first round, but there are some matchup advantages that could lead to a Liberty upset. Liberty’s pack-line defense is very good at forcing teams to make jump-shots against them, as they rank 31st in the country in field goal percentage defense at the rim. Oklahoma State isn’t a great three-point shooting team, shooting just 33.8 percent from beyond the arc. Liberty also is an excellent defensive rebounding team, ranking 14th in that category. On the other end, Liberty ranks 10th in three-point percentage, so they could beat Oklahoma State if the shots are falling.

In the second round, Liberty would likely draw Tennessee if the Vols can beat Oregon State. Tennessee is another good matchup for Liberty, as they ironically also shoot 33.8 percent from three. You need to be able to make threes to beat Tennessee’s defense, which Liberty can do, as mentioned above. Liberty also won’t be intimidated by high-major teams, as the Flames have already played five teams from Power conferences this season. They competed well in all, including winning games against Mississippi State and South Carolina outright.

They may lose in the first round, but if you’re looking to bet a longshot, there are worse choices than Liberty to make the Final Four at +13000, or to make the Sweet 16 if you can find it.

The 8/9 game is always a tricky spot, as not only do you need to win a game against a similar-caliber team to start, the reward would be facing the one seed if you advance. That’s the position LSU finds themselves in, but they are a dangerous team that Michigan will not want to see if the Tigers can get by St. Bonaventure. LSU is only -1.5 against St. Bonaventure, but they are a potent offensive team. LSU ranks fifth in the country in offensive efficiency and have perhaps the largest collection of offensive weapons in the country. Four Tigers average double-figures in scoring, with Cam Thomas leading the way at 22.6 points per game. If they can squeak past St. Bonaventure, their offense gives them a chance, even against Michigan.

Michigan recently lost Isaiah Livers to injury, so there’s a chance they are not the same without him. They still have a lot of great players, but Livers would likely be tasked with guarding Darius Days if they were to face LSU. Days is a powerful weapon for LSU, as he is big enough to rebound both offensively and defensively, but he also spaces the floor with his 39.7 percent three-point shooting. Michigan will be favored and will likely win this game, but LSU’s offense is not something to be taken lightly.

Defense is a valid concern with LSU, but to get the Tigers and their fifth-ranked offense at +1800 to reach the Final Four carries some value.

Don’t go crazy with betting too many sleepers to make a run, as these teams are seeded where they are for a reason, but consider the three above for your futures bets and bracket challenges.