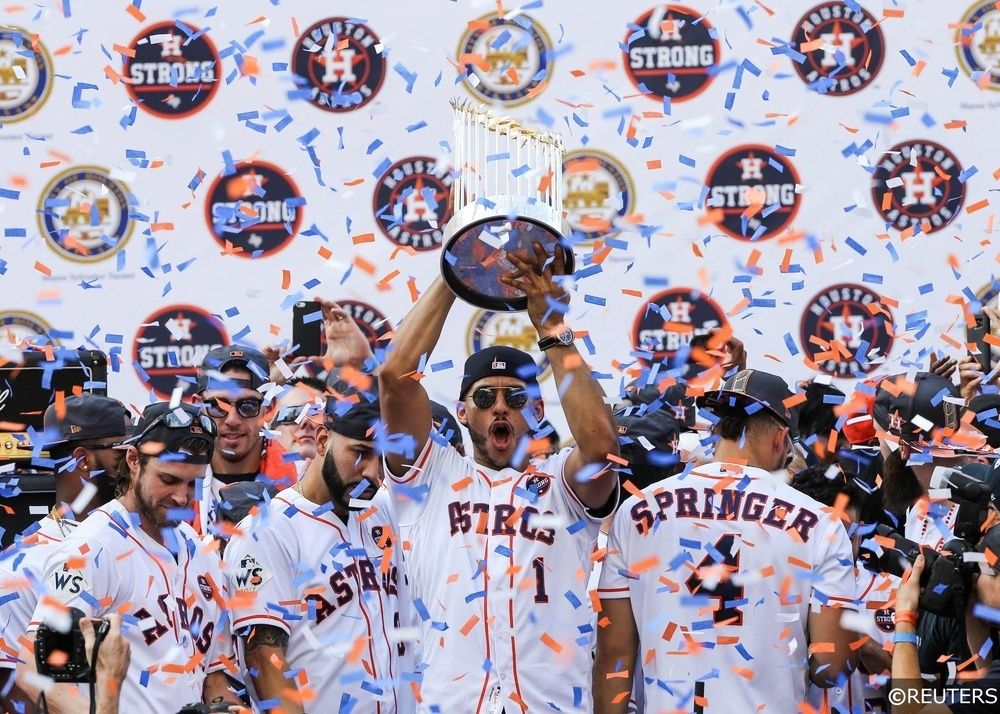 The 2019 MLB postseason field is set as the playoffs got underway Tuesday with the NL Wild Card Game, with the true action coming in on Thursday with the start of the NLCS (Find All MLB Playoff Picks Here). Eight teams now have their sights on the Commissioner’s Trophy, as Pickswise discusses the only team you should be betting to win this World Series. Along with winning with our daily MLB Best Bets (Click Here To View Best Bets), it is time to start slamming the bookies with this team to win it all. Even though there are a lot of reasons to choose a dark horse candidate, the Houston Astros +200 is the team to jump on during the playoffs.

After the All-Star break, this Houston Astro’s lineup has been on a mission to claim bragging rights as the best lineup in the league, even better than the Golden Boy Yankees, and the numbers clearly support that. Since the All-Star break, the Astros rank 1st in hits, 1st in runs, 2nd in home runs, 1st in RBI, 1st in batting average, 1st in on-base %, 1st in slugging %, 1st in OPS and 2nd in extra-base hits. They’ve also been extremely disciplined at the plate since then as they rank 1st in walks and 29th in strikeouts. I could literally keep ongoing, but I think you get the gist of it. That is a pretty phenomenal feat, but it doesn’t come as a surprise with the guys that they have in the lineup.

They have one of the best leadoff men in baseball with George Springer, two of the best hitters in the game with Jose Altuve and Michael Brantley, while Alex Bregman has made his case for MVP after posting 41 home runs, 122 runs, 112 RBI, .296 BA, and a 1.015 OPS. They also called up a promising rookie in Yordan Alvarez mid-way through the season and he has done nothing but produce for this stacked team; posting 27 home runs, 58 runs, 78 RBI and 1.067 OPS in just 369 plate appearances. If they can keep their All-Star shortstop Carlos Correa healthy, then I wish the rest of the teams the best of luck because they are going to need it.

Of course, the Astros did just fine without him, but with him back in the lineup, every opposing pitcher will literally never get a break as the Astros lineup is stacked up-and-down the order with All-Star potential. Even their “bench” pieces have been amazing where Yuli Gurriel, Robinson Chirinos, and Josh Reddick have combined for 62 home runs, 199 runs, and 218 runs batted in.

This Astro’s lineup hasn’t gotten the recognition that the Yankee’s lineup has gotten, but that is alright because flying under the radar usually works out better for teams as compared to always being in the limelight. This lineup is oozing with talent, and they are uber disciplined at the plate, so opposing pitchers are going to have a hard time trying to contain this lineup. Add that lineup with one of the best pitching staffs in the league, and you could be in for long nights and short series.

As if the Astros did not already have enough pitching, they went out and got right-hander Zack Greinke from Arizona at the trade deadline this summer. For a team intent on winning its second World Series in the span of three years, maybe owning the best rotation in baseball was not going to cut it. Boasting the undisputed best staff in baseball was the only option for the Astros, and that is exactly what they do heading into the 2019 playoffs.

If the Astros want to utilize a three-man rotation, they can trot out all-star after all-star in Greinke, right-hander Justin Verlander, and right-hander Gerrit Cole (not in that order, as Greinke is the obvious No. 3 behind his two teammates who have duked it out for American League Cy Young Award honors). Verlander went 21-6 with a 2.58 ERA and 300 strikeouts in 223.0 innings. Cole compiled a 20-5 record to go along with a 2.50 ERA and 326 strikeouts in 212.1 innings. Greinke’s numbers (18-5, 2.93 ERA) included an 8-1 mark and 3.02 ERA with Houston.

But why not go with a four-man rotation? That is likely what the Astros will do, as they also have left-hander Wade Miley at their disposal and they can expect to enjoy a lead most of the way in any series they play and therefore don’t have to do anything desperate like send starters to the mound with little rest. Miley went 14-6 with a 3.98 ERA during the regular season.

Houston could use Miley, right-hander Brad Peacock (4.12 ERA), and right-hander Jose Urquidy (3.95 ERA) to bolster the bullpen throughout the postseason. Starters are no stranger to changing roles in the playoffs and the ‘Stros have more than a few arms who can do so with Verlander, Cole, and Greinke shouldering the rotation load.

That is a real possibility because—relative to the rest of the well-oiled machine that is Houston—the bullpen is a slight weakness, at least in terms of depth. Ryan Pressly, Will Harris, and closer Roberto Osuna are the most reliable of the relievers. Pressly (2.32 ERA in 54.1 innings) has not allowed a single run in his last seven innings of work. Harris (1.50 ERA in 60.0 innings) was awesome the whole season has been especially on fire of late (zero runs allowed in 8.1 innings in September). Osuna (2.63 ERA in 65.0 innings, 38 saves in 44 chances) has hurled 10.1 consecutive scoreless innings.

As strong as the Astros’ lineup is, their three borderline unhittable starters and three lockdown relievers are perhaps the biggest reasons why they outscored opponents by a ridiculous 280 runs in 2019—and why they are a clear choice to win the World Series.