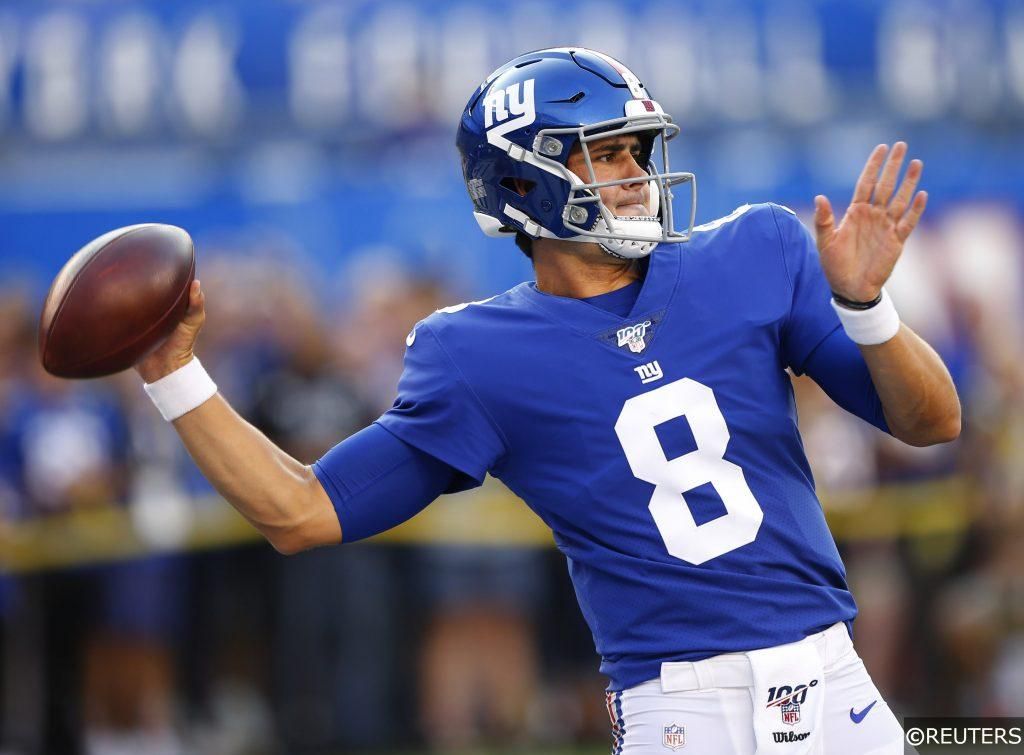 It’s that time of year again where bettors try to outlast each other in possibly the greatest NFL event. Welcome to the 2019 NFL Survivor Pool Picks. NFL Week 10 is upon the betting community which means it is crunch time to win as many NFL Picks to stay alive.

The New York Jets have officially hit rock bottom as they fell to the team that is tanking this season, the Miami Dolphins. Now head coach Adam Gase and the Jets are looking like a colossal failure this season as they try and regroup for this huge New York matchup. To make matters worse, quarterback Sam Darnold has regressed under the guidance of the new coaching staff. With Darnold falling apart, you would think the Jets would rely a lot on star running back Le’Veon Bell. However he has been pushed to the side and he comes into this game carrying a knee injury, but reportedly will be able to play through a knee injury this Sunday. he’s hardly been a savior though at 3.3 yards per carry with only one touchdown in 125 rushes for 415 yards.

The Jets are a lost cause right now and there is no reason to try and back them against a Giants football team that is looking to get better every day for the great future they have. Two days ago the Jets placed free-agent cornerback Trumaine Johnson on injured reserve with a pair of injured ankles and now cornerback Darryl Roberts, suffered a non-contact calf injury during practice on Thursday. The Jets do not have a defense at all right now as the Giants should be a prime choice in the survivor pool.

Last week, we picked the Raiders as they played the horrible Lions defense, might as well target them again. This is a bitter NFC North clash as the Chicago Bears host the Detroit Lions in a game both teams desperately need to win. The Bears are coming off an embarrassing loss to the Eagles in which their offense struggled just to obtain positive yardage, while the Lions lost a last-second heartbreaker to the Raiders. For a few reasons, I think the Bears are going to be able to get back on track here. Yes, they struggled against Philadelphia, but the Eagles’ defense is better than a lot of people realize. Detroit’s defense is an absolute mess right now, and I think Mitchell Trubisky will finally be able to have some success. Lions cornerback Darius Slay straight-up blasted Detroit’s coaching staff after their most recent loss, which is never a good sign. It seems like the locker room might be falling apart again, and if so then all bets are off. I don’t think Matthew Stafford is going to have much success here on the road against an elite Chicago defense, and I think the Bears will win this one pretty easily as it is one of our Week 10 NFL against the spread best bets.

The Dallas Cowboys host the Minnesota Vikings on Sunday Night Football. In Week 9, Minnesota lost a close one on the road against the Chiefs, while the Cowboys beat the Giants. It’s tough to bet on Kirk Cousins in a primetime game, but you have to do it here. The Cowboys are being overrated in the marketplace, and let’s not forget that this team just lost to the lowly New York Jets a couple of weeks ago. This offense has struggled mightily when they’ve had to play actual top defenses, and they’re running into one here in Minnesota. I think the Vikings are going to be able to have some success on the ground here with Dalvin Cook, and I’m not holding their loss to the Chiefs against them considering Arrowhead Stadium is one of the toughest to play in across the entire league. Minnesota also has a rest advantage here as the Cowboys are playing on a short week after playing on Monday Night Football. This could be a surprise pick nobody see’s coming.

In Week 10, I’m rolling with the New York Giants. Call me crazy but this is the perfect time to select the Giants as rookie quarterback Daniel Jones should have no problem taking on a secondary that is practically playing with their 10th strings. The offense has been clicking recently, as Barkley is going to remind every Jets fan that Le’Veon Bell is nearing his last days as a Jet. This is the perfect time to pick the Giants as they should roll over the Jets.

If someone told me I could not select the Giants, I would be choosing the Bears, but I highly suggest against it as there will be a perfect time and place to pick the Bears Still, a lot of great teams to choose from. Keep them in the back pocket for when you really need them. Giants are the pick and let’s head into Week 11 ready for another week of survivor picks.

Do you want more NFL expert predictions besides Survivor picks? Pickswise is also the home to FREE Against The Spread, Over/Under picks. Win today with Pickswise.