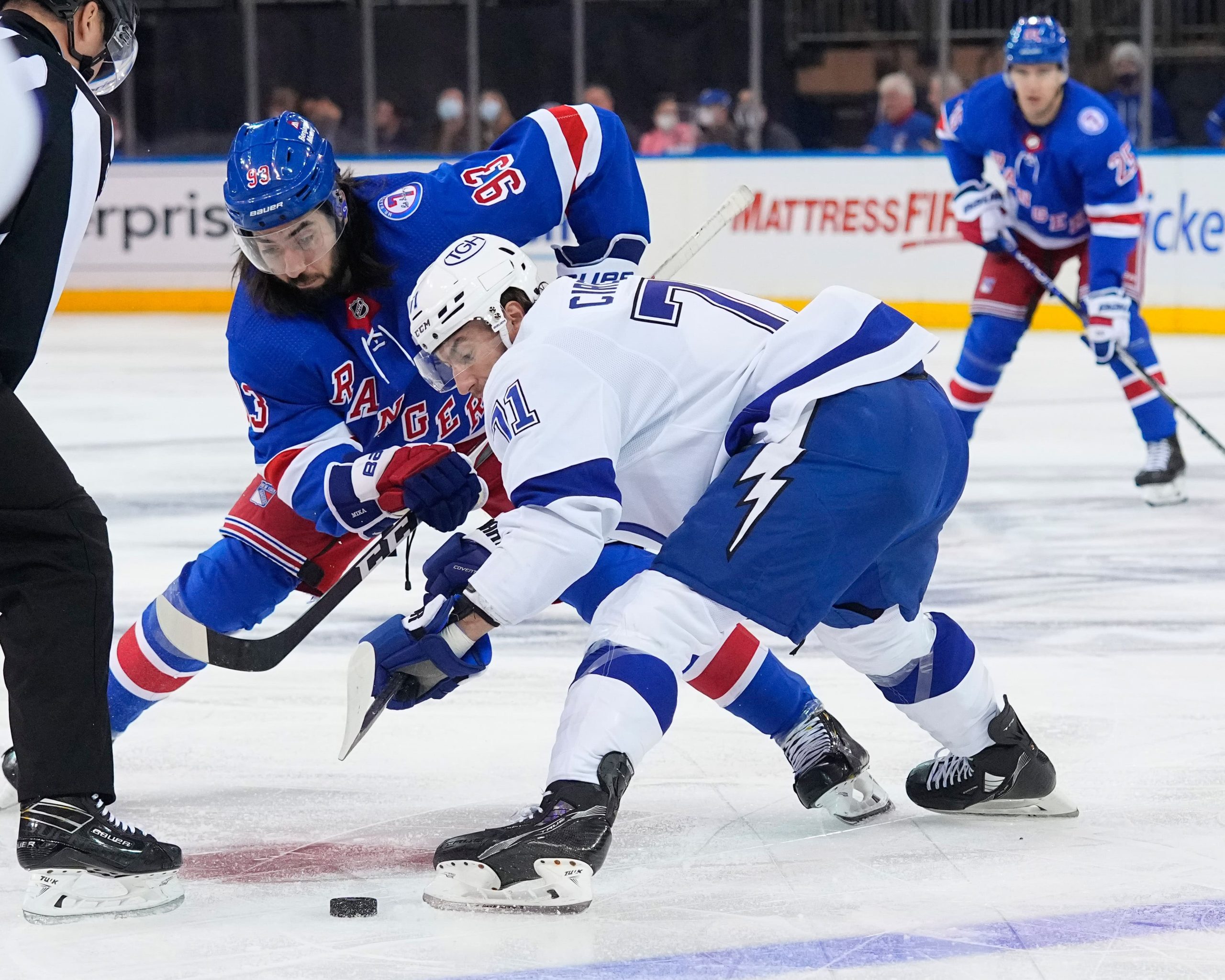 After the Rangers were able to edge out the Carolina Hurricanes in a grueling, 7-game series, their reward is facing the defending NHL champions. The Lightning have been patiently waiting and resting after sweeping the Florida Panthers in the second round. New York has had back-to-back 7-game series, while Tampa made quick work of the league’s President’s Trophy winners. Despite their dominance, it will be the Rangers with home-ice advantage in this series. Let’s break down each team and see how this series should play out.

Breaking down the Tampa Bay Lightning

The 2-time defending Stanley Cup champions have put themselves in a prime position to at the very least reach the finals for the third straight season. They’ve done so in dominating fashion after sweeping the Panthers in the second round. Florida ended the regular season with the league’s best record and was the highest-scoring team throughout the year. Such a dominant regular season is what made Tampa’s sweep all the more impressive.

A majority of that success was due to all-world goaltender Andrei Vasilevskiy. He is largely regarded as the best goalie over the past few years, and won the Vezina Trophy for exactly that in 2019. The Panthers were an absolute juggernaut offensively this season, as the only team that averaged over 4 goals per game and nearly 5 goals per game at home. Yet Vasilevskiy held Florida to just 3 goals in the entire series, including a shutout in the series-clinching game. The Lightning goaltender’s performance was nothing short of hall of fame-worthy.

Vasilevskiy won’t be the only one in this Tampa dynasty who will be heading to the hall either. Steven Stamkos, Nikita Kucherov, and Victor Hedman have been together throughout this run. They have proved that it takes a complete team on both ends of the ice to be successful, not just flashy goalscoring. Stamkos is a lifelong Lightning skater, who has been dominant for 14 seasons, including a 60-goal season and 100 points this year. While Vasilevskiy won the Vezina in 2019, Kucherov won the Hart Trophy as MVP of the league that same season after ending the year with a ridiculous 128 points. All the while there is big, bad, 6’6” Victor Hedman on the defensive side in front of their elite goaltender. Tampa’s perfect mix of talent, diversity, and depth are what make them such a dangerous team.

The Rangers took the longest possible road to get here, but they’re now just a series win away from making it to the Stanley Cup Finals. They had such a great regular season and have got this far in the postseason primarily through their defensive play. New York ended the season as the second-best goaltending team in the league, behind only the Hurricanes. Now having ousted them, they’ve remained dominant in that regard.

It should come as no surprise that their goaltender, Igor Shesterkin, all but has the Vezina Trophy on display in his home already. Vasilevskiy is a previous winner and is still regarded as the best overall, but Shesterkin has had the more dominant season. The talented Russians should make this series an epic one. The Rangers goalie ended the year with the highest save percentage among regular starters, at .935, and really showed off in his most recent performances against Carolina. He saved 37 of 39 shots in each of the last 2 games, which includes that close-out Game 7 on Monday night.

The Rangers have a solid cast of skaters in front of him as well. Longtime New Yorker Mika Zibanejad had an excellent series against the Hurricanes. He recorded a goal in 4 straight games, a streak was only snapped by having 3 assists instead in Game 7. Chris Kreider recorded 2 goals in that game after getting 52 in the regular season. That was the 3rd-most in the league, and was often assisted by Artemi Panarin. The Bread Man ended the season with 74 assists, the 4th-most in the NHL. Teammate Adam Fox was not far behind, as the 10th-highest with 63 assists. Along with their acquisition of Andrew Copp from the Jets at the trade deadline, the Rangers have 5 skaters who averaged just below or above a point per game. Those stars will need to step up if they want to make it to the finals.

The Rangers have the home-ice advantage in this series, but the oddsmakers agree that the Lightning are simply the better team. These late-round series often come down to a goaltender carrying the team. While in almost any other situation, that would be great news for Shesterkin and the Rangers. However, Vasilevskiy has been absolutely dominant. Not only did the Lightning sweep the Panthers in the second round, they did so by holding them to just 3 total goals. Florida was easily the best scoring team throughout the year, but Vasilevskiy couldn’t have cared less.

Now facing New York, he should have even less to worry about. The Rangers are a great team, but they did not get here by lighting up the scoreboard. They were in the bottom half of the league in goals per game, relying on Shesterkin to carry them. However, the Lightning have more than enough talent to penetrate New York’s defensive ability. Stamkos and Kucherov know what it takes to hoist the Cup and have been incredible veteran leaders for their team. There’s no doubt that the Rangers are capable of taking a game or two in this series, but it should be Tampa making their third straight trip to the finals.

Check out all our coverage of the NHL playoff games