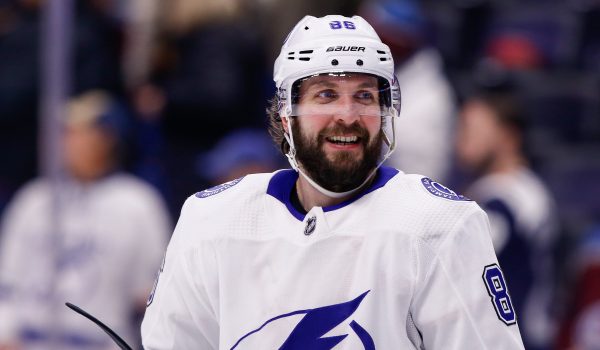 On the final day of February, the NHL has reached its toughest stretch as teams are deep in the playoff hunt. With less than two months remaining in the season its time to look at the 16 teams that will likely be playing in April, when the playoffs begin. Check out the Pickswise (see our expert picks) NHL Power 16 rankings.

Nikita Kucherov leads the Lightning’s charge and has registered a point in each of the last 17 games. Not having Steven Stamkos, who is out 6-8 weeks according to NHL.com has affected the outcomes of recent games for Tampa Bay. The Lightning are currently second in the Atlantic with 85 points.

Brad Marchand has been one of the many pieces that have led the Bruins to back-to-back wins over other top contenders in the NHL. Boston was able to overcome a two-game stretch that saw them given up 14 goals. The Bruins have likely separated themselves from the Lightning at 94 points and the Atlantic Divison lead.

St. Louis has won six straight games and has regained control of the Central Divison with a key clash against Dallas next on the schedule. Vladimir Tarasenko could be set for a return in the coming weeks since missing most of the season following surgery back at the end of October. David Perron has been too quiet for the defending champions. The Blues currently have 86 points and the division lead.

Jakub Vrana has been quite valuable in recent weeks, but the Capitals hammerlock as the best team in the Eastern Conference has slowly faded away. Washington’s power-play unit has been less than impressive. The Metropolitan Divison looks to still be in hand for the Capitals, but they have four-to-five teams right on their tail.

The Penguins west coast trip has been ugly, as they have two games against some of the league’s worst teams adding to their five-game losing streak. They will hope for a better performance in San Jose. Pittsburgh has slipped to third in the Metropolitan.

Tyler Seguin has made one of the league’s least scoring teams a player this season as the Stars have relied on him heavily. They might be in the third spot in the Central Divison, but Dallas has a chance to pick up two points as they visit St. Louis tonight. They were tied for the division lead not even two weeks ago. How quickly the standings change.

The Avalanche will benefit from a Dallas win as much as the Stars, but they will also have to take care of business against Nashville tonight. Colorado is currently second in the Central race at 83 points.

The Flyers’ five-game winning streak has helped them rise all the way to the second spot in the Metro. Well within striking distance of the division-leading Capitals, as Philadelphia has 81 points. The next two games for the Flyers are huge with the Rangers and Capitals both on the road.

The NHL’s hottest and newest team is surging once again. Eight-straight wins and seven at home has Vegas looking up at the right time. The streaking Knights have also given themselves a six-point cushion in the Pacific.

The Islanders haven’t had enough goal output from star Mathew Barzal and it has impacted a team that has slowly slipped in the standings again, as they hold only a two-point cushion in the Eastern Conference Wild Card race. They have three fellow Metropolitan teams hot on their tail. Three straight losses have New York scrambling.

The Canucks are tied for second with Edmonton in the Pacific Divison but are comfortably in the Western Conference playoff hunt. But the difference between the second-place and third-place spots in the Pacific and the Wild Card spots is a mere-point.

The Hurricanes are fighting for their lives, and they are currently on the outside looking in just two points behind Columbus in the Wild Card fight. Not having either starting goalie has proven to be difficult.

Leon Draisaitl has had a very impactful season, including being one of the three-stars of the month in January. He leads the NHL with 99 points on 37 goals and 62 assists. The Oilers have a very small hold on the third-spot out West.

The Maple Leafs may be out of the running for the Atlantic Division title as the Bruins and Lightning have separated themseleves. John Tavares is four goals away from 30 goals for a third-straight season. Toronto has a four-point cushion over fourth-place Florida in standings.

Columbus looks like the one team that won’t belong in the NHL playoffs but will still qualify, as they hold a two-point margin for the final Eastern Conference Wild Card spot. Losses in back-to-back games against the Minnesota Wild including a 5-0 shutout isn’t helping the Blue Jackets cause.

The Rangers’ playoff chances will likely come down to the final games of the season. They are playing some of the best hockey in the league right now. Goals have been a priority. New York’s roll was snapped with a 5-2 loss against Philadelphia. Their chances are thin, but they are only two points behind the Blue Jackets who currently hold the final Wild Card spot.