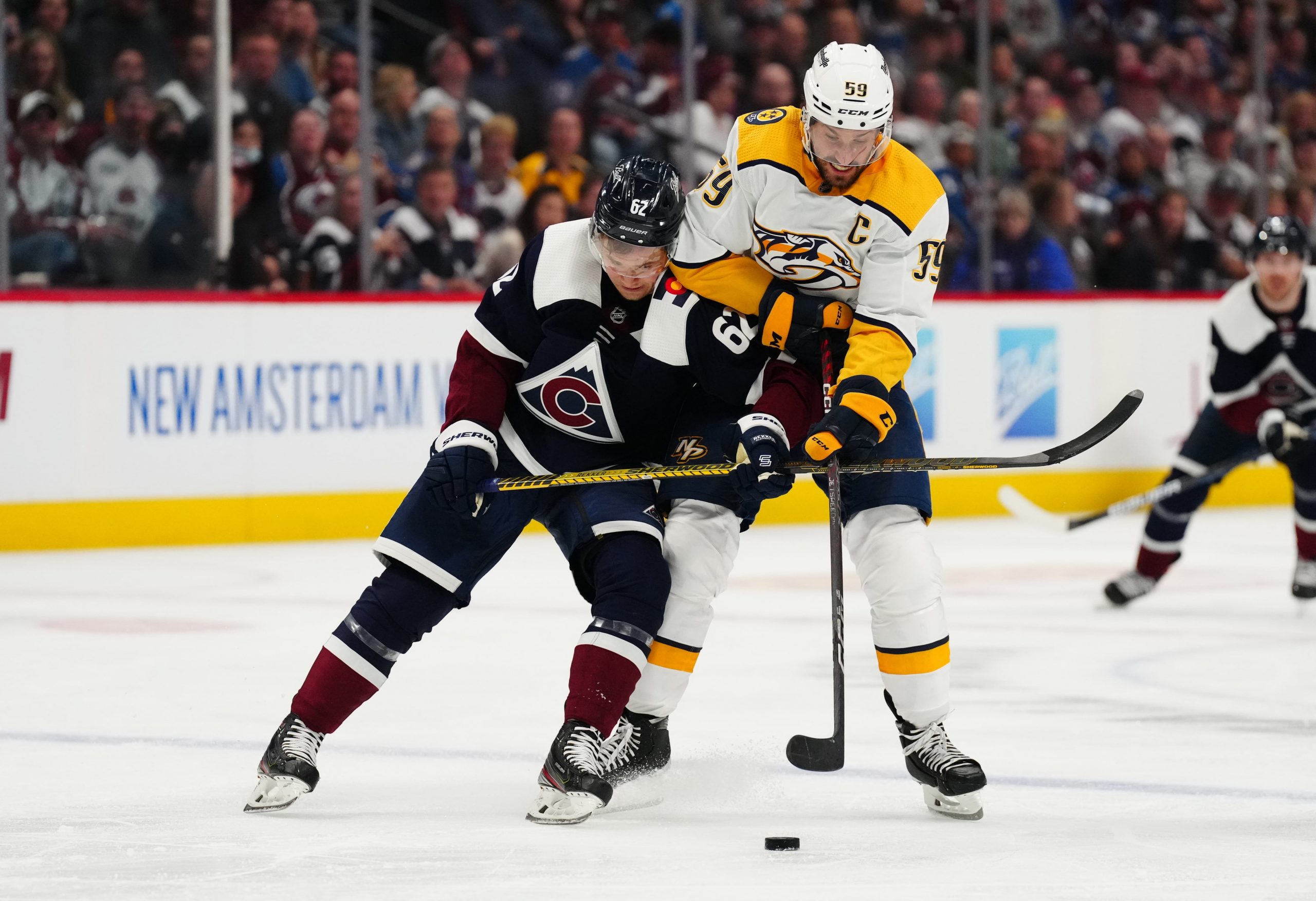 The best time of the year is finally here: the Stanley Cup playoffs. After all the preseason hype, the overachievers, and the disappointments, it all comes down to this. It’s a brand new season and as long as you made the tournament, you have a chance to hoist the Cup. The Avalanche were a wire-to-wire favorite to win the Stanley Cup and locked up the top seed in the Western Conference with ease. That means they will take on the lowest seed, Predators, in the first round. This series may be one of the more one-sided ones, but let’s dive into each team and a series prediction:

The Avalanche have a roster most franchises envy and fans would consider an embarrassment of riches. They could field an entire all-star team themselves, beginning with the skating trio of Nathan MacKinnon, Mikko Rantanen and Gabriel Landeskog. While they may not end with 100-point seasons, that is due only to missed games and not lack of talent. They are always on pace for such seasons, and are the reason why the Avalanche are a perennial high goal-scoring team. They were not quite the juggernaut of the Panthers this season, but still ended the regular season with 4.15 goals per game at home — the 2nd-best in the NHL.

Youngster Cale Makar was also a primary factor for that success. At just 23 years old, he has already set franchise records for goals (28) and points (86) by a defenseman. With Colorado’s rich history, those are amazing accomplishments. Paired with Devon Toews, the Avalanche have one of the best combinations of blue-liners to complement their goal-scoring trio. All of that before even the mention of Nazem Kadri. The former Maple Leaf has been an essential addition with injuries being an issue for the big 3.

That is where the Avs may encounter some hiccups. Gabriel Landeskog had surgery after the all-star break and has been out for quite some time. Mikko Rantanen also missed a handful of games with an illness before returning in the season’s last couple of games. Nathan MacKinnon has been healthy recently but also missed a portion of the season earlier in the year. While all of the superstars are set to be ready for the playoffs, it is still something worth monitoring. As long as they can remain in-tact, the Avalanche are the Stanley Cup favorite for good reason.

Breaking down the Nashville Predators

Nashville may be nicknamed the Predators, but it’s all about the elephant in the room. Starting goaltender Juuse Saros was injured in their 3rd-to-last game against the Flames. He was a key piece to their success this season, and his absence was proof of that. Calgary ended up coming back in that game to win in overtime, and that was the start of the Preds’ collapse to end the season.

They were the first wild card the entire way after the division seeds were decided. That meant they would face off against the Flames, rather than the Avalanche. Calgary is a great team, but no one would argue that Nashville would rather have taken them on instead of Colorado. All the Preds needed to do was defeat the league-worst Arizona Coyotes in the season finale to hold off the Dallas Stars from overtaking them in the standings. However, without Saros they were unable to do so and now find themselves in their current situation.

That does not mean they are completely doomed. They too have an excellent trio of skaters in Filip Forsberg, Matt Duchene and Roman Josi. Even as a defenseman, Josi broke the franchise records for assists, and led the team in shots this season with 281. He also broke the franchise record for points in a season with 96, nearly reaching that coveted century mark. Filip Forsberg is a perennial all-star as well, proven by the fact he broke the franchise record for goals this season, ending the regular season with a career total of 220. Matt Duchene has come into his own, as well. His okie-doke moves even had him finish ahead of Forsberg in both goals and assists by 1, with 43 of each. If Saros can get healthy to back them up, the Preds are more than a formidable opponent.

Also check out our previews for the other series in the western conference: Flames vs Stars, Oilers vs Kings, and Wild vs Blues

Unfortunately for Nashville fans, their chances in this series were already slim and the status of Saros does not sound optimistic. The Avalanche will have home-ice advantage in the series, which is a huge benefit with their goal-scoring efficiency in Denver. The Predators do play better in Nashville, but still are barely above 3 goals per game in their home arena. One thing that should bring optimism to Preds fans, is that they lead the regular season series against the Avs, 3-1-0. However, the Avalanche are still worth the -420 price for this series.

With such a heavy favorite, it would be more appropriate to bet the Avalanche and a specific amount of games. Even with the Predators head-to-head record advantage, it’s worth noting that the most recent victory was the penultimate game of the season with Colorado resting most of their starters. The other 2 wins were without Landeskog in the lineup and were games in Nashville. Let’s not forget the biggest factor; those matchups also had Juuse Saros healthy. Still, Josi and company have the confidence and knowledge that they can beat even the Stanley Cup favorites. They should be able to steal a game from the Avalanche in Nashville, but ultimately Colorado should take this series without needing too many games.

Be sure to check out all of our previews and picks