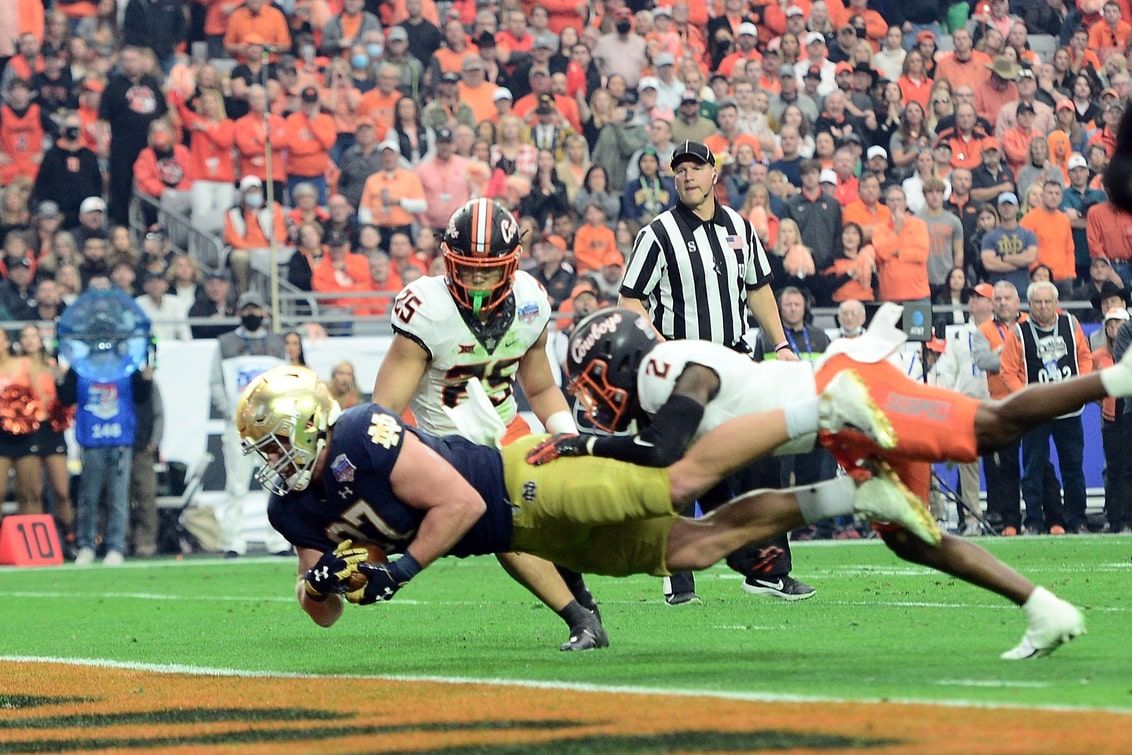 Brian Kelly, the winningest coach in Notre Dame football history, resigned from his position after the 2021 regular season to go to LSU for a new beginning. First-time head coach and former defensive coordinator Marcus Freeman takes over in South Bend and hopes to lead Notre Dame to a place Kelly could not – a national championship.

Will there be regression under Coach Freeman? With the season just a few weeks away, it is time to break down the Notre Dame Fighting Irish.

The Fighting Irish are listed at 45/1 to win the National Championship. They are 1 of 9 teams with odds under 50/1.

The 2021 season got off to a rocky start for the Fighting Irish, as they beat Florida State and Toledo by a combined 6 points in the first two weeks. They looked much better against Purdue and Wisconsin in Weeks 3 and 4, as they jumped out to a 4-0 start to the season along with a top 10 ranking. Notre Dame then lost its only game of the regular season when Cincinnati came to town. The Bearcats were the only team to hold Notre Dame, who averaged 35.2 points per game, under 27 points. The Fighting Irish won their final 7 regular season games, and then Coach Kelly left for Baton Rouge.

With Coach Freeman at the helm and 11 of its 13 top producers returning from last season, the Notre Dame defense should be a force to be reckoned with in 2022. While this year’s schedule is more difficult than last, the Fighting Irish were a top 15 defense and held their FBS opponents to less than 20 points per game. Bertrand and Foskey are back in South Bend for their senior seasons and will lead a talented group of defensive linemen and linebackers. The secondary is a bit of a question, but projected starters TaRiq Bracy and Cam Hart should be improved after gaining ample experience last season. Losing safety Kyle Hamilton to the NFL will be difficult to overcome, but Northwestern transfer Brandon Joseph should make things easier.

Offensively, Notre Dame will look quite different. Quarterback Jack Coan exhausted his eligibility while Kevin Austin and Williams both moved on to the NFL. Tight end Michael Mayer remains in South Bend and seems to be carrying on the tradition of Notre Dame being a tight end factory, as he caught 71 passes for 840 yards and 7 touchdowns last season. With an unproven group of wide receivers, Mayer will be called upon early and often in the passing game. Coan is likely to be replaced with an inexperienced but mobile quarterback in sophomore Tyler Buchner, while Williams will be replaced with Chris Tyree and Logan Diggs – who combined for 766 total yards and 7 touchdowns a season ago.

The line will likely be the strength of this offense, as it returns 4-5 experienced pieces from last year. The offense could regress from its 18th-best scoring performance in 2021, but a mobile quarterback with a good offensive line could make for an exciting season in South Bend.

With teams such as Ohio State, BYU, Clemson and USC on the schedule, the Fighting Irish will have their work cut out for them in Coach Freeman’s first full season as head coach. They will face 3 of those opponents away from home, but with so much production returning from a top 15 defense, Notre Dame has the talent to slow down college football’s elite offenses. The Fighting Irish will benefit from not having road games in back-to-back weeks at any point this season and will enjoy a bye week before a neutral site showdown against BYU in early October. So long as Buchner can stay healthy and effectively lead the offense behind a stout offensive line, Notre Dame should be able to beat at least 1 of its 4 toughest opponents and take care of business against its inferior opponents.